WORLD Trump: Mattis out as of Jan. 1; deputy to be acting chief

Trump: Mattis out as of Jan. 1; deputy to be acting chief 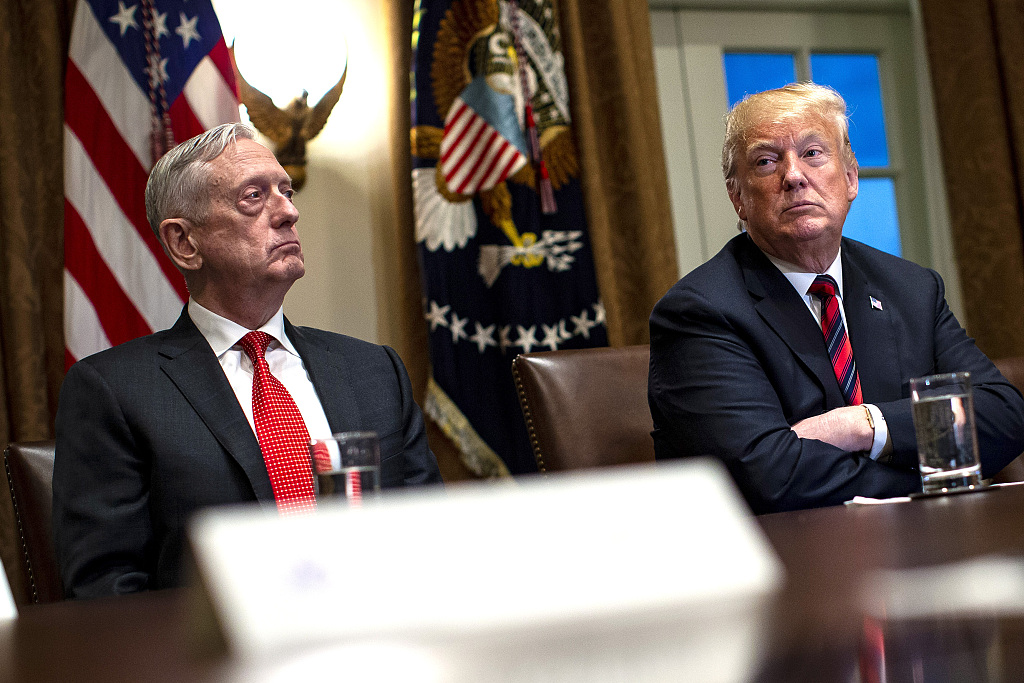 US President Donald Trump waits to speak while seated next to Jim Mattis, US secretary of defense, during a briefing with senior military leaders in the Cabinet Room of the White House, Oct. 23, 2018. (File photo: VCG)

Irritated with the criticism and fallout from Defense Secretary Jim Mattis’ resignation, US President Donald Trump on Sunday pushed the Pentagon chief out the door two months earlier than planned.

In a series of tweets, Trump appeared to question why he had put Mattis in his Cabinet in the first place and said Deputy Defense Secretary Patrick Shanahan will take over as acting secretary on Jan. 1 to cover the accelerated departure.

Secretary of State Mike Pompeo, not the president, notified Mattis of the decision, said a senior administration official who insisted on anonymity to discuss personnel issues.

The sudden change strips Mattis of any chance to further frame national security policy or smooth rattled relations with allies through the originally planned transition at the end of February. And it reflects White House displeasure with the retired Marine Corps general’s blistering resignation letter, which he delivered to Trump on Thursday.

Mattis resigned in protest over Trump’s decision to pull all US troops out of Syria. US officials, however, said that the reaction to his decision to leave — including the shock and dismay expressed on Capitol Hill — annoyed Trump and likely led to Mattis leaving earlier than planned.

“When President Obama ingloriously fired Jim Mattis, I gave him a second chance. Some thought I shouldn’t, I thought I should,” Trump tweeted Saturday, foreshadowing his displeasure and the Sunday announcement. He also fumed over the media coverage of his Syria withdrawal order, suggesting he should be popular for bringing troops home.

“With me, hit hard instead by the Fake News Media. Crazy!” Trump tweeted.

A White House official said Trump decided Mattis should leave the administration earlier than planned to avoid a drawn-out transition when someone on hand whom they consider a qualified deputy capable of running the Pentagon in an acting capacity. The official asked not to be identified publicly discussing personnel matters.

It is unusual for the Pentagon to have an acting secretary of defense. Historically when a secretary has resigned, he has stayed on until a successor is confirmed. For example, when Chuck Hagel was told to resign in November 2014, he stayed in office until Ash Carter was confirmed the following February.