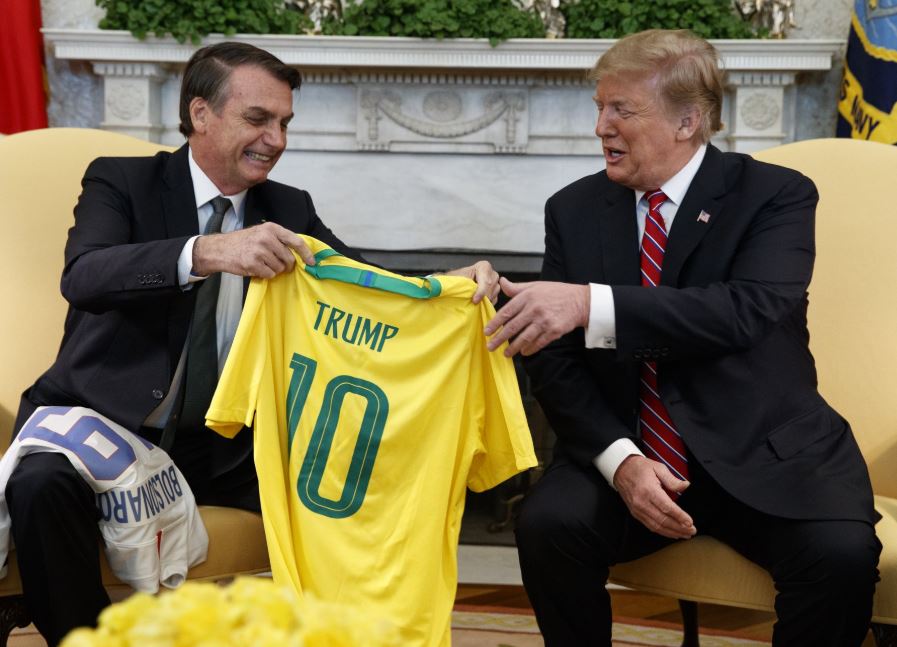 Trump praised Brazil’s President Jair Bolsonaro as the two sit down in the Oval Office, saying Bolsonaro has done “a very outstanding job.” He also says Bolsonaro “ran one of the incredible campaigns” and is “honored” it was compared to his.

Trump says the leaders will discuss trade, the unrest in Venezuela and other subjects and that Brazil and the US have never been closer.

Brazil has been seeking the status of “major non-NATO ally,” which is a step short of full NATO membership. That would allow certain financial advantages not available to non-NATO members.

Brazil’s new president, who has been dubbed the “Trump of the Tropics,” has arrived at the White House for meetings with President Donald Trump.

Trump greeted the hard-right Jair Bolsonaro shortly after noon. Bolsonaro arrived with a large entourage that filed into the West Wing after him.

The leaders will be sitting down for meetings and participating in a working lunch before holding a joint press conference.

During his campaign, Bolsonaro pledged to build closer ties with the US and mimicked Trump’s “America First” catch phrase, pledging to put “Brazil First.”

The two leaders are expected to discuss a range of issues, including ways to increase US private-sector investment in Brazil and resolve the political crisis in Venezuela.

The Brazilian leader who has been dubbed the “Trump of the Tropics” is ready for his first White House visit.

President Donald Trump will meet Tuesday with Brazil’s new president, the hard-right Jair Bolsonaro. The two leaders are expected to discuss a range of issues, including ways to increase US private-sector investment in Brazil and resolve the political crisis in Venezuela. Both leaders are fierce critics of Venezuela’s socialist President Nicolas Maduro.

Bolsonaro pledged during his campaign to build closer ties with the US and has often expressed admiration for Trump. He sought to underscore his pro-America stance with a tweet upon his arrival Sunday.

Bolsonaro succeeded a leftist who at times had a frosty relationship with the United States. His insurgent, social media-powered campaign has been likened to Trump’s 2016 effort. Like Trump, he painted himself as representing “the people” standing up against “the elite,” blasted unflattering stories as ” fake news,” and mimicked Trump’s “America First” catch phrase, pledging to put “Brazil First.”