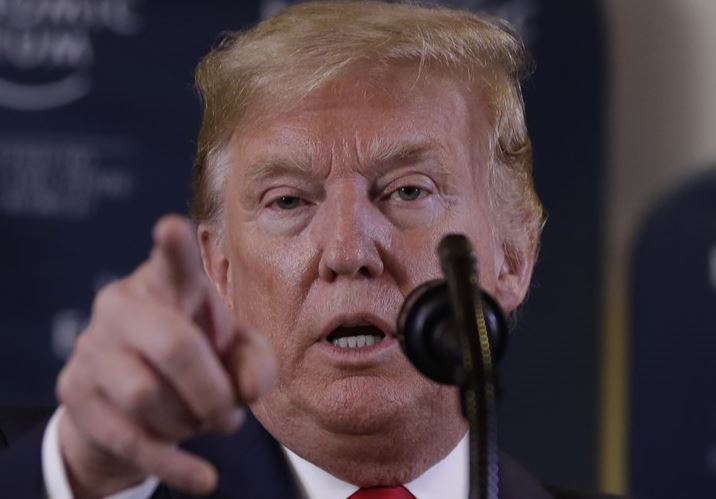 US President Donald Trump hinted that sanctions on Iraq were still a possibility in a bilateral meeting with Iraq’s president Wednesday, the first since a US drone strike on Iraqi soil killed a top Iranian general, straining Washington-Baghdad ties.

Iraq’s President Barham Saleh met with Trump on the sidelines of the annual World Economic Forum in Davos, Switzerland amid threats from Iran-backed militia groups promising to exact revenge should he sit down with the American president.

It was the first high-level meeting since the Jan. 3 US drone strike that killed Iranian Gen. Qassem Soleimani and senior Iraqi militia commander Abu Mahdi al-Muhandis near Baghdad’s airport. The attack provoked the ire of Iraqi officials across the political spectrum and lead to the passing of a non-binding resolution to oust US troops from Iraq.

In response, Trump threatened sanctions in Iraq, which would have profound and devastating effects on the country’s economy if realized.

Trump said Washington and Baghdad have had “a very good relationship” and that the two countries had a “host of very difficult things to discuss,” in remarks to reporters.

Asked whether the administration was still considering slapping sanctions on Iraq, Trump said: “We’ll see what happens because we have to do things on our terms.”

“And we’re also involved with them in their oil business, and that’s always been very important from their standpoint and from our standpoint. So we have a lot of very positive things to talk about,” said Trump.

Asked whether there was a plan for US troops to remain in Iraq, Trump said: “We’re down to 5,000. So we’re down to a very low number -- historically low. And we’ll see what happens.”

There are approximately 5,200 US troops in Iraq advising and assisting Iraqi security forces in the fight against the Islamic State group.

The bilateral meeting came amid threats from Iraqi militia group Kataeb Hezbollah, backed by Iran, which warned Saleh to avoid meeting Trump or not to return to Baghdad, in statements posted online. The same group threatened lawmakers from voting against the resolution to oust US troops.

A march organized by supporters of influential Shiite cleric Moqtada al-Sadr in favor of pushing out American troops was set for Friday in Baghdad. It has the backing of both Hadi al-Ameri, head of the parliamentary Fatah bloc, as well as Iran-backed militia leader Qais al-Khazali, the head of Asaib al-Haq. Al-Sadr’s party won the largest number of seats in Iraq’s 2018 federal election.

In statements published on YouTube, Khazali said “2020 is the year of ending the US occupation.”