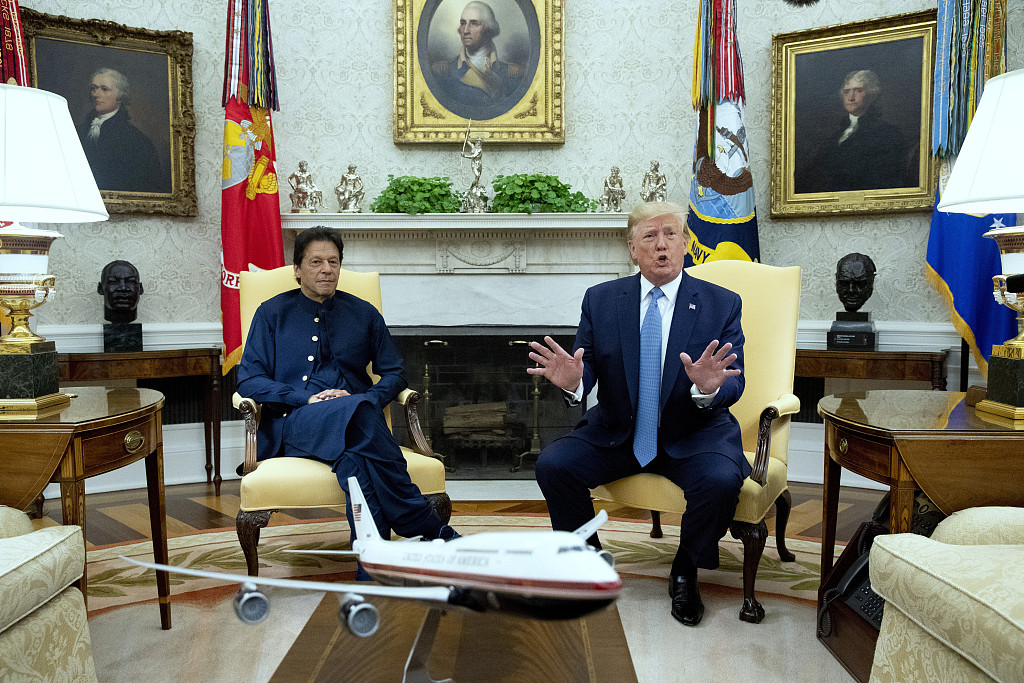 Trump and Khan, who is on his first visit to the United States since taking office in August, discussed the terrorist threat against regional stability and "ways in which Pakistan can support a peaceful resolution to the conflict in Afghanistan," said the White House in a statement released after the meeting.

The two leaders agreed that bilateral economic engagement would be mutually beneficial "when the United States security concerns are addressed," the statement added.

Washington and Islamabad have long been at odds over each other's approach to securing the region and the protracted US war in Afghanistan.

The United States announced last year the cancellation of the 300-million-US-dollar aid to Pakistan over what the American claims the country's "lack of cooperation" with Trump's South Asia strategy.

Trump said on Monday that the suspended US aid to Pakistan could "come back," depending on "what we work out."

While speaking to reporters, Trump also touched upon the idea of the United States mediating between Pakistan and India on the Kashmir disputes, an offer that was reportedly rejected swiftly by India later.

The US president grumbled about the US military presence in Afghanistan which started in 2001, calling it "ridiculous." "We are continuing to reduce troops in Afghanistan," he said.

For his part, Khan told reporters that there is no military solution in Afghanistan, and he hoped that the Taliban will be urged to speak to the Afghan government and come to a political solution "in the coming days."

US special envoy for peace in Afghanistan Zalmay Khalilzad concluded the latest round of talks with the Taliban negotiators a few weeks ago in Qatar. He was cited by reports as saying that the Afghans are closer to reaching peace than any time in the past.

The United States and Pakistan have been allies in the war against terrorism since 2001, when the United States launched attacks in Afghanistan to eradicate al-Qaida militants and overthrow the Taliban.