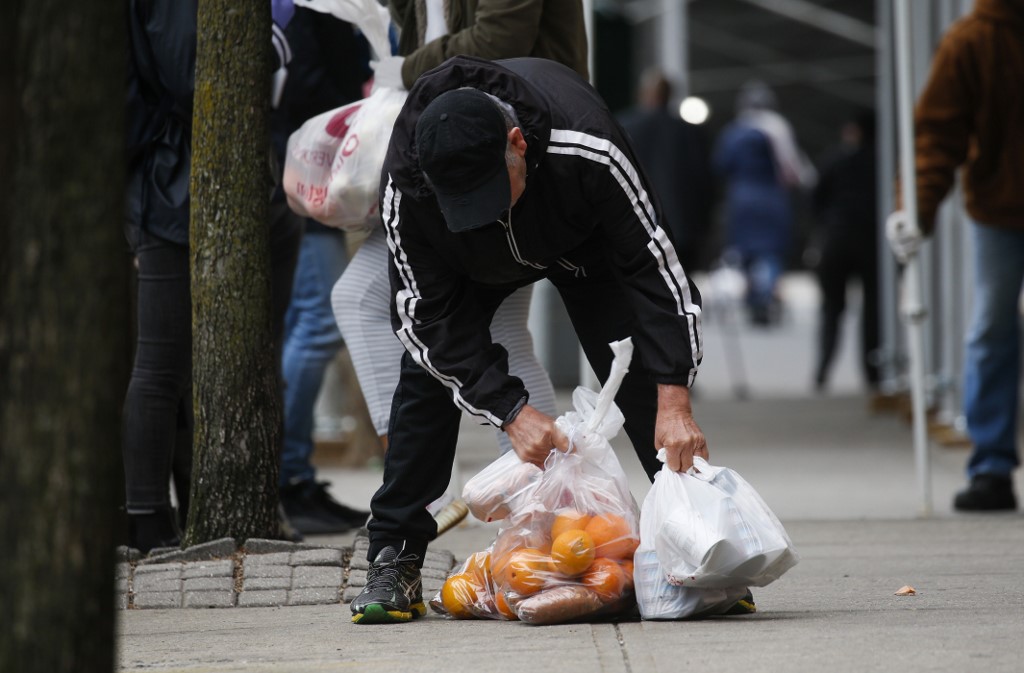 In this file photo taken on March 28, 2020, a man carries bags with food as Volunteers from City harvest distribute food in Harlem in New York City. (Photo: AFP)

Lawmakers and the White House are unlikely to finalize a new stimulus plan before the November election, US Treasury Secretary Steven Mnuchin said Thursday, even as his boss President Donald Trump indicated he may raise his offer.

But there were signs late in the day that the impasse might be easing, after Mnuchin said the administration would agree on a national testing plan Democrats have called for in the package to help ease the damage from the Covid-19 pandemic, according to an aide to House Speaker Nancy Pelosi.

It was a small but potentially significant step after months of fruitless talks on a successor to the $2.2 trillion CARES Act approved in March as the pandemic was taking hold.

Key provisions of that package have expired, depriving small businesses of support and sparking mass layoffs by US airlines.

But with the November 3 election drawing ever nearer and Democrats and Republicans still arguing over how much to spend and in what form, Mnuchin acknowledged the talks are facing tough odds.

"A deal would be hard to get done before the election, but we're going to keep trying," he said in an interview on CNBC, adding that "there are significant issues."

The Democrat-controlled House of Representatives recently approved a $2.2 trillion bill to boost the virus-damaged economy, but the latest White House proposal was for $1.8 trillion, and Pelosi called it insufficient.

Trailing badly in national polls behind Democrat Joe Biden and as record numbers of voters are casting their ballots early, with signs the tally favors Trump's challenger, the president has turned cheerleader for a rescue package.

Despite abruptly shutting down the talks last week, and then quickly reversing course, Trump said he would support a bigger stimulus plan.

"I would pay more, I would go higher," he said in an interview with Fox Business Network.

The two officials spoke for nearly 90 minutes and "The Secretary stated he would accept Democrats' language for a national strategic testing plan with 'minor' edits," Hammill said.

Pelosi said in an interview on MSNBC late Wednesday that a new bill must have a "clear plan to crush the virus" as well as funds for education and to protect worker safety.

The stimulus talks have dogged Wall Street in recent days as traders began realizing new economic government spending may not be approved any time soon, but the Dow regained some ground after Trump's comments, closing flat Thursday.

The CARES Act has been credited with boosting consumption and keeping small businesses afloat through a program of loans and grants, but those measures have lapsed.

A separate program to stop airlines from laying off workers amid a collapse in travel during the pandemic expired at the start of October, and major carriers have since furloughed around 32,000 employees.

But Senate Republicans have balked at the high price tag for the stimulus plan, and called for smaller, narrowly targeted measures.

Senate Majority Leader Mitch McConnell signaled opposition to spending anywhere near what Trump has proposed, replying "I don't think so" when asked at a press conference if he would bring the measure up for a vote.

Pelosi also dismissed the ruling party's newfound concerns about the price tag, and Hammill said she urged Trump to "weigh in" with McConnell.

"The GOP gave a $150 billion tax giveaway to the wealthiest in America, but now claim we cannot afford to provide expanded benefits for the unemployed," the House leader tweeted referring to provisions in the CARES Act.

The IMF's chief economist told AFP this week another $2.2 trillion injection of stimulus would boost US GDP growth by two percentage points next year, over the 3.1 percent GDP rise currently forecast.

On Thursday IMF Managing Director Kristalina Georgieva said she had faith that lawmakers would eventually get a spending package passed.

"Let's see how quickly it would be deployed, but I have no doubt it will be deployed, because it is necessary before the end of the year," Georgieva said during a debate on the global economy.