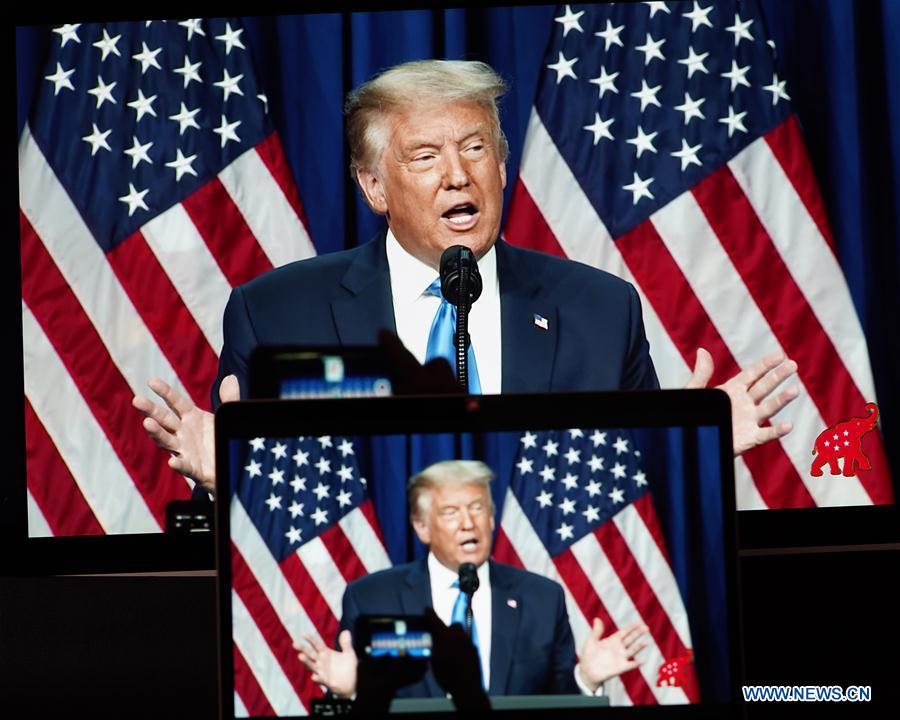 WASHINGTON - US President Donald Trump was nominated for a second term on Monday at the 2020 Republican National Convention (RNC) in Charlotte, North Carolina, which has been scaled back due to the coronavirus pandemic.

Trump arrived at the Charlotte Convention Center on Monday afternoon, where over 300 delegates met in person for a roll call vote to formally nominate him and Vice President Mike Pence for the 2020 Republican presidential ticket.

"I felt an obligation to come to North Carolina," Trump told the delegates inside a ballroom during the unannounced trip. "It's a place that has been very good to me."

In rally-style remarks, the president touted achievements of his first term, focused on his administration's response to the pandemic, again attacked mail-in voting, and lashed out at Democrats who held their national convention virtually last week and some media outlets' coverage of the RNC.

He also touched upon a series of policy priorities for the next four years if he is re-elected, including creating jobs, cutting taxes, lowering drug prices, and continuing the military buildup.

The nomination was part of the four-day RNC themed "Honoring the Great American Story," with each night having a sub-theme. On Monday, it is "Land of Promise," which a Trump campaign official said honors "the promises President Donald J. Trump has kept since his first presidential campaign."

Speakers for the RNC's opening night will include former US Ambassador to the United Nations Nikki Haley, Senator Tim Scott of South Carolina, and the president's eldest son, Donald Trump Jr.

Trump, who is expected to make an appearance on each of the four nights at the RNC, will deliver an acceptance speech on Thursday night from the White House South Lawn.

On Monday, a group of Republicans opposing Trump is holding "Convention on Founding Principles" in Charlotte, a gathering that organizers claimed would be an alternative to the RNC.

"Today, given what we have experienced over the past four years, it's not enough just to register our disapproval of the president," Flake said in a live video on several social media platforms explaining his decision. "We need to elect someone else in his place - someone who will stop the chaos and reverse the damage."

Biden, who formally accepted the Democratic Party's 2020 presidential nomination on the final night of its convention last week, leads Trump by 7.6 percentage points nationally, according to the RealClearPolitics polling average. Trump, however, has repeatedly dismissed polls showing him falling behind.