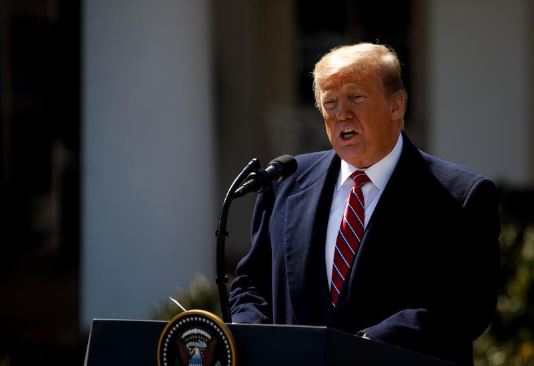 WASHINGTON, March 19 (Xinhua) -- US President Donald Trump on Tuesday indicated that he may support Brazil to join the North Atlantic Treaty Organization (NATO) and the Organization for Economic Co-operation and Development (OECD), as the two nations expected to further their economic cooperation.

Trump said at the White House while meeting with his Brazilian counterpart Jair Bolsonaro that "we're going to look at that very, very strongly in terms of whether it's NATO or it's something having to do with alliance."

The United States was reportedly to give Brazil a major non-NATO ally status, which will give Brazil preferential access to the purchase of US military equipment and technology. Trump's verbal statement on Tuesday may indicate a step further than that.

The US president also said he supports Brazil to join the OECD.

"Brazil and the United States have never been closer than we are right now," he told Bolsonaro.

Later in a press briefing, Trump repeated his intention, saying that he would like to "to designate Brazil as a major non-NATO ally - or ... maybe a NATO ally. I'll have to talk to a lot of people but maybe a NATO ally - which will greatly advance security and cooperation between our countries."

He added that "President Bolsonaro and I are both committed to reducing trade barriers."

However, a joint statement from Trump and Bolsonaro issued later by the White House confirmed that Trump announced the US intent to designate Brazil as a major non-NATO ally, and "noted his support for Brazil initiating the accession procedure to become a full member of the OECD."

The two presidents also "agreed to deepen their partnership through the United States-Brazil Security Forum to combat terrorism, narcotics and arms trafficking, cybercrimes, and money laundering, and they welcomed two new arrangements to enhance border security," according to the statement.

Bolsonaro announced Brazil's intent to exempt US citizens from tourist visa requirements, and Trump agreed to take the steps necessary to "enable Brazil to participate in the Department of Homeland Security's Trusted Traveler Global Entry Program."

Trump welcomed the earlier signing of a technology safeguards agreement that will enable US companies to conduct commercial space launches from Brazil, as well as an agreement between the US National Aeronautics and Space Administration and the Brazilian Space Agency to launch a jointly developed satellite in the near future, according to the agreement.

The two leaders also agreed to build a Prosperity Partnership "to increase jobs and reduce barriers to trade and investment."

To this end, they decided to enhance the work of the United States-Brazil Commission on Economic and Trade Relations, created under the Agreement on Trade and Economic Cooperation, "to explore new initiatives to facilitate trade investment and good regulatory practices."

Regarding bilateral trade, Bolsonaro announced that Brazil will implement a tariff rate quota, allowing for the annual importation of 750,000 tons of American wheat at zero rate.

In addition, the United States and Brazil agreed to "science-based conditions" to allow for the importation of US pork.

In order to allow for the resumption of Brazil's beef export, the United States agreed to expeditiously schedule a technical visit by the US Department of Agriculture's Food Safety and Inspection Service to audit Brazil's raw beef inspection system, as soon as "it is satisfied with Brazil's food safety documentation."

The two presidents have instructed their teams to negotiate a Mutual Recognition Agreement concerning their Trusted Trader programs, which will reduce costs for American and Brazilian companies, the White House said.

The two leaders also welcomed the creation of a 100-million-dollar Biodiversity Impact Investment Fund that will "catalyze sustainable investment in the Amazon region."

Regarding energy cooperation, the two leaders agreed to establish a US-Brazil Energy Forum to facilitate relevant trade and investment.

Before their meeting, US National Security Adviser John Bolton tweeted earlier on Tuesday that Bolsonaro's visit to the White House "is a potentially historic opportunity to redirect relations between our two countries," which will "have a profound impact not only in this hemisphere, but really around the world."