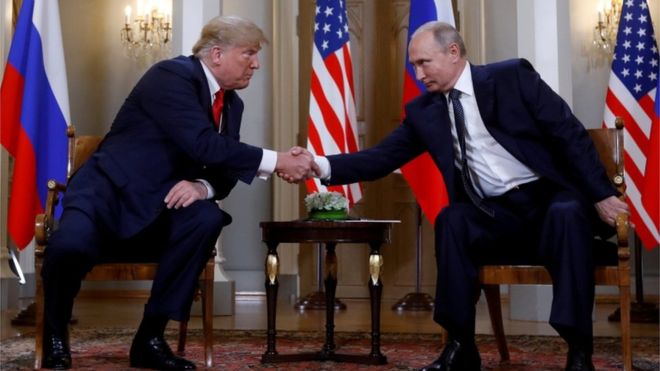 The White House on Friday said Donald Trump was open to the idea of visiting Moscow after Vladimir Putin revealed he had invited the US president and was also ready to travel to Washington for a delayed summit next year.

After a summit in Helsinki between the two leaders last week sparked a political crisis in the US, Putin said they had planned to meet on the sidelines of yet another summit in Argentina later this year and possibly at other venues.

And speaking in Johannesburg on Friday, Putin told reporters "I am ready to go to Washington", adding that he had also invited Trump to visit Moscow.

"(Trump) has a desire to conduct meetings in the future and I am ready," Putin said following a summit of the leaders of the BRICS group -- Brazil, Russia, India, China and South Africa.

He stressed, however, that conditions should be in place for such events to go ahead.

The White House responded with a statement saying "President Trump looks forward to having President Putin to Washington after the first of the year, and he is open to visiting Moscow upon receiving a formal invitation."

The Kremlin chief spoke after the US administration earlier this week delayed a second summit between Putin and Trump to next year under fire from critics at home and was visibly at pains to demonstrate he had taken no offence.

He said he understood the US leader's position, adding they planned to meet on the sidelines of a G-20 meeting in Buenos Aires starting late November.

Trump and Putin could also meet at other international events, the Russian leader said without naming them.

He said the two leaders needed to see each other face-to-face to discuss a host of bilateral and international issues like Syria, Iran and nuclear arms control.

He said talks should begin on the possible extension of a nuclear arms treaty which was signed by Trump and Putin's predecessors, Barack Obama and Dmitry Medvedev in 2010 and which will expire in 2021.

"Are we going to extend it or not?" he asked.

"Contacts at the highest political level are needed," Putin said. "You cannot discuss everything by phone."

The summit between the US and Russian leaders in the Finnish capital this month unleashed political turmoil in Washington, with some critics accusing the US president of betraying America's interests.

Trump faced particularly intense criticism after the news conference, during which he appeared to support Putin's "extremely strong and powerful" denial of subverting the 2016 US presidential election.

In South Africa, Putin also said "political disputes" were damaging the dollar as a reserve currency, speaking shortly after Moscow exited the list of the biggest foreign holders of US government debt.

"With regard to our American partners and the restrictions they have put in place, especially with regard to dollar payments, it is a big strategic mistake, because it undermines confidence in the dollar," he said.

US Treasury Department data released this month showed Moscow held $14.9 billion worth of Treasury notes in May, well below the $48.7 billion held by Russia in April.

Putin said Russia was not abandoning the dollar altogether but "must minimise risks."

The heads of the BRICS group met in Johannesburg for an annual summit dominated by the risk of a US-led trade war, although leaders did not publicly mention Trump by name.