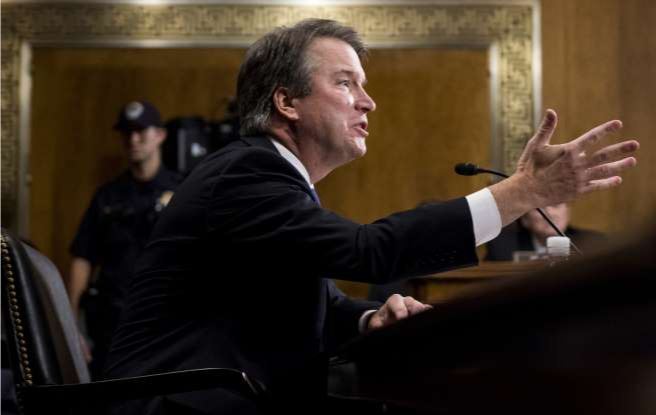 Judge Brett Kavanaugh testifies during the Senate Judiciary Committee hearing on his nomination to be an associate justice of the US Supreme Court. (Photo: Tom Williams/Getty Images)

US President Donald Trump on Friday ordered a probe by the Federal Bureau of Investigation (FBI) into sexual assault allegations against his Supreme Court nominee Brett Kavanaugh.

"I've ordered the FBI to conduct a supplemental investigation to update Judge Kavanaugh's file. As the Senate has requested, this update must be limited in scope and completed in less than one week," Trump said in a statement released by the White House, Xinhua reported.

In a separate statement simultaneously released by the White House, Kavanaugh said he will continue to cooperate with further investigation.

Currently, three women have come forward to accuse Kavanaugh of sexual harassment or assault during his high school and college years.

Republican Sen. Lindsey Graham says it's going to fall to him to lay out to US President Donald Trump why Brett Kavanaugh's Supreme Court confirmation vote has been delayed.

He spoke after Arizona Sen. Jeff Flake said he would vote to advance Kavanaugh's nomination to the full Senate only if the final confirmation vote is delayed for an FBI investigation into sexual assault allegations.

Christine Blasey Ford says Kavanaugh attacked her in a locked room at a high school house party. Kavanaugh denies that.

The Senate Judiciary Committee voted Friday to advance the nomination to the full Senate, but Senate Judiciary Chairman Chuck Grassley noted the timing on Senate vote was up to Senate Majority Leader Mitch McConnell.

Graham, of South Carolina, is a Trump ally who is on the panel. Graham told reporters after the committee vote that somebody is going to have to explain the delay to Trump. Graham added: "I guess that'll be my job."

President Donald Trump says he'll leave it to the Senate to determine when it will vote on his Supreme Court nominee Brett Kavanaugh. But Trump is expressing optimism, saying: "I'm sure it will all be very good."

Trump told reporters Friday during a meeting with the President of Chile that undecided Republican senators "have to do what they think is right" and "be comfortable with themselves" on the Kavanaugh vote.

But he said he hadn't thought at all about a replacement, "Not even a little bit."

But Sen. Jeff Flake of Arizona said at the last minute that he could not promise to vote for Kavanaugh on the Senate floor and called for a delay of up to a week for a further investigation of sexual assault accusations.

Kavanaugh has denied the allegations.

Sen Jeff Flake says Brett Kavanaugh's Supreme Court nomination should on hold so the FBI can investigate the sexual misconduct allegations against him.

Flake, the deciding vote in the Senate Judiciary Committee, voted to advance Kavanaugh's nomination to a full floor vote, but said the vote should be delayed for up to a week to allow time for the investigation of Christine Blasey Ford's claims.

Ford says Kavanaugh sexually assaulted her while the two were in high school.

The Senate Judiciary Committee has voted along party lines to advance Brett Kavanaugh's Supreme Court nomination to the Senate floor.

The 11-10 vote Friday came just one day after Republicans heard testimony from Christine Blasey Ford, who accused Kavanaugh of sexually assaulting her when they were teens. Kavanaugh denied the accusation.

At the last minute, Sen. Jeff Flake of Arizona, said he could not promise to vote for Kavanaugh on the Senate floor and called for a delay of up to a week for a further investigation.

Republicans voted to move ahead with Kavanaugh's nomination.