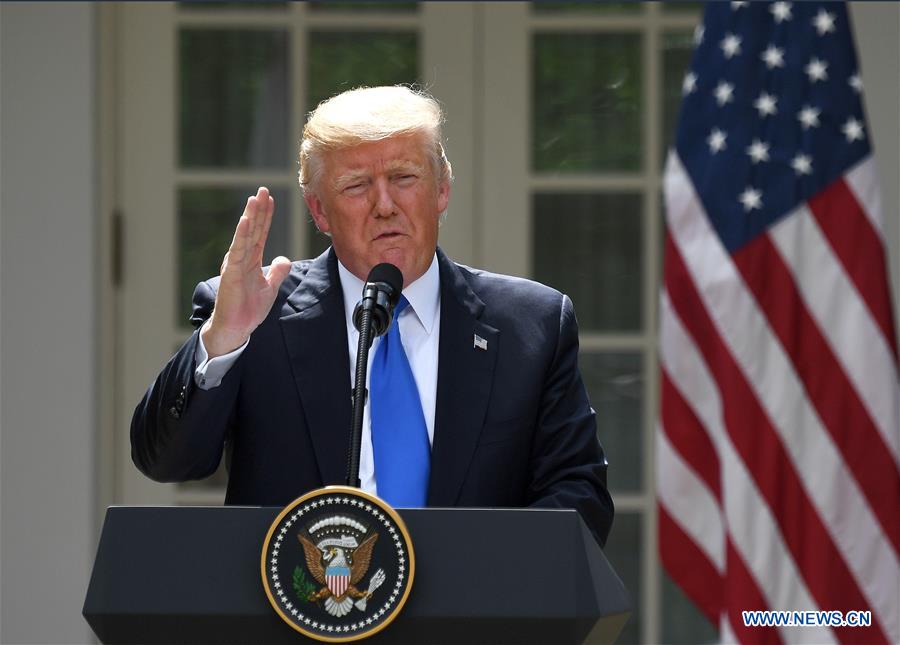 WASHINGTON, Jan. 12 (Xinhua) -- U.S. President Donald Trump, who was impeached by the Democrat-led House for abuse of power and obstruction of Congress last month, traded barbs with Speaker Nancy Pelosi on Sunday over the impeachment.

Trump, in a series of tweets, denied any wrongdoings, touted the GOP unity in the impeachment votes, and lashed out at Pelosi and other Democrats.

"This phony Impeachment Hoax should not even be allowed to proceed. Did NOTHING wrong. Just a partisan vote. Zero Republicans. Never happened before!" Trump wrote.

The House's top Democrat Pelosi has been holding onto the articles of impeachment, forcing a trial in the Senate to delay, in hopes that Republicans would agree to allowing certain witnesses to provide testimony.

However, Senate Majority Leader Mitch McConnell, who has said he wants to the trial begin first before dealing with potential witnesses, has garnered enough votes to move forward with it without a need to respond to Democrats' proposals.

Pelosi, who has announced a plan releasing the articles of impeachment to the Senate, defended her tactic in an interview with ABC News on Sunday.

"We feel that it has produced a very positive result," Pelosi said. "We wanted the public to see the need for witnesses."

The California Democrat also warned the Senate, where Republicans have a narrow majority, against dismissing the impeachment case.

"The president is impeached for life, regardless of any gamesmanship on the part of Mitch McConnell," she said. "There is nothing the Senate can do to ever erase that."

In an anonymous complaint last summer, a whistleblower raised concerns about the White House's interactions with Ukraine, triggering a Democrat-led impeachment inquiry against Trump.

The president was alleged to have pressed his Ukrainian counterpart, Volodymyr Zelensky, into launching investigations that could politically benefit him. Furthermore, the White House allegedly tried to cover it up.

The timeline for the Senate trial mostly depends on the House's actions next week.

Senators could be sworn in as soon as Thursday for the impeachment trial, according to CNN, citing Senate aides.

But the trial, with arguments on the floor, probably won't begin until days after that.