US President Donald Trump on Thursday rebooted his flagging reelection campaign with a speech starkly rejecting nationwide protesters' claims of police racism, saying only a "few bad apples" are to blame. 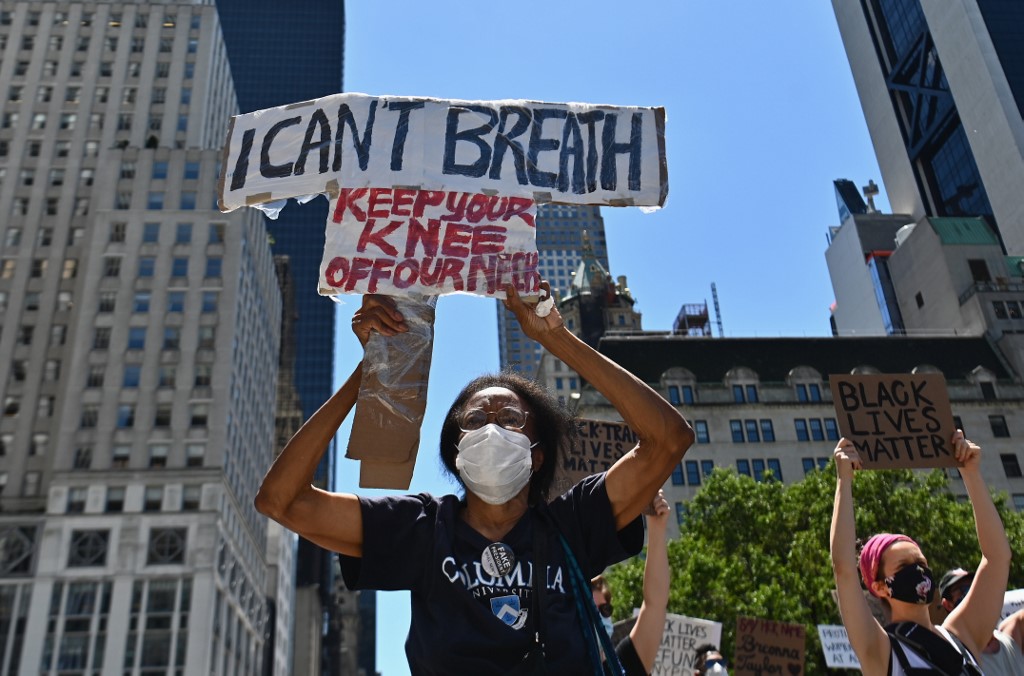 Demonstrators protest against police brutality and racial inequality in the aftermath over the death of George Floyd on 5th Avenue at Trump Tower on June 12, 2020 in New York City. (Photo: AFP)

Far from reaching out to demonstrators' searing anger, he offered only a vague proposal to "encourage" officers to meet "the most current professional standards for the use of force."

"You always have a bad apple, no matter where you go," said Trump, who is making law and order a new keystone of his bid to win a second term on November 3. "There aren't too many of them in the police department."

"We have to work together to confront bigotry and prejudice wherever they appear, but we will make no progress and heal no wounds by falsely labeling tens of millions of decent Americans as racist or bigots," Trump said.

The Republican has struggled to find the right tone to address the explosion of protests over the last two weeks in the wake of the death of an unarmed African-American man, George Floyd, as he was arrested in Minneapolis.

That crisis, coupled with the economic devastation of the COVID-19 shutdown -- and the fact that the pandemic continues to kill up to 1,000 people a day -- has left the country crying out for healing.

Trump, whose political style is built largely on fierce division and exciting his right-wing base, faced pressure to encourage unity in Dallas.

He did explore some of the deeper causes of racial disparities in the world's richest country, saying that more would be put into healthcare and the ability to raise business capital in minority communities.

Later, in an interview with the generally friendly Fox News network, he described the "horror" of watching Floyd's death on cellphone footage shot by a witness.

But critics say he is incapable of embracing broader public fears, pointing to the contrast between shows of empathy from previous presidents during crises and Trump's instinct for fighting and insulting foes, even in the midst of calamity.

"Today's trip to Texas won't change any of that. President Trump is more interested in photo ops than offering a healing voice as our nation mourns."

Despite his poll numbers being underwater five months ahead of election day, Trump is betting that he needn't change tack.

His base has remained loyal throughout the extraordinary turmoil, and he has made clear his priority is getting back on the campaign trail.

Immediately after his remarks in Dallas, the president heads to his first campaign fundraiser since the COVID-19 lockdown began -- a $580,600 per couple event. Then he flies to his golf course resort in New Jersey for the weekend, another post-COVID first.

On June 19 he will restart his mothballed series of rallies -- raucous, often two-hour love fests between Trump the entertainer-in-chief and thousands of his most loyal supporters -- with an event in Oklahoma.

Some Americans may want calm after months of rancor, but that's one thing the former reality TV star is not giving.

Even the choice of Tulsa, Oklahoma, for his resumption of rallies generated controversy.

June 19 is known as "Juneteenth," the day marking the end of slavery in the United States. Tulsa, however, is notorious as the site of a 1921 massacre of African-Americans.

As he left for Dallas, Trump lambasted Democratic leaders of Washington state, where he said "domestic terrorists" had taken over Seattle, referring to protesters.

He also doubled down on his latest culture wars battle, insisting again he will refuse demands to change the names of US military bases honoring leaders of the slave-owning, rebel South during the Civil War.

Back in Washington, there were new tensions between the White House and the military when the chairman of the joint chiefs of staff, General Mark Milley, apologized for appearing alongside Trump during a controversial walk to a church on June 1, minutes after police violently dispersed protesters.

"I should not have been there," Milley said in his unexpected comments.

The choice of Texas for Thursday's trip was notable because the state -- Republican for decades -- is turning in to a battleground.

Trump won narrowly in 2016 and a Quinnipiac poll last week put him only one percentage point ahead of Biden.

In 2016, polls and politics watchers in general got it wrong about Trump, who ran a chaotic campaign against the ultra-professional Hillary Clinton yet still scored a famous electoral college win.

This has left many election watchers gun-shy. Even so, current polls make grim reading for the Republican.

The FiveThirtyEight average shows Trump's approval rating at just 41 percent, having taken a big hit from his handling of the COVID-19 and racism crises.

The RealClearPolitics average for a presidential election match-up puts Biden at 49.8 to Trump's 41.7.

Worse for Trump -- given his hope of repeating his electoral college win, even if losing the overall popular vote -- Biden leads in almost every swing state.