Trump pressed to levy harsh US response to Khashoggi killing

Trump says that Saudi Arabia is a "spectacular ally" and that he's not convinced that Crown Prince Mohammed bin Salman, the kingdom's de facto leader, was directly responsible for the Oct. 2 slaying of the editorial columnist for The Washington Post inside the Saudi consulate in Istanbul. 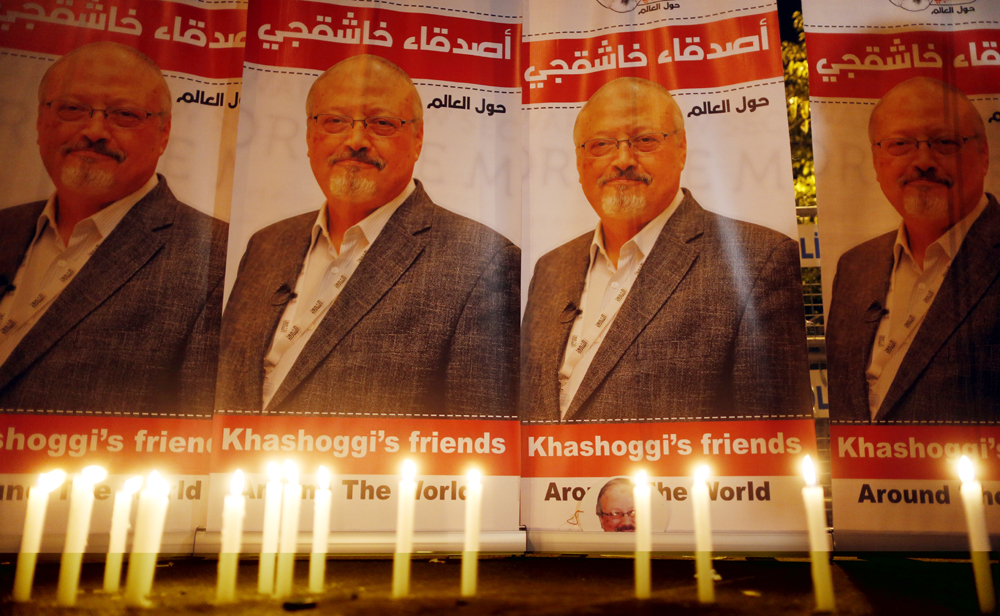 But there are increasing calls for more action amid a growing consensus that the crown prince, who controls virtually all major levers of power in Saudi Arabia, must have known about the operation.

The pressure is coming from both Democrats and Republicans in Congress and US allies abroad.

France's top diplomat said Monday that his country was mulling sanctions against Saudi Arabia. Germany on Monday announced that it has banned 18 Saudi nationals from entering Europe's border-free Schengen zone because of their suspected connections to the killing. German officials, who earlier banned new weapons exports to Riyadh, also said they are halting previously approved arms exports as well.

Over the weekend, Trump called reports that the crown prince ordered the killing "premature." He said that it was "possible" and that it was also possible that people will never know the truth.

"Donald Trump just says, 'Will anybody really know?' as if our intelligence agencies are incapable of making an assessment," Sen. Ron Wyden, D-Ore., said Monday.

He said CIA Director Gina Haspel and National Intelligence Director Dan Coats need to "come out and provide the American people and the Congress with a public assessment of who ordered the killing of Jamal Khashoggi."

Saudi Arabia's top diplomat insists that the crown prince had "absolutely" nothing to do with Khashoggi's death, but US intelligence officials have concluded that he ordered the killing, according to a US official familiar with the assessment. Others familiar with the case caution that while it's likely that the crown prince had a role in the death, there continue to be questions about the degree to which he was involved.

Vice President Mike Pence told reporters that Trump on Tuesday would review information about Khashoggi's death and then make his decisions about the United States' "enormously important strategic relationship" with Saudi Arabia, which is aligned with the United States in pushing back against Iran.

The United States has stepped up its opposition to Saudi Arabia's war against Houthi rebels in neighboring Yemen. Saudi airstrikes in the war in Yemen have killed thousands of civilians.

In recent weeks, Secretary of State Mike Pompeo and Defense Secretary Jim Mattis have called for a ceasefire in Yemen, and the US has announced it would stop refueling Saudi Arabian aircraft fighting the Houthis. The US also has sanctioned 17 Saudi officials suspected of being responsible for or complicit in the killing.

Sen. Rand Paul, R-Ky., says sanctioning people who are already imprisoned — including some facing the death penalty in connection with the killing — will have little effect. Paul said the president should cut off arms sales to the kingdom — an action that Trump has repeatedly said he did not want to take.

Late last week, a bipartisan group of senators introduced legislation that calls for suspending weapons sales to Saudi Arabia; sanctions on people who block humanitarian access in Yemen or support the Houthi rebels; and mandatory sanctions on those responsible for Khashoggi's death.

"There must be a transparent, credible investigation into Khashoggi's murder," New Jersey Sen. Bob Menendez, the ranking Democrat on the Senate Foreign Relations Committee, said in introducing the bill with two Democratic and three Republican colleagues.

"On Yemen, the administration's recent decision to suspend US aerial refueling for the Saudi coalition absent an actual strategy for ending this conflict is empty action," he said.

Some foreign policy experts advocate for a complete reset on relations with Riyadh.

Emile Nakhleh, a former member of CIA's senior intelligence service, said that since the crown prince assumed power three years ago, he has turned his country into a "strongman autocracy" that can't be trusted.

"His ruthless power grab, repression of potential challengers within his family, and crackdown on all opposition to his policies and projects inside and outside of Saudi Arabia have put American-Saudi relations at risk," Nakhleh wrote in an op-ed Monday in the online intelligence newsletter The Cipher Brief. "He feels empowered to crush his potential rivals within the ruling family by his close relationship to President Trump and Jared Kushner."

Kushner, the president's son-in-law, has worked with the crown prince on various issues, including on how to end the conflict between Israel and the Palestinians.