US President Donald Trump said he has yet to read a UN report warning of global warming-caused chaos unless drastic action is taken and added that he is skeptical.

A protestor wearing a blindfold with Climate Chaos written on it stands during a cilmate change demonstration on 19 August 2007. (Photo: AFP)

The landmark report released Monday said that time is running out to avert climate-induced disaster. The Intergovernmental Panel for Climate Change (IPCC) declared it had "high confidence" in its predictions.

At the White House, Trump said he has not read it yet.

"But I will be reading it, absolutely."

It was Trump's first reaction to the report, which says that the Earth surface has warmed one degree Celsius (1.8 degrees Fahrenheit) and is on track toward an unliveable 3C or 4C rise.

The Trump administration has dismantled emissions reduction policies domestically, and vowed to ditch the Paris treaty on attempting to reduce greenhouse gas emissions worldwide. However, Washington did not obstruct the report, as some had expected. 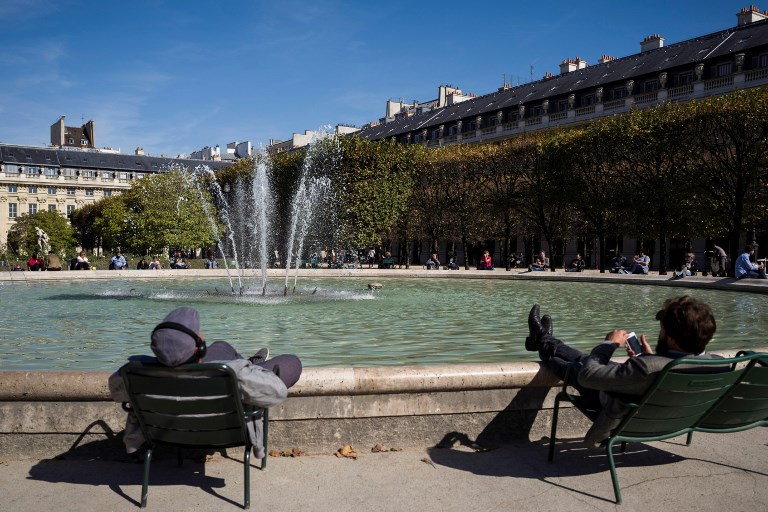 People enjoy a sunny day in the garden of the Palais Royal in Paris on October 8, 2018. Avoiding global climate chaos will require a major transformation of society and the world economy that is "unprecedented in scale" the UN said on October 8, 2018, in a landmark report that warns time is running out to avert disaster. (Photo: AFP)

Many in Trump's Republican party are self-described climate change skeptics, questioning whether the overwhelming consensus of scientists around the world about manmade causes for ever-rising temperatures is accurate.