WORLD Trump rails against delay in moving impeachment to Senate

Trump rails against delay in moving impeachment to Senate 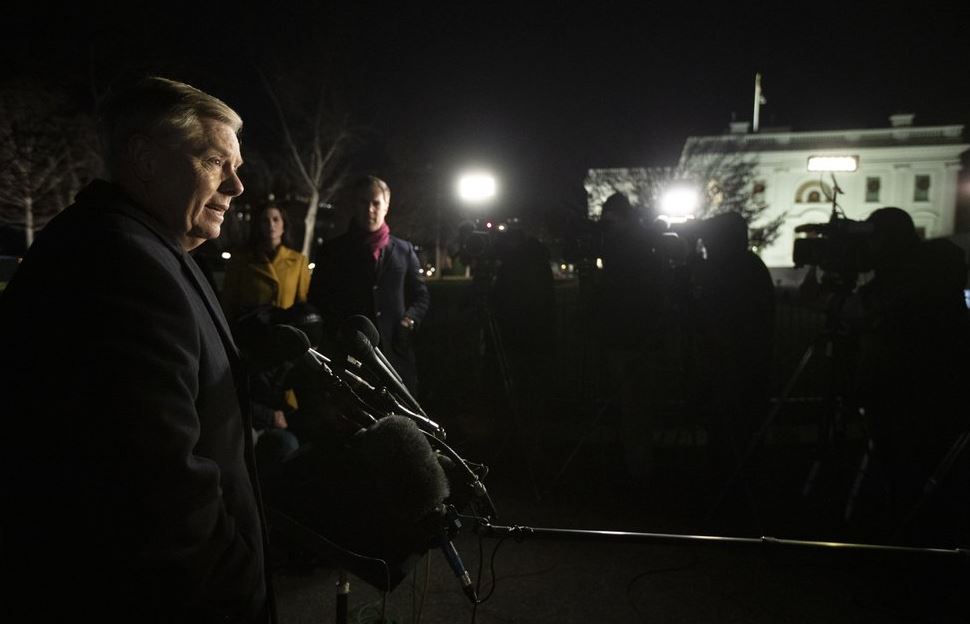 Sen. Lindsey Graham, R-SC, speaks to reporters outside the West Wing on the North Lawn of the White House, Thursday, Dec. 19, 2019, in Washington. (Photo: AP)

Sen. Lindsey Graham, a staunch Trump GOP ally, emerged from a White House meeting with the president with a message.

“He is demanding his day in court,” Graham said in an interview on Fox News Channel Thursday evening. “I just left President Trump. He’s mad as hell that they would do this to him and now deny him his day in court.” The White House did not immediately respond to questions about his account.

Trump has seen a Senate trial as his means for vindication, viewing acquittal as a partial antidote to impeachment’s stain on his legacy. But that effort has been threatened by Pelosi’s decision to delay sending the articles approved by the House Wednesday to the Senate until, she says, Republican leaders offer more details about how they will handle an expected trial.

“So far we haven’t seen anything that looks fair to us,” she said late Wednesday, dropping a surprise procedural bombshell just after the House cast its historic votes making Trump only the third president in the nation’s history to be impeached. House Democrats had argued for weeks that Trump’s impeachment was needed “urgently” to protect the nation.

Democrats do not have enough votes in the GOP-controlled Senate to convict Trump and remove him from office, but have been pushing for a trial to include witnesses who declined to appear during House committee hearings, including acting White House Chief of Staff Mick Mulvaney and former national security adviser John Bolton.

Trump, meanwhile, has been hoping the trial will serve as an opportunity for vindication, and continues to talk about parading his own witness list, including former Vice President and 2020 Democratic candidate Joe Biden, even though there is little appetite for that among Senate leaders.

One White House official mused that Pelosi’s decision to indefinitely delay the trial would be an even more effective talking point for the president than his expected acquittal because, they argued, it would highlight how Pelosi has manipulated the process to deny Trump the opportunity to defend himself and clear his name.

Such messaging has been effective in driving outrage among the president’s core supporters, which Trump’s campaign hopes will help propel him to reelection next year.

But Graham made clear the president has not been swayed by that argument, calling the delay a “constitutional outrage” and insisting everyone should have their day in court.

Trump had told reporters in the Oval Office earlier Thursday that Democrats were “playing games,” claiming they didn’t want to submit the charges “because they’re ashamed of ’em” and adding, falsely, that “they’re not allowed to do that. I hear it’s unconstitutional and a lot of other things.”

There is no constitutional requirement for the Democrats to transmit the articles swiftly, or at all.

Meanwhile, Trump insisted Thursday that he has not been bothered by the whole impeachment episode, despite all evidence to the contrary.

Asked how he felt about going down in history as only the third president to be impeached, Trump quipped, “To me it doesn’t feel like impeachment.”

Pelosi’s unexpected procedural delay also got a sour response from Senate Majority Leader Mitch McConnell, who described the delay as a “very unusual spectacle,” given the urgency Democrats had previously expressed.

“The prosecutors appear to have developed cold feet,” he said Thursday on the Senate floor.

“I admit, I’m not sure what leverage there is in refraining from sending us something we do not want,” he added. “Meanwhile, other House Democrats seem to be suggesting they’d prefer never to transmit the articles. Fine with me.”