WASHINGTON, Nov. 26 (Xinhua) -- US President Donald Trump traveled to state of Mississippi on Monday to rally support for GOP Senate candidate Cindy Hyde-Smith ahead of her runoff election against Democratic opponent Mike Espy. 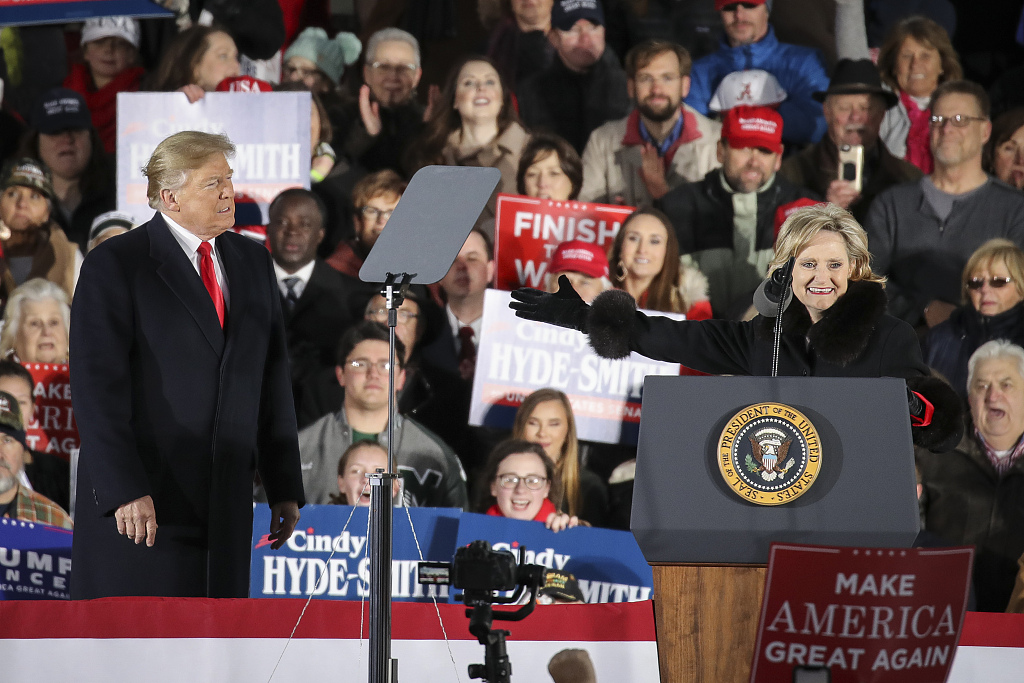 President Donald Trump looks on as Republican candidate for US Senate Cindy Hyde-Smith thanks him during a rally at the Tupelo Regional Airport, November 26, 2018 in Tupelo, Mississippi, US. (Photo: VCG)

"Cindy is so important, so respected," Trump told a rally in Tupelo, one of the stops he was expected to make for Hyde-Smith, whom the Mississippi governor appointed earlier this year to temporarily fill the US Senate seat being vacated due to the resignation of Thad Cochran.

Hyde-Smith is the first woman to represent Mississippi in US Congress.

Trump predicted a big day on Tuesday for Hyde-Smith and the Republican Party, noting that the Mississippi election is about "judges, jobs, borders and protecting opportunities" for children.

"Don't take any chances" by not voting, the president said.

Hyde-Smith told the crowd that she'll continue to stand up for the conservative values of the state if they back her in Tuesday's election.

She said a vote for her is a vote for less government and less regulation.

Espy was holding a rally at a predominantly African-American church in Jackson, Mississippi's capital, on Monday night.

A former congressman, Espy could be the first African American man elected to the US Senate in the state since Reconstruction,

If Hyde-Smith wins Tuesday's runoff, Republicans would have a majority of 53-47 over Democrats in the Senate.

During the Nov. 6 election, neither Hyde-Smith nor Espy received the requisite 50 percent of the vote, forcing a runoff between them in the deep-red state.

The winner of the runoff will finish the final two years of a term started by Cochran.

The Mississippi election will also conclude the 2018 midterm elections, during which Republicans consolidated their majority in the Senate, while Democrats flipped nearly 40 seats to recapture the control of the House.