WORLD Trump reports progress, but not enough, in tariff talks with Mexico

President Donald Trump said some progress -- but not enough -- was made Wednesday in talks with Mexico on averting the tariffs he threatens to impose unless the southern neighbor stems the flow of undocumented migrants into the US. 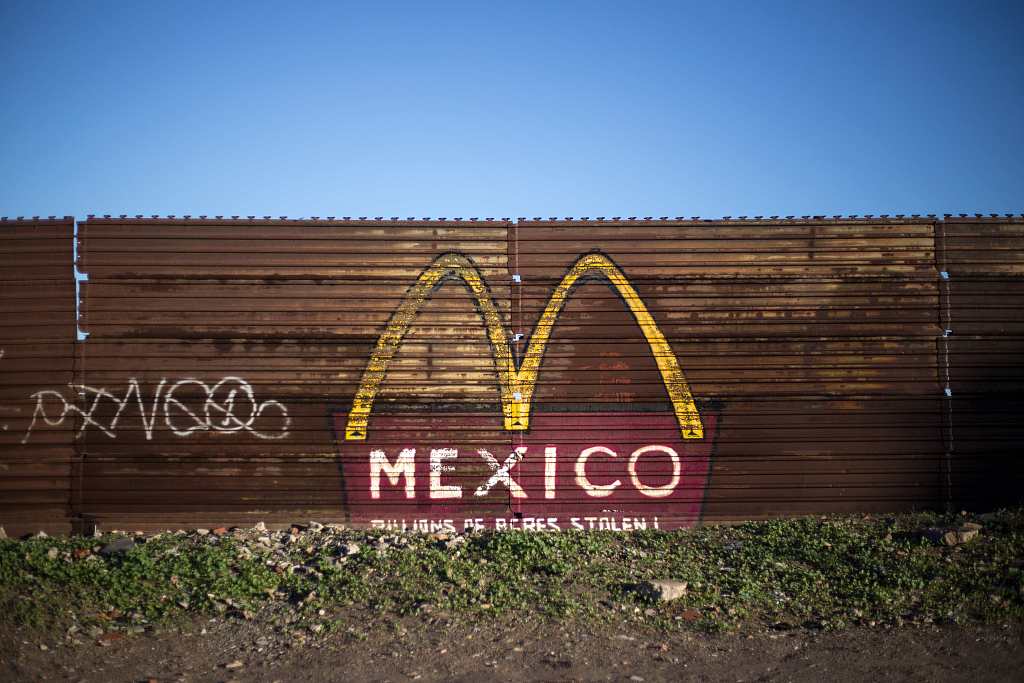 View of the border fence between Mexico and US taken from Mexico's side on January 25, 2017, in Tijuana, northwestern Mexico. (File photo: VCG)

Trump's evening tweet said discussions will resume Thursday, and came as new data showed migrant detentions at the southern US border have hit their highest level since 2006.

Ahead of the high-stakes negotiations Wednesday, the Trump administration laid out tough demands for Mexico City to crack down on hundreds of thousands of Central American migrants traversing the country to the US Mexican border in recent months.

Trump, tweeting from Europe, said "Progress is being made, but not nearly enough!"

He said that more talks will be held Thursday "with the understanding" that if no deal is reached, the tariffs he announced last week will go into effect Monday as planned.

That means they will start at five percent, hit all Mexican imports, and rise incrementally to 25 percent in October.

Fitch downgraded Mexico's credit rating Wednesday, saying its economy faced greater risk because of the threatened duties. Another ratings agency, Moody's, changed its outlook for Mexico from stable to negative.

Ahead of Wednesday's meeting, senior White House economic advisor Peter Navarro said Mexico would have to agree to lock down its own southern border and process migrant asylum claims inside Mexico.

Mexico recognizes that the situation on the border is untenable, Foreign Minister Marcelo Ebrard told a news conference after Wednesday's negotiating session.

"Why? Because we saw the reports of the numbers and indeed, the flows are growing too much."

Ebrard, who leads the Mexican delegation which urgently travelled to Washington, earlier this week drew the line on so-called "safe third-country" asylum, signaling the discussions would be tough.

Speaking from Ireland ahead of the talks, however, Trump said he believed Mexico is ready to "make a deal."

Migrants surge 32% in May

The talks opened as the US Customs and Border Protection agency reported that more than 144,000 migrants were detained or blocked from crossing into the United States from Mexico in May, a 32 percent surge from April and nearly triple the level of a year ago.

Most were families from Guatemala, Honduras and El Salvador. The total included almost 58,000 children, most hoping to escape chronic poverty and violence and get a foothold inside the United States.

Increasingly the migrants were arriving in large groups, including one of 1,036 individuals detained in El Paso, Texas on May 29.

US holding and processing facilities were full, and agencies involved were running out of funding.

The Office of Refugee Resettlement, which takes care of the thousands of unaccompanied children that cross the border each month, said Wednesday that it has had to cut back secondary services it provides them, including legal aid, education, and recreation.

"We are in a full-blown emergency. The system is broken," Sanders said.

Ebrard was hoping to convince the White House to hold off on the tariffs.

The US administration has not said what degree of reduction in migration will satisfy it.

Mexico has deployed its new National Guard police force to its southern border and stepped up migrant detentions and deportations.

But the flow has continued: a caravan of around 1,200 Central American migrants entered southern Mexico from Guatemala on Wednesday, bound for the United States, police said.

Navarro said than in addition to Mexico's accepting asylum claims -- rather than their being lodged in the United States -- Mexico could avoid the tariffs by locking down its own border with Guatemala.

Thirdly, he said, Mexican officials manning checkpoints on the roads that migrants take through Mexico must stop taking bribes and permitting the migrants to continue on their northward journey toward the United States.

"Those checkpoints are designed to stop the flood, but instead, it's the corruption, the government officials that make money from this human trafficking, that has to stop," he said.

The Trump administration was under growing pressure from inside the country to drop the threat of tariffs. Republican legislators warned that curtailed trade would damage many US businesses which rely on goods and components made in Mexico.

Seven former US ambassadors to Mexico City said in an open letter published by CNBC that Mexico had made real efforts to slow the migrants, and that tariffs would be counter-productive.

"Damaging Mexico's economy will cripple its capacity to tackle migrant flows as well as the economic growth that contributed to 'net zero' Mexican migration to the US today," they said.

"Mexico would face a political imperative to retaliate against US exports."