During a meeting with Paraguayan President Mario Abdo Benitez at the White House, Trump answered questions about the impeachment vote, saying he did nothing wrong.

The House Judiciary Committee approved two articles of impeachment against him.They charge Trump with abuse of power related to his dealings with Ukraine and obstruction of Congress.

Both articles were approved by committee members along party lines, 23 Democrats to 17 Republicans.

The charges now go to the full House of Representatives, where a vote is expected next week.

Here is a full breakdown of the impeachment process: 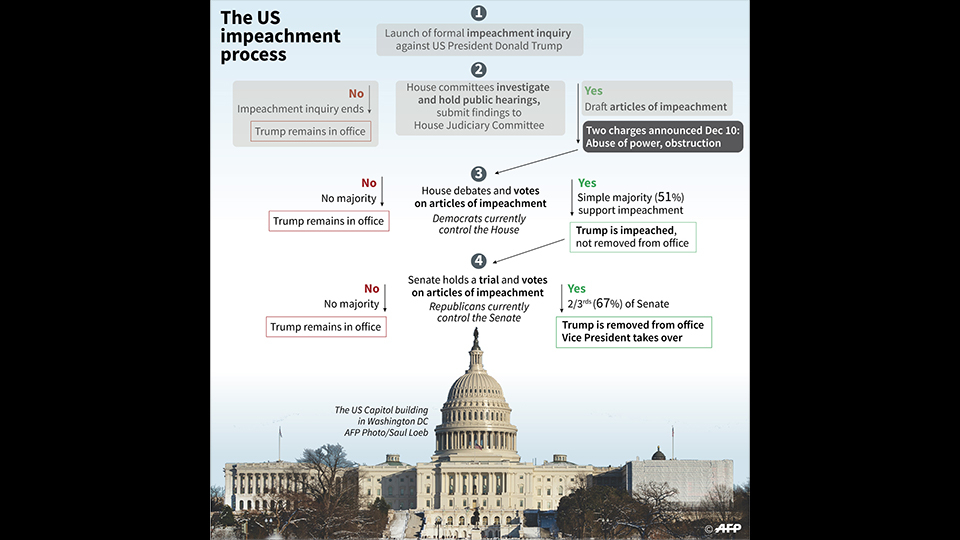 But what does this all mean?

The U.S. House of Representatives has 435 members. If at least 218 of those members vote in favor of impeachment, a simple majority, the president is impeached and the issue moves to the Senate.

With a Democratic majority in the House, impeachment is expected to pass.

The U.S. has 100 senators, and a two-thirds majority vote is required to convict and remove a president from office. With Republicans holding a majority in the Senate and none saying they plan to vote against Trump, his removal appears unlikely.

If Trump were removed, however, Vice President Mike Pence would take his place and finish the presidential term, which ends on January 20, 2021.