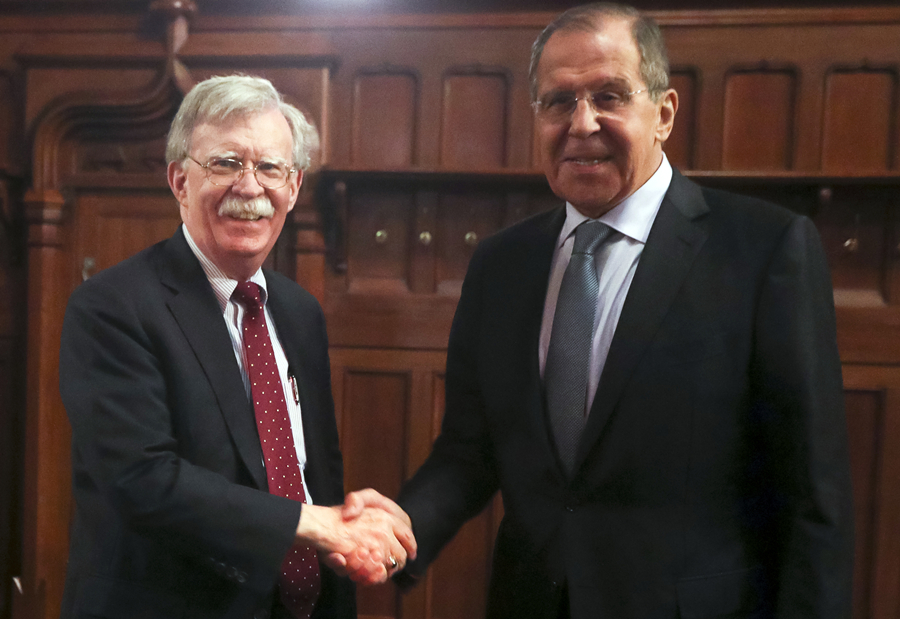 John Bolton landed in Moscow on Monday less than 48 hours after Trump said that Russia violated the Intermediate-Range Nuclear Forces Treaty and warned that the US would begin developing such weapons unless Russia agree not to possess or develop them.

The pact that was signed in 1987 by US President Ronald Reagan and Soviet leader Mikhail Gorbachev that prohibits the US and Russia from possessing, producing or test-flying ground-launched nuclear cruise and ballistic missiles with a range of 500 to 5,500 kilometers (300 to 3,400 miles.)

Russian Defense Minister Sergei Shoigu on Tuesday lauded Bolton for his two-day visit and said that "even small steps will benefit our relations and help restore trust" between the two countries. He also said that Russia and the US should build up on their cooperation in Syria which helped to prevent major incidents in the sky or on the ground.

But Dmitry Peskov, spokesman for Russian President Vladimir Putin, told reporters that right now "there are no prospects for a new deal" to replace the INF treaty and that this is a "dangerous position" to give it up without an alternative in sight.

Bolton, who met with Security Council chairman Nikolai Patrushev on Monday, is expected to meet Putin later on Tuesday.

He told Shoigu that he was in Moscow to work on Trump's commitment to improve security cooperation with Russia.

"We certainly share your view that the US-Russian discussions with respect to Syria have been useful, productive and professional, and we hope we can extend those conversations through a number of other ways that you mentioned, and even more," he said. 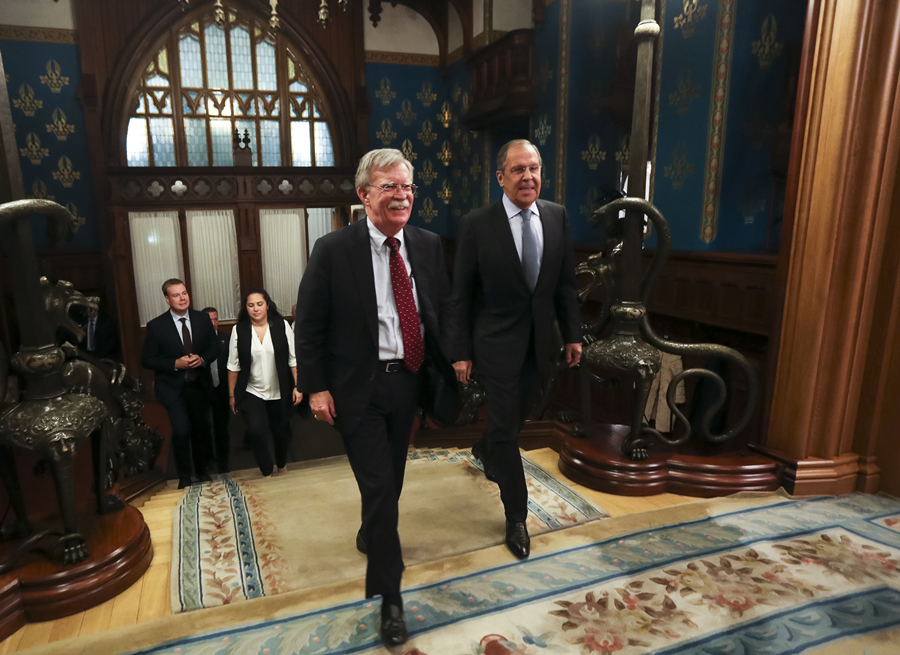 In televised comments, neither Bolton nor Shoigu mentioned Trump's announcement on the INF treaty.

In an interview with the Ekho Moskvy Russian radio station on Monday, Bolton made it clear that Washington has made up its mind about leaving the treaty.

"If Russia says it's not violating the INF treaty, what are they going to do to change their behavior to comply?" he said.

When signed in 1987, the treaty was lauded as a major safeguard for global security since with no shorter-range missiles in use, the nuclear superpowers would in theory have more time for decision-making if faced with a nuclear attack.

The European Union warned Trump of a potential impact on European security if he decided to go ahead and leave the INF treaty.

An EU statement on Monday described the pact as an essential cornerstone of Europe's security structure, adding, "the world doesn't need a new arms race that would benefit no one and on the contrary, would bring even more instability."

Separately, Bolton told Ekho Moskvy that he raised the issue of Russian meddling in the US elections in talks with Patrushev on Monday. He said that he did not believe the meddling had any effect in the US 2016 election, though the accusations created "enormous distrust of Russia."