The United States marked an unusually somber Independence Day on Saturday, with President Donald Trump bashing domestic opponents -- but praising the country's coronavirus response, despite a record surge in cases. 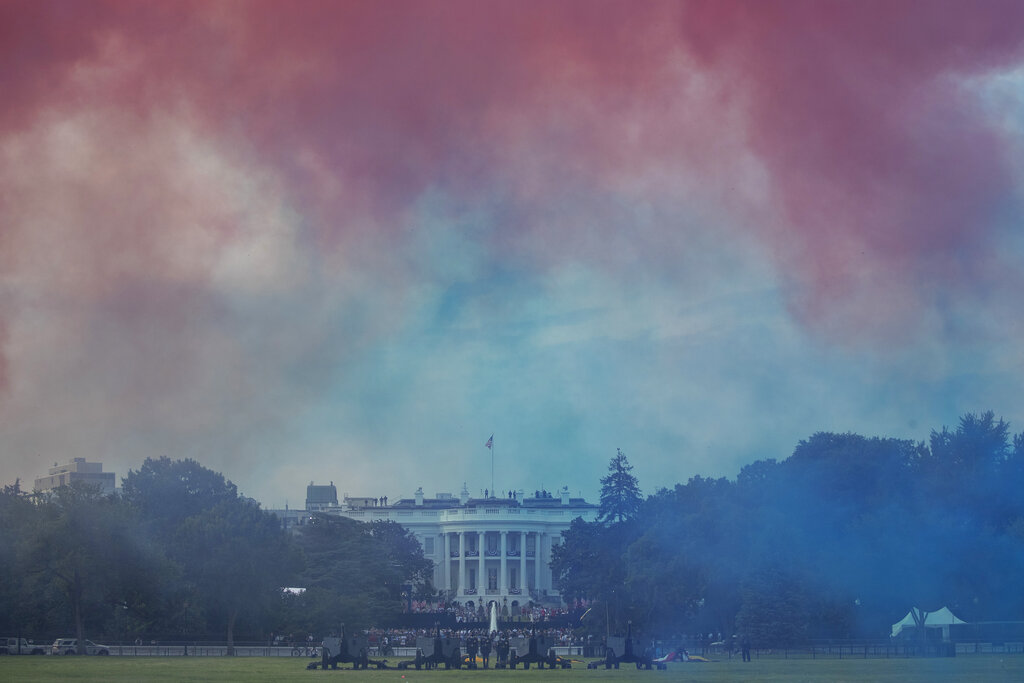 The White House in obscured by Red and Blue smoke floating on the Ellipse during a "Salute to America" event on the South Lawn of the White House, Saturday, July 4, 2020, in Washington. (Photo: AP)

Across the country, virus fears dampened or nixed Main Street parades, backyard barbecues and family reunions on a day when Americans typically celebrate their 1776 declaration of independence from Britain.

Instead of adopting a unifying tone, Trump -- facing a tough re-election and eager to mobilize his political base -- railed against protesters demanding racial justice after unarmed African American George Floyd was killed by a white police officer.

Anti-racism protesters who have marched in cities across America are "not interested in justice or healing. Their goal is demolition," he said.

He accused China -- where the outbreak originated -- of a cover-up that allowed the illness to race across the globe, but hailed American "scientific brilliance."

"We'll likely have a therapeutic and or vaccine solution long before the end of the year," he said.

Some of the US leader's sharpest words were for the media, which he accused of a campaign to smear opponents as racists.

Trump's divisive address came as popular beaches on both coasts -- normally packed on July 4th -- were closed as California and Florida suffer alarming surges in COVID-19 infections. Los Angeles Mayor Eric Garcetti warned citizens to "assume everyone around you is infectious."

Florida on Saturday marked a new daily high in confirmed virus cases at 11,458 -- far more than any other state. Miami Beach imposed a curfew and made mask-wearing mandatory in public, yet some Florida beaches remained open.

The beach at New York's Coney Island was also open and crowded, with few wearing masks.

Mark Ruiz came with his wife and two children, despite being "definitely worried" about the virus.

"I just can't stay home on the Fourth of July, I got to take my kids out," he told AFP. "We can't be in a bubble all summer."

Health officials have been bracing for a new spike in virus cases after this weekend, which they see as a potential tipping point for more infections.

The US virus death toll is fast approaching 130,000, roughly one-quarter the world's total.

Fireworks displays are typically a high point of the holiday, but an estimated 80 percent of the events have been canceled this year.

Washington was hosting a fireworks show on the National Mall, and some said they were compelled to come at a moment when the US is both grappling with the virus and undergoing a historic reckoning on racism.

"It's time for us to stop bragging that we are super special, that the world should follow, we need to look inside to see what's wrong with us. We never honestly asked ourselves about race in this country," 54-year-old Mary Byrne told AFP.

Trump's challenger in November, Democrat Joe Biden, struck a sharply different tone on Saturday, tweeting: "Our nation was founded on a simple idea: We're all created equal. We've never lived up to it -- but we've never stopped trying. This Independence Day, let's not just celebrate those words, let's commit to finally fulfill them."

Protests have continued in many US cities since Floyd's killing, and more than a score took place Saturday in Washington.