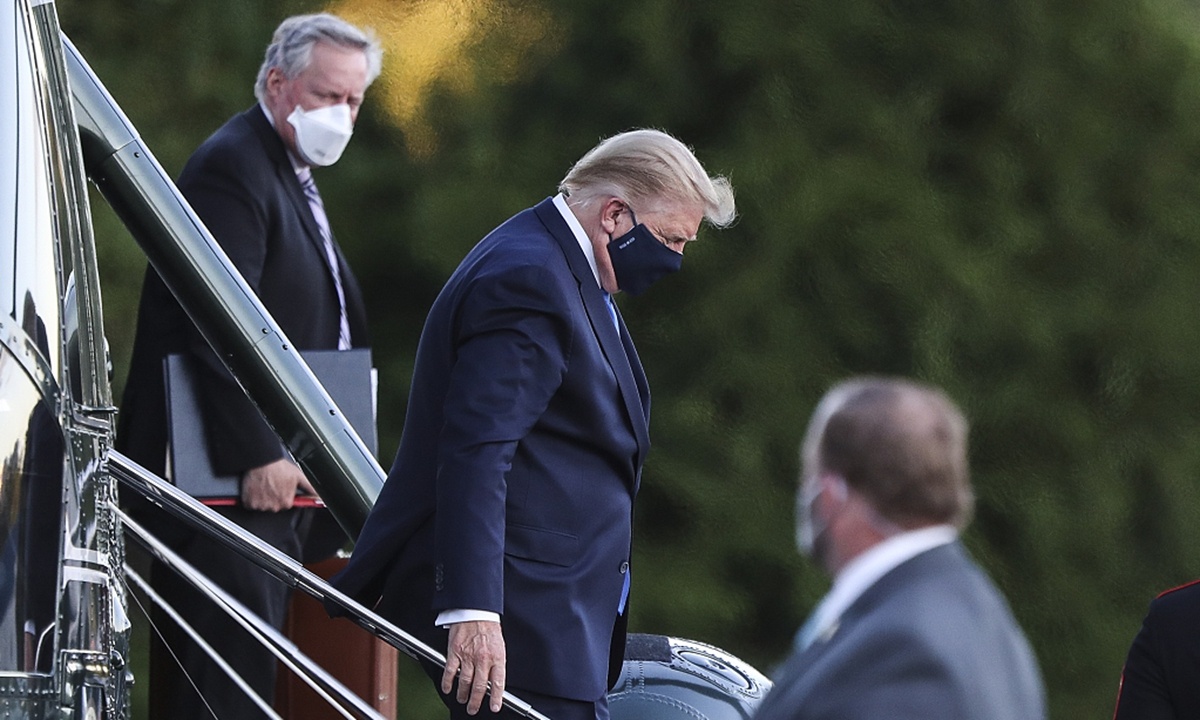 US President Donald Trump has been given the antiviral drug Remdesivir after accepting an experimental antibody treatment, the White House announced on Friday, with a Chinese virologist noting the antibody treatment is very similar to the serum therapy treatment used in China, which was proven to be safe and effective on many patients.

According to a White House press release, Trump received a dose of Remdesivir and did not require supplemental oxygen. He has so far been "doing very well and "resting comfortably." The president had earlier received a dose of an experimental antibody cocktail, the New York Times quoted a letter by Trump's physician as saying. The cocktail is developed by the drug maker Regeneron, containing two antibodies designed to block the infectivity of the coronavirus.

Trump has mild symptoms and is now being treated at Walter Reed National Military Medical Center.

Yang Zhanqiu, deputy director of the pathogen biology department at Wuhan University, told the Global Times that Regeneron's monoclonal antibody therapy treatment uses the same principles as plasma therapy treatments used in China to fight the virus. "The plasma was safe and effective on many Chinese patients, as the antibodies neutralize the coronavirus and stop it from infecting new cells," Yang said.

"The difference lies in that plasma is from human body whereas monoclonal antibodies are generated from a laboratory to mimic natural antibodies," Yang added.

But the effectiveness and safety of a certain product that is awaiting approval and massive manufacturing require extensive studies and clinical trials, analysts said.

The Regeneron antibody treatment has not been approved by the US Food and Drug Administration, but it is a promising candidate that has been allowed for compassionate use on certain patients, US media reported. Trump's decision to receive the treatment had been cleared with the FDA.

In addition to the antibody cocktail, Trump also took Remdesivir together with other drugs and supplements, such as zinc, vitamin D and aspirin.

Yang noted that physicians do not usually adopt two or more therapies simultaneously. The use of Remdesivir is part of a cocktail therapy; that is, it combines antiviral drugs and antibody therapy to accelerate and strengthen the effectiveness of the treatment and minimize possible side effects.

But so far, there is no cure yet for COVID-19, and treatment usually aims to minimize symptoms and improve a patient's own immunity to fight the virus.

Before the presidential couple were confirmed with the coronavirus, one of Trump's senior assistants, Hope Hicks, also tested positive. Hicks had accompanied Trump to some election campaign events and also attended the ceremony on September 26 for the nomination of Amy Barrett as judge of the Supreme Court.

The ceremony has been called a possible "super spreader" event, as at least four attendees, in addition to Trumps and Hicks, also tested positive for the coronavirus, including Mike Lee, Senator of Utah, Thom Tillis, Senator of North Carolina, Kellyanne Conway, former senior counselor to the president, and John Jenkins, president of the University of Notre Dame.

According to footage from the event posted online, guests had been shaking hands and hugging, and very few attendees wore masks.

Analysts noted that such a gathering seriously violated social distancing principles. No matter what the source of Trump's infection was, as it still remains unknown, such a large gathering posed a high risk of cluster infections involving senior officials, which has obviously interrupted the normal functioning of many government bodies.

The White House should ensure that nucleic acid tests are taken for all attendees, especially for those who were around Trump. It is also necessary that those attendees isolate themselves and reduce their scope of activities to avoid the spread of the virus, as it could cause a "paralysis" of the top governance and greater trouble if the situation escalates, Yang said.