It was supposed to be a scene of celebration. 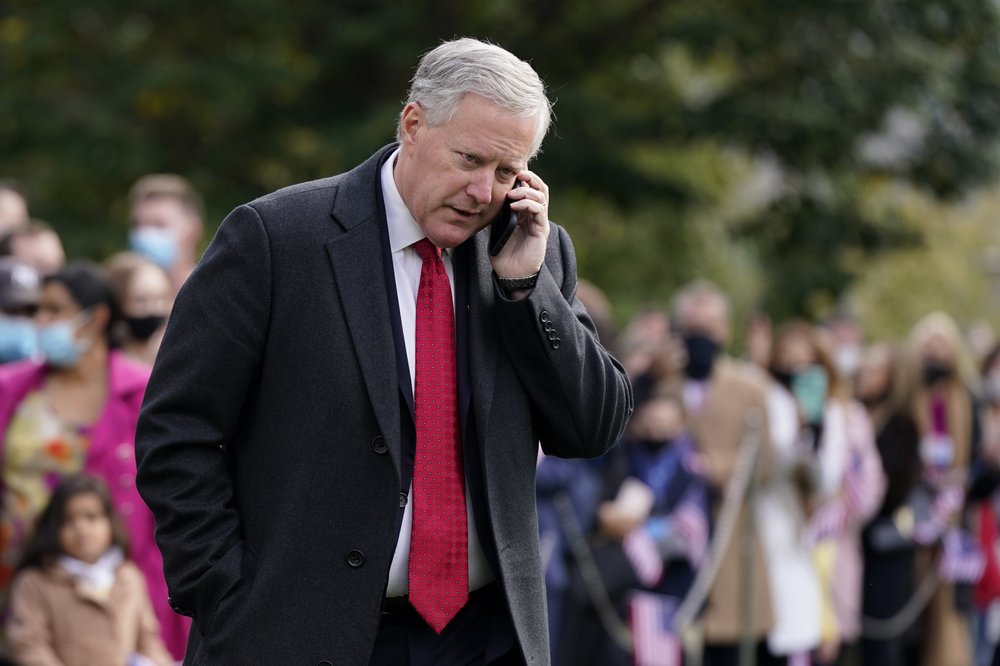 In this Oct. 30, 2020, photo, White House chief of staff Mark Meadows speaks on a phone on the South Lawn of the White House in Washington. Meadows has been diagnosed with the coronavirus as the nation sets daily records for confirmed cases for the pandemic. (File photo: AP)

Instead, the Trump campaign’s election night watch party in the White House East Room has become another symbol of President Donald Trump’s cavalier attitude toward a virus that is ripping across the nation and infecting more than 100,000 people a day.

Polls suggest that attitude was a serious drag on the president’s reelection bid as voters chose to deny Trump a second term in favor of his Democratic rival, now President-Elect Joe Biden. And the party — with few masks and no social distancing — is now under additional scrutiny after the president’s chief of staff, Mark Meadows, became the latest top White House official to contract the virus, which has now killed more than 237,000 people in the US alone.

The White House has repeatedly refused to say who else has tested positive, even as the virus continues to spread. The latest White House cluster, coming just a month after Trump’s own diagnosis and hospitalization, includes a top Trump campaign official as well as a handful of undisclosed White House staff, officials said.

The White House has been increasingly secretive about outbreaks. Many White House and campaign officials, as well as those who attended the election watch party, were kept in the dark about the diagnoses, unaware until they were disclosed by the press.

That the virus would continue to spread in the White House — even though senior staff and those who come into close contact with the president and vice president are frequently tested — has come as no surprise to public health officials who have balked at the White House’s lax approach.

“The administration was cavalier about the risks of the virus for themselves and for the country. And that’s one reason why we have so many cases,” said Dr. Joshua Sharfstein, a public health professor at Johns Hopkins University’s school of public health.

Even Senate Majority Leader Mitch McConnell has said he has been avoiding the White House since August “because my impression was their approach to how to handle this was different from mine and what I insisted that we do in the Senate, which is to wear a mask and practice social distancing,”

Meadows in particular has long tried to play down the severity of the virus. He rarely wore a mask in public, except during the period immediately following Trump’s infection. At one point, he refused to speak to reporters on Capitol Hill after they requested he wear a mask.

He was again without one during Tuesday evening’s East Room event, where more than 100 of Trump’s most loyal supporters gathered to watch the election results come in and see him deliver what they had hoped would be a victory speech.

It was a festive atmosphere, with half-empty glasses of wine and other beverages strewn across cocktail tables in front of news cameras. Meadows, who spent time with Trump’s family before-hand, was seen working the room, including giving several fist-bumps to those in attendance, before Trump took the stage early Wednesday morning.

While everyone who attended the East Room event had been tested in advance for the virus, there was no social distancing and minimal mask-wearing.

Earlier that day, Meadows had also accompanied the president to his campaign’s headquarters in Virginia, where Trump received rousing cheers from several dozen staff and volunteers. Meadows did not wear a mask, nor did other White House staffers. Campaign aides largely did.

If Meadows tested positive Wednesday — as Bloomberg News reported — he would likely have been infectious during both events, said Saskia Popescu, an epidemiologist who teaches at George Mason University.

Meadows had also traveled with Trump in the run-up to Election Day, attending dozens of rallies where he was frequently seen interacting with supporters without masks.

Trump’s refusal to abide by his own government’s public health guidelines throughout the campaign was a major source of frustration for local governments as he scheduled rally after rally in defiance of local caps on crowd sizes, even in pandemic hot zones.

While Trump had hoped his efforts to downplay the virus in a bid to revive a limping economy would help him with voters, many Republicans now believe that Trump might have won reelection had he handled things differently.

Still, Trump’s approach reflected the priorities of his supporters. AP VoteCast, a national survey of the electorate, found that about half of Trump voters called the economy and jobs the top issue facing the nation, versus just 1 in 10 Biden voters. A majority of Biden voters, meanwhile — about 6 in 10 — said the pandemic was the most important issue facing the country.

The White House did not respond to specific questions about the current outbreak, but said that contact tracing had been conducted by the White House Medical Unit, consistent with Centers for Disease Control and Prevention guidelines.

“Appropriate notifications and recommendations have been made,” the White House said.

The CDC defines “close contact” as spending at least 15 minutes within 6 feet of an infected person beginning two days before they test positive or exhibit symptoms.

But Popescu called the party, in particular, “a ripe environment for transmission to occur,” and said anyone in attendance should have been informed and asked to take precautions.

“While they might not meet CDC guidelines for exposure, I think when we’re looking at an indoor event with a lot of people for a prolonged period who are unmasked, out of an abundance of caution, everyone should be notified and encouraged to stay home,” she said.

“Now is not the time to be cavalier about the risks,” Sharfstein said.

Ohio pastor Darrell Scott, a close ally of the president who attended the party, said he was unaware any White House officials beyond Meadows had tested positive until informed by a reporter and had not been contacted by any tracer.

While Scott, like many in Trump’s orbit, continued to insist fraud was to blame for the president’s loss — despite no credible evidence supporting those claims — he also blamed Trump for several “unforced errors” during the campaign, including the way he talked about the virus.

“I can’t be upset if we shoot ourselves in the foot,” he said.

The latest outbreak came less than two weeks after several aides to Vice President Mike Pence, including his chief of staff, tested positive for the virus. And it came a month after Trump, first lady Melania Trump and at least two dozen others tested positive after Trump held large gatherings of people not wearing facemasks, including the ceremony announcing the nomination of Judge Amy Coney Barrett to the Supreme Court.