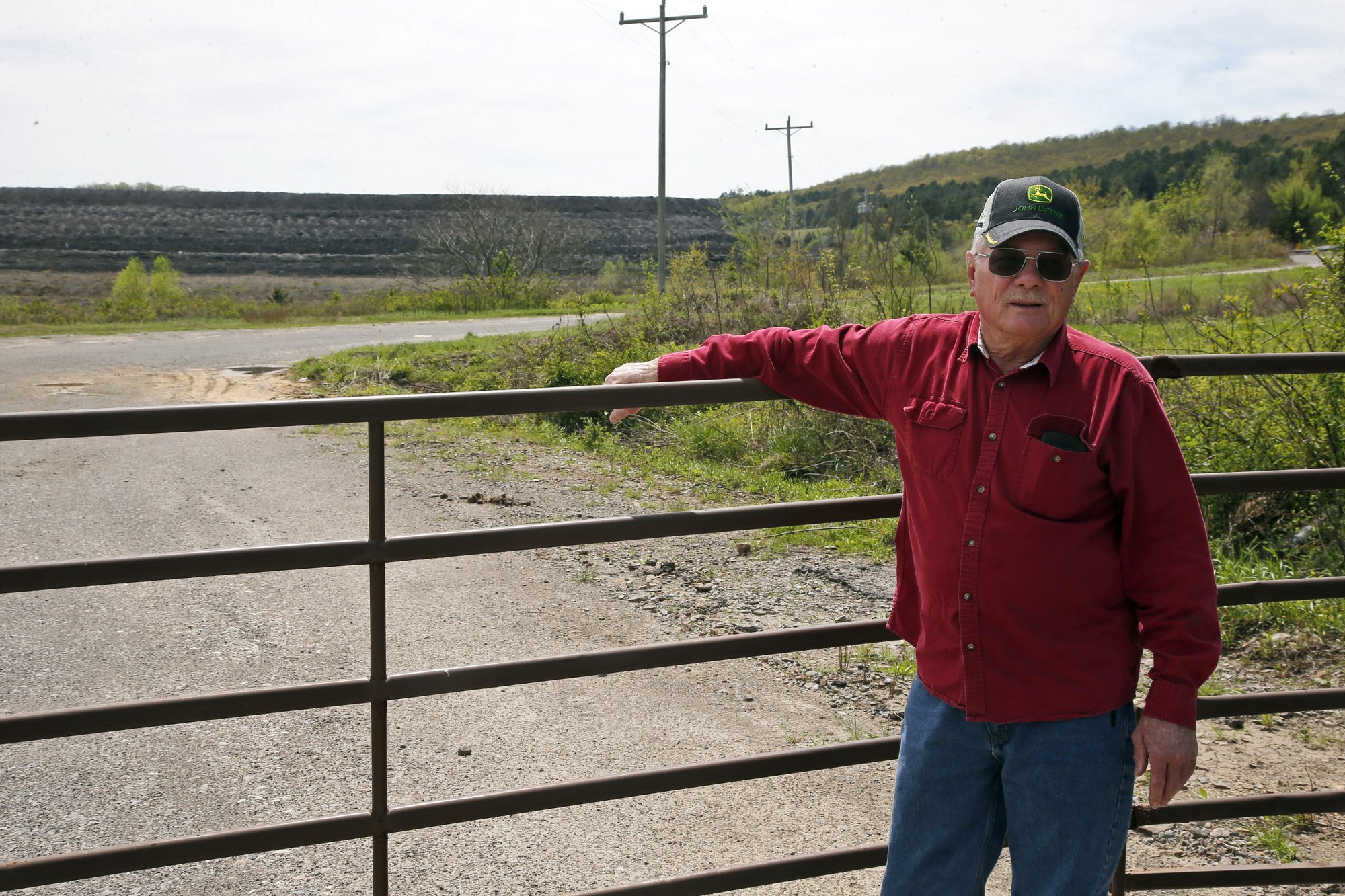 Tim Tanksley, who has been fighting for years trying to convince Oklahoma lawmakers to crack down on the coal ash dumping, stands outside a dump site in Bokoshe, Okla. April 8, 2019. (Photo: AP)

Susan Holmes’ home, corner store and roadside beef jerky stand are right off Oklahoma Highway 31, putting them in the path of trucks hauling ash and waste from a power plant that burns the high-sulfur coal mined near this small town.

For years, when Bokoshe residents were outside, the powdery ash blowing from the trucks and the ash dump on the edge of town would “kind of engulf you,” Holmes said. “They drove by, and you just couldn’t breathe.”

Over three decades, the ash dump grew into a hill five stories high. Townspeople regard the Environmental Protection Agency as the only source of serious environmental enforcement. Whenever people took their worries about ash-contaminated air and water to state lawmakers and regulators, “none of them cared,” Holmes said.

So the residents of this 500-person town have nothing but bitter warnings for similarly situated communities now that President Donald Trump’s EPA has approved Oklahoma to be the first state to take over permitting and enforcement on coal-ash sites.

“They’re going to do absolutely nothing,” predicted Tim Tanksley, a rancher in Bokoshe, about 130 miles southeast of Tulsa in a Choctaw Nation coal patch that helped fuel the railroads.

Around the country, the EPA under Trump is delegating a widening range of public health and environmental enforcement to states, saying local officials know best how to deal with local problems. Critics contend federal regulators are making a dangerous retreat on enforcement that puts people and the environment at greater risk.

One administration initiative would give states more authority over emissions from coal-fired power plants. Another would remove federal protections for millions of miles of waterways and wetlands.

Some states and counties say the EPA is also failing to act against threats from industrial polluters, including growing water contamination from a widely used class of nonstick industrial compounds. Michigan, New Jersey and some other states say they are tackling EPA-size challenges — like setting limits for the contaminants in drinking water — while appealing to the real EPA to act.

In Houston’s oil and gas hub, local officials and residents say a lax EPA response to toxic spillsduring Hurricane Harvey left the public in the dark about health threats and handicapped efforts to hold companies responsible for cleaning up.

Nationwide, EPA inspections, evaluations and enforcement actions have fallen sharply over the past two years, some to the lowest points in decades, or in history.

The agency says environmental enforcers remain on the job despite the plunging enforcement numbers.

“There has been no retreat from working with states, communities and regulated entities to ensure compliance with our environmental laws,” said George Hull, the agency’s enforcement spokesman.

“Through our deregulatory actions, the Trump administration has proven that burdensome federal regulations are not necessary to drive environmental progress,” EPA Director Andrew Wheeler, a former coal lobbyist, told lawmakers earlier this year.

Past EPA officials accuse the Trump administration of pulling back on enforcement of polluters and turning back the clock to a dirtier, more dangerous time.

“The reason that the ultimate authority to enforce the law was put into federal hands was because the states weren’t any good at it,” William Ruckelshaus said.

Now 86, Ruckelshaus served as the first administrator of the EPA in 1970, when President Richard Nixon created the agency amid a wave of public anger over contaminated air and water. The previous year, the pollutant-slicked surface of Ohio’s Cuyahoga River caught fire for only the latest time, sending smoke billowing in downtown Cleveland.

Then and now, some states lack the resources and legal authority to police big polluters. And crucially, Ruckelshaus said, some states just don’t want to. They see routine environmental enforcement as a threat to business and jobs.

“The idea that you’re going to delegate it to the states ... is completely fraudulent,” Ruckelshaus said in an interview.

Congressional Democrats allege Trump is selective in his passion for state sovereignty and has blocked states that want tighter environmental enforcement. They point to the president’s call to revoke California’s authority under the Clean Air Act to set tougher mileage standards than those Trump wants, among other examples.

Georgia has also applied to manage its coal-ash dumps and ponds. The EPA says it is talking with other interested states but declined to identify them.

Risks from coal-ash sites jumped to national attention in 2008, when a dike broke at a Tennessee coal ash pond, releasing 1 billion gallons of toxic sludge.

Coal ash — the gunk left after pollution equipment captures the worst of the toxic soot that once poured out of power plant smokestacks — contains heavy metals and carcinogens, including lead, mercury, arsenic and radium. The tiny particles can seep into the lungs and blood system.

In Oklahoma, groundwater testing at some of the ash sites shows contaminants at levels above what the government deems safe, according to Earthjustice and other environmental groups that are suing to reverse EPA’s transfer of permitting and oversight.

Patrick Riley, the state Department of Environmental Quality official in charge of Oklahoma’s coal-ash program, said the half-dozen sites will be brought up to federal standards. That includes moving some, Riley said.

The boom-and-bust cycles of the oil and gas fields govern Oklahoma’s economy. But state officials also try to support the state’s flagging coal industry, including giving what a state task force said are the highest subsidies in the US to the few companies that mine and burn Oklahoma’s high-sulfur coal. The coal-fired power plant that produces the ash dumped at Bokoshe has been one of the main beneficiaries.

The Bokoshe coal-ash dump was opened at an unlined former coal mine pit by a local outfit that was initially called Making Money Having Fun LLC, until complaints from townspeople made the ash dump notorious.

Laws designed to encourage rehabilitation of old coal pits meant the Bokoshe site was classified as a reclamation project and not an ash dump. That’s even though the coal ash long ago filled the pit and now stands more than 50 feet high over several acres.

Fearing what the ash was doing to their air and water, the ranchers, teachers and shopkeepers of Bokoshe appealed for years for government action.

During Barack Obama’s first term as president, residents went to the state capital in Oklahoma City and to Washington, D.C. Holmes herself thrust a record of the town’s complaints into the hands of the EPA’s then-administrator. Television correspondent Diane Sawyer put the tiny eastern Oklahoma town on the network news. TV crews took photos of all the asthma inhalers stashed in the lockers of Bokoshe schoolkids.

Almost a decade later, the only time excitement enters Tanksley’s voice is when the cattle rancher recalls the day the EPA acted. Tanksley stood next to an EPA staffer that day as the man gathered beakers of runoff from the site for testing.

In 2010, the EPA cited the dump for toxic discharges in violation of the federal Clean Water Act. That led the state to stop the dump from accepting hazardous wastewater from oilfield operations. The dumping of ash continued, but state regulators required the operators to do more to contain the billowing ash.

Townspeople say they have little hope left for more state or federal help for Bokoshe. They have none to offer communities in similar fights.