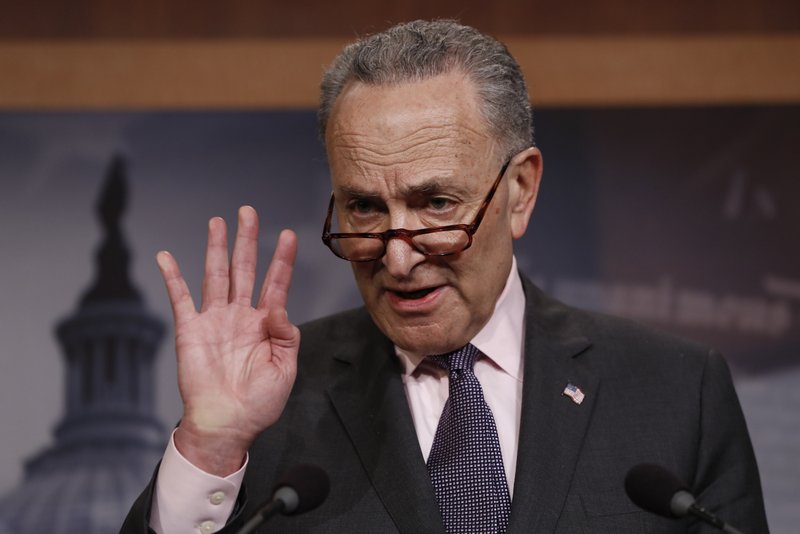 Action on gun legislation has skidded to a halt in Congress — not for a lack of bipartisan proposals, but because President Donald Trump’s stunning shift on gun policy left some in his party confused, irritated and scrambling to figure out what to do next.

Republicans squirmed over Trump’s call for stricter gun laws after the assault on a Florida high school, while Democrats seized on the opening to reach beyond a modest measure gaining traction in Congress. They unveiled a more ambitious priority list, with expanded background checks and even a politically risky ban on assault weapons.

The tug of war over the appropriate response on the school shooting remains far from settled.

Late Thursday, Trump tweeted that he’d had a “Good (Great) meeting in the Oval Office tonight with the NRA!”

The NRA has called the bulk of the proposals discussed at the White House this week “bad policy” that would not keep people safe.

White House spokeswoman Sarah Huckabee Sanders said Friday that she believed Trump had arranged the NRA meeting. She said Trump’s thinking on guns had not changed since Wednesday.

Asked if Trump had made any specific promises, Sanders said “only that he’ll continue to support the Second Amendment.”

Sanders said Trump had spoken to Republican House Speaker Paul Ryan Thursday. She said that for the moment, Trump supports an incremental proposal from Sens. John Cornyn and Chris Murphy though he could possibly go beyond that.

She said Trump wanted to strengthen background checks, but did not commit to universal background checks. She also said that while Trump “conceptually” supports age limits to purchase certain weapons, “he also knows there’s not a lot of broad support for that.”

Without a clear path forward for any legislation, Senate Majority Leader Mitch McConnell shelved the gun debate, for now, saying the Senate would turn next week to other measures. McConnell had been preparing to push ahead with the proposal from Cornyn and Chris Murphy, but even that measure faced some GOP opposition.

Congress is under pressure to act after the Marjory Stoneman Douglas High School shooting last month that left 17 dead. Lawmakers had been making incremental progress on a bill to boost participation in the existing federal background check bill.

But after Trump’s pronouncements this week, that legislation hardly mattered. Trump panned the bipartisan bill as little more than a building block for the “beautiful” and “comprehensive” legislation he envisioned would protect Americans from mass shootings.

“Many ideas, some good & some not so good,” Trump tweeted Thursday, singling out background checks. “After many years, a bill should emerge.”

Trump suggested — but did not declare — his support for a more sweeping background check bill that would require review of firearm purchases online and at gun shows. The measure, from Sens. Pat Toomey, R-Pa., and Joe Manchin, D-W.Va., has found new momentum since it was first introduced after the 2012 shooting at Sandy Hook Elementary School in Connecticut that left 20 children dead.

The president reached out to Toomey on Thursday, after the senator endured the brunt of Trump’s public criticism of lawmakers as “afraid” of the NRA, and encouraged him to pursue the bill.

The senator told Trump his backing would be needed to build support. “He wants to be helpful,” Toomey told The Associated Press.

Amid the shifting debate, the president convened yet another meeting on school safety, this time with school shooting survivors and family members of victims, and the White House considered releasing the president’s list of legislative priorities.

Beyond background checks, the president wants to use an executive order to bar the use of bump stock devices that enable guns to fire like automatic weapons. And he backs more controversial ideas, including increasing the minimum age for the purchase of assault weapons from 18 to 21, which is opposed by the NRA, and arming certain teachers, which the gun lobby supports.

Lawmakers were frustrated by Trump’s comments. Cornyn insisted his bill with Murphy, a Connecticut Democrats, was “our best and only option” for passage.

The Texas Republican dismissed Wednesday’s “brainstorming” session at the White House — calling it “Legislating 101" — and said he was not waiting for the president to produce a plan.

“Obviously, he’s important,” Cornyn said about Trump. “But it’s our job to write the legislation and he either vetoes it or he signs it.”

Democrats wasted no time quickly outlining their top three priorities: background checks, the ability to take guns away from those who pose a “clear danger,” and at least a debate on banning assault weapons like the AR-15 used at the Florida high school.

“Not every Democrat will agree with every piece, but my caucus is prepared to provide a very large number of votes to get these passed,” said Senate Minority Leader Chuck Schumer, D-N.Y. “But we can’t do it alone.”

Without clear leadership, Republicans were outwardly divided over what to do next, as their offices are being flooded with calls on both sides of the issue.

Several senators doubted Trump would be able to move an intensely partisan Congress to act on new gun laws.

“I love my president, but I just respectfully disagree with him on this issue,” said Sen. John Kennedy, R-La. “So far, there’s been a lot of chopping, but I don’t see any chips flying, and I’m not sure that’s going to change.”

Ohio Republican Sen. Rob Portman suggested that even if the Senate can find agreement, Speaker Paul Ryan, R-Ohio, will face a tougher legislative lift in the House.

“There are some pretty strong views,” Portman said. “Trust me, I’m hearing from my Second Amendment supporters and my ban-the-gun supporters. They’re very concerned on both sides.”

And some Republicans worked in the opposite direction, introducing legislation to expand gun owners’ rights and forcefully criticizing Trump’s suggestion that the federal government could take away guns without due process.

“Is anyone ok with this, because I’m sure as hell not,” Rep. Thomas Massie, R-Ky., tweeted Thursday. He produced a bill to lower the handgun purchase age requirement to 18.

“It’s going to be an ongoing process and something that we don’t expect to happen overnight,” she said.