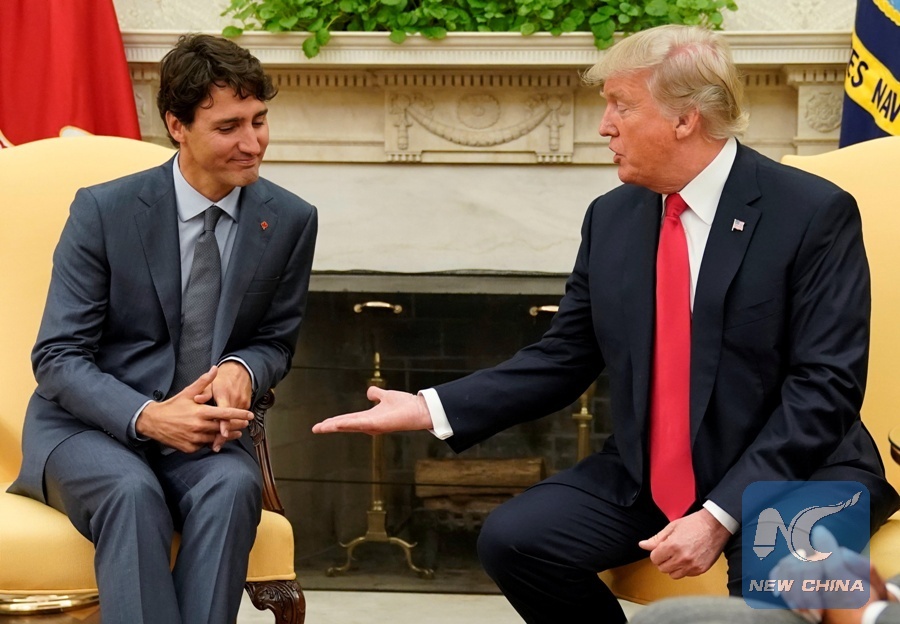 US President Donald Trump's tariffs on steel and aluminum from Canada and other key allies are a "nonsensical" policy that could threaten global trade and economic stability, a Canadian trade expert said on Tuesday.

"Any economist you talk to will say these measures are nonsensical," said Werner Antweiler, associate professor of trade policy at the University of British Columbia.

"They are not benefiting the US economy," he told Xinhua in an interview. "They will hurt the US economy, and of course they are going to hurt the economies around the world too."

Canada hit back at the Trump administration on Thursday by announcing retaliatory tariffs on up to 16.6 billion Canadian dollars (12.8 billion US dollars) worth of US steel, aluminum and a diverse list of other products.

The Canadian government has released two lists of US products, proposing a 25-percent tariff on the first list and 10 percent on the second. The countermeasures will take effect on July 1 and stay in place until the United States backs down.

Canada is also planning to challenge the US tariffs under the dispute mechanisms of the North American Free Trade Agreement and the World Trade Organization.

Antweiler said the list of countermeasure items selected by Canada targets industries concentrated in US states where Trump would feel the most economic and political pressure.

"The purpose has been to focus on industries that are particularly relevant in states that are contested," he said. "Mr. Trump and his Republican allies would be feeling the pain if these measures start hurting the economy in those states."

In addition to steel and aluminum, the list includes products such as toilet paper, playing cards, mattresses, sleeping bags, inflatable boats and whiskies.

"If you look at table two, you find whisky distilleries, which are of course more prevalent in the southern part of the country where Trump and the Republicans have particularly strong support," he said.

Antweiler said it is unclear -- but increasingly possible -- that Trump's trade attack against Canada could lead to an all-out trade war between the two allies.

"The problem is that Mr. Trump is very unpredictable," he said. "He is not playing by the rules."

"There is no way around the fact that when Trump imposes these trade measures, he is going to hurt American workers," he said. "In a trade war there are only losers and no winners."

The next escalation, if a solution is not reached soon, could be an attack against the Canadian auto sector, Antweiler said. That would be a "nightmare" scenario that would create pain on both sides of the border in an industry highly integrated between the two countries, he said.

"What has been initiated by the United States is against international treaties that we have negotiated for decades to help smooth international trade and to create prosperity in the world," Antweiler said.

In his most striking comments yet regarding Trump, Trudeau has called the tariffs on Canadian steel and aluminum "totally unacceptable."

The anti-trade measures would harm workers and supply chains on both sides of the border and are "an affront to the Canadians who died" alongside Americans in battle, the prime minister said last week.

Trump is set to meet with Trudeau and other fellow G7 leaders in the province of Quebec for an annual summit, which begins Friday. It would mark Trump's first visit to Canada since his presidential term began.