Trump's plan for military parade postponed until next year: Pentagon

U.S. President Donald Trump's plan for a military parade in Washington D.C. has been postponed until at least next year, the Pentagon said on Thursday. 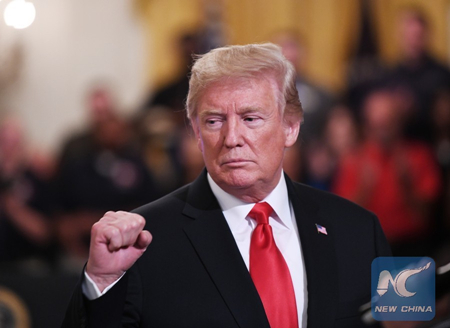 "The Department of Defense and White House have been planning a parade to honor America's military veterans and commemorate the centennial of World War I. We originally targeted November 10, 2018 for this event but have now agreed to explore opportunities in 2019," Pentagon spokesman Col. Rob Manning said in a statement.

The statement didn't reveal the reason for the postponement.

Earlier on Thursday, local media reported that the planned military parade is estimated to cost 92 million U.S. dollars, though an earlier estimate put the cost at 12 million dollars.

The ceremony is said to be largely inspired by Trump's front-row seat at France's Bastille Day military parade in Paris last year.

The United States has not held a major military parade in Washington D.C. since the end of Operation Desert Storm was marked in 1991.