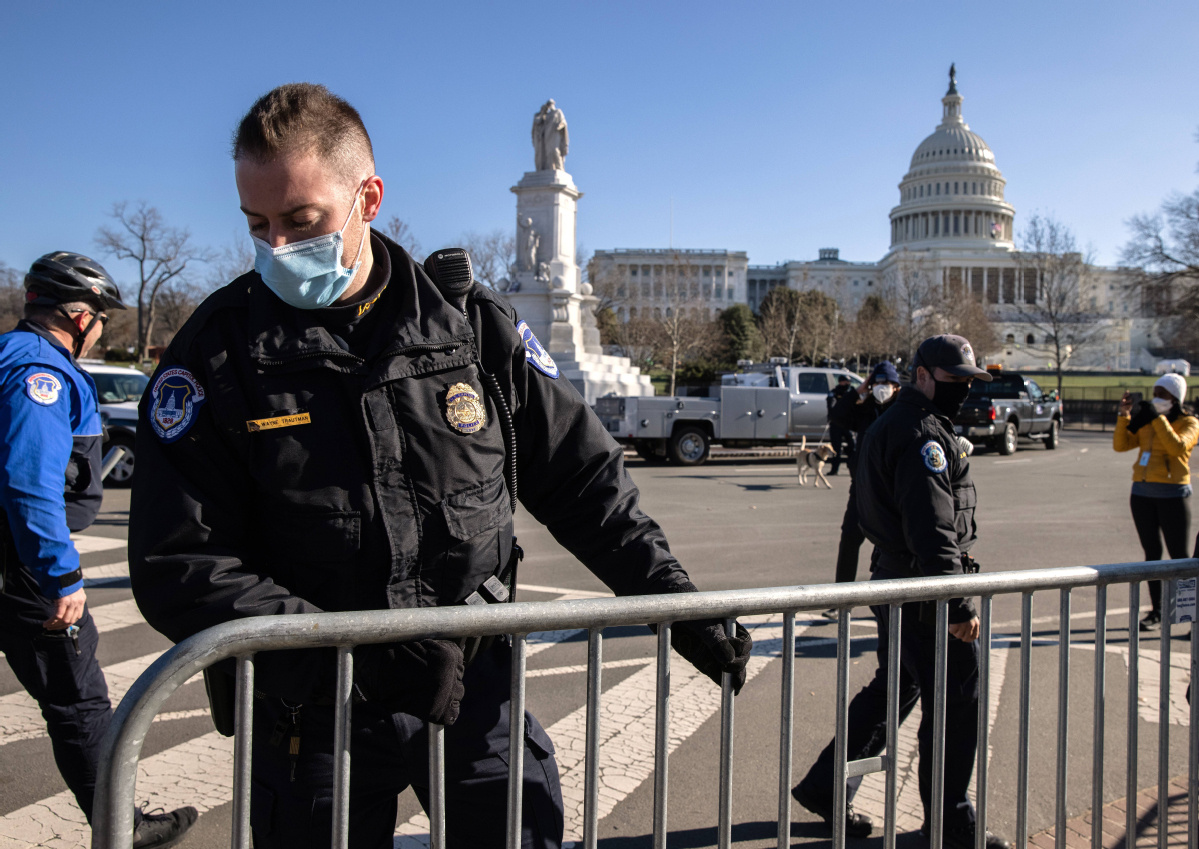 Police set up a fence near the US Capitol on Thursday in Washington. JOHN MOORE/AGENCE FRANCE-PRESSE

Top Democrats in the US Congress on Thursday called for the immediate removal from office of President Donald Trump for inciting protesters who stormed the US Capitol building Wednesday, resulting in five deaths.

"This president should not hold office one day longer," said Senate Minority Leader Chuck Schumer of New York, who will become the majority leader with the seating of two new Democratic senators elected in Georgia on Tuesday.

Schumer said that the quickest and most effective way to remove the president from office would be for Vice-President Mike Pence to immediately invoke the US Constitution's 25th Amendment－a procedure for removing the president in the event he is unable to perform his duties, such as incapacitation.

Hours later, Speaker of the House Nancy Pelosi said Trump "incited an armed insurrection against America" and urged Pence to use the 25th Amendment to remove Trump. Congress "may" be prepared to move forward with an impeachment trial otherwise, she said.

But Pence opposes the idea, according to an adviser.

Trump posted a video on Thursday evening on Twitter, the social media platform where he had been suspended for 12 hours starting Wednesday.

"Like all Americans, I am outraged by the violence, lawlessness and mayhem," Trump said. "America is and must always be a nation of law and order. The demonstrators who infiltrated the Capitol have defiled the seat of American democracy. To those who engaged in the acts of violence and destruction, you do not represent our country."

Later in the speech, Trump said: "A new administration will be inaugurated on January 20. My focus now turns to ensuring a smooth, orderly and seamless transition of power."

However, Trump's initial reaction to the incidents at the Capitol fell short of condemning the violence and instead doubled down on unsubstantiated allegations that the presidential election was "fraudulent", despite dozens of losses in courts in attempts to overturn the outcome. He had encouraged his supporters to stage a demonstration on Capitol Hill during a rally outside the White House on Wednesday.

With less than two weeks to go before his presidency ends on Jan 20, the likelihood of invoking the disability clause of the 25th Amendment or again impeaching Trump is remote.

President-elect Joe Biden, speaking on Thursday in Delaware, called the storming of the Capitol "an assault on the most sacred of American undertakings".

"We have a president who has made his contempt for the rule of law clear," Biden said.

One Republican, a frequent critic of Trump, joined the call for Trump's removal.

"All indications are that the president has become unmoored not just from his duty nor even his oath but from reality itself," said Representative Adam Kinzinger of Illinois. "It's time to invoke the 25th Amendment and to end this nightmare."

Three Democratic members of the House Judiciary Committee－David Cicilline, Ted Lieu and Jamie Raskin－said Thursday that they were circulating articles for the impeachment of Trump over the violence.

Trump, if convicted by the Senate, would be unable to hold public office, ending any hope of his returning to the White House in the 2024 election.

"Our deep political divisions, coupled with the erosion of the core purposes of many of our major institutions for more partisan ends and, as a result, the decline of their actual capacity to perform their basic functions, leave us in dire circumstances," Stanley Renshon, a political scientist at City University of New York, told China Daily.

Some advisers to the president and administration officials have quit in protest of the storming of the Capitol.

The acting chairman of the White House Council of Economic Advisers, Tyler Goodspeed, resigned on Thursday, as did the president's deputy national security adviser, Matt Pottinger, a person familiar with his decision told The New York Times.

"Yesterday, our country experienced a traumatic and entirely avoidable event as supporters of the president stormed the Capitol building following a rally he addressed," she wrote. "As I'm sure is the case with many of you, it has deeply troubled me in a way that I simply cannot set aside."

Chinese Foreign Ministry spokeswoman Hua Chunying responded on Friday over some Western media claims that Chinese media are playing on "propaganda" by comparing the storming of the US Capitol with the violence in Hong Kong's Legislative Council building in July 2019.

Hua said that the US media have done a lot of coverage on the violence at the US Capitol, but she didn't understand why it becomes "propaganda" and or even "disinformation" when Chinese media report about it.

It reflects that some Western individuals hold double standards and a sense of superiority and ideological bias toward China, she said.