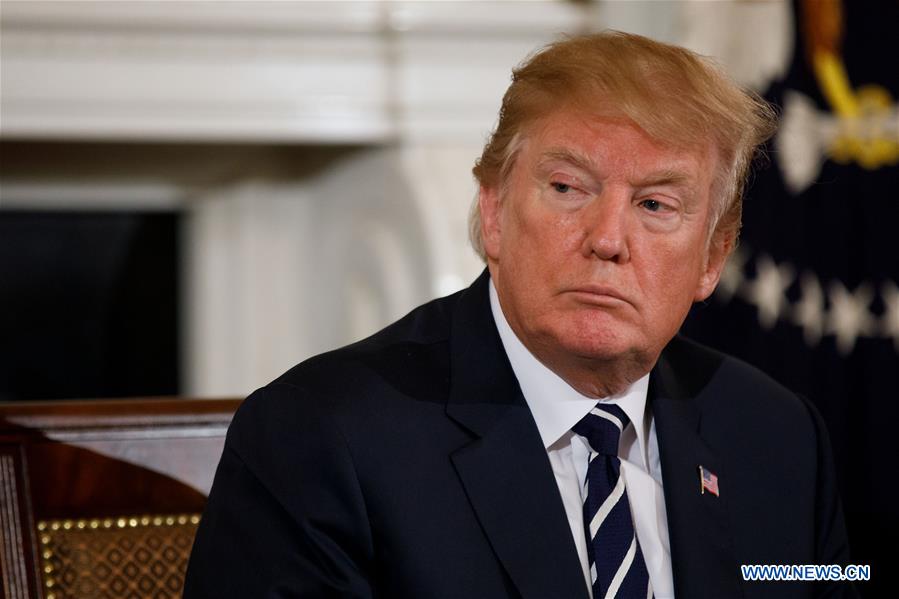 Top aides to U.S. President Donald Trump rushed Thursday to deny authorship of an explosive and anonymous op-ed published by The New York Times a day earlier, which has revealed a "resistance" inside the administration against the president.

The Times said in a note that the op-ed, titled "I Am Part of the Resistance Inside the Trump Administration," was penned by a senior Trump administration official who has vowed to thwart parts of the president's agenda and "his worst inclinations."

The piece has put Washington into a wild guessing game as to the identity of the author, and several top Trump administration officials, including Vice President Mike Pence, Secretary of State Mike Pompeo, offered their denials Thursday.

A spokesman for Pence said the vice president "puts his name on his Op-Eds."

"The @nytimes should be ashamed and so should the person who wrote the false, illogical, and gutless op-ed," spokesman Jarrod Agen said on Twitter.

Pompeo said during a trip to India that he was not the author and condemned the Times for publishing the article, while Pentagon spokeswoman Dana White said Defense Secretary James Mattis did not write it.

In the op-ed, an unidentified official wrote while many senior officials "want the administration to succeed," they are "working diligently from within to frustrate parts of his agenda."

"We believe our first duty is to this country, and the president continues to act in a manner that is detrimental to the health of our republic," the author wrote.

The Times said it is publishing the anonymous piece at the request of the author whose identity is known to it and "whose job would be jeopardized by its disclosure."

"We believe publishing this essay anonymously is the only way to deliver an important perspective to our readers," the note added.

The author also denounced in the piece the president's "amorality" and described his impulses as "generally anti-trade and anti-democratic" and his leadership style as "impetuous, adversarial, petty and ineffective."

Besides, the op-ed revealed that Trump's Cabinet originally speculated about invoking the 25th Amendment, which would start a complex process for removing the president, but they did not go with it because "no one wanted to precipitate a constitutional crisis."

Former CIA Director John Brennan called the piece "active insubordination...born out of loyalty to the country."

Trump questioned the existence of the author via Twitter on Wednesday.

"Does the so-called 'Senior Administration Official' really exist, or is it just the Failing New York Times with another phony source?" Trump wrote.

"If the GUTLESS anonymous person does indeed exist, the Times must, for National Security purposes, turn him/her over to government at once!"

Trump earlier told reporters the article was a cowardly product of dishonest media.

In a statement, White House press secretary Sarah Sanders said the person behind the op-ed chose to "deceive, rather than support, the duly elected President of the United States" and called on the "coward" to resign.

Sanders also urged the Times to issue an apology.

The release of the op-ed also came amid excerpts from an explosive book, titled "Fear: Trump in the White House," which painted a chaotic White House run under Trump.

Trump said the book, written by U.S. veteran investigative journalist Bob Woodward, "means nothing" and called it a "work of fiction."

James Dao, who runs the Times op-ed page, told CNN he received the article through an intermediary several days ago, calling the timing of piece's publication and the Woodward book "a coincidence."

The author's identity is known to the opinion page editors of the Times, the newspaper said.