Trump’s trophy day of sumo, golf and cheeseburgers in Japan 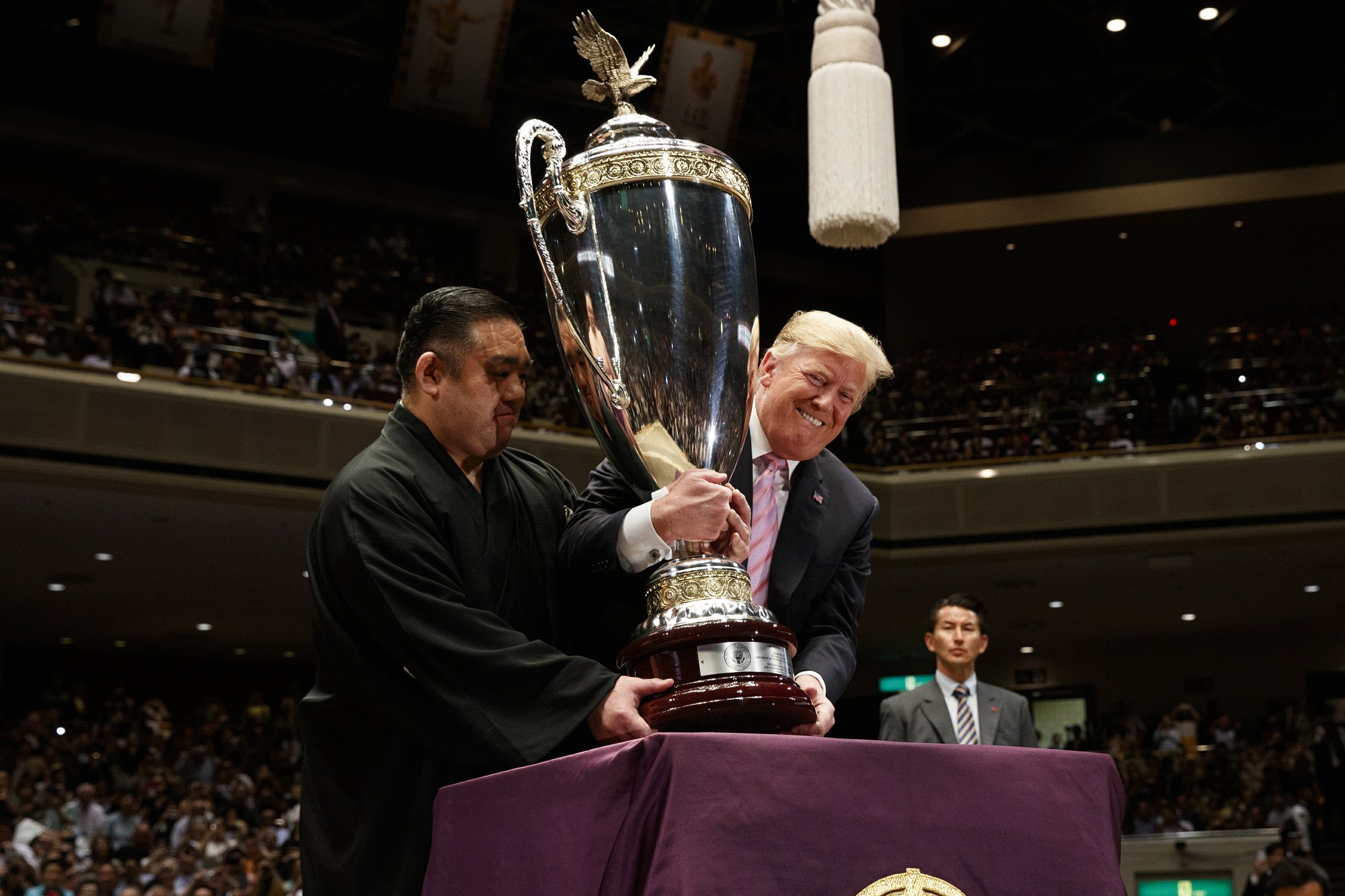 US President Donald Trump picks up the "President's Cup" to present to the Tokyo Grand Sumo Tournament winner Asanoyama, at Ryogoku Kokugikan Stadium, May 26, 2019, in Tokyo. (Photo: AP)

President Donald Trump presented a special US-made trophy to the winner of a sumo tournament Sunday as he got a taste of one of Japan’s most treasured cultural institutions.

The honor given to Trump was part of a charm offensive by Japanese Prime Minister Shinzo Abe as he courted Trump with three things close to the American leader’s heart: wrestling, cheeseburgers and golf.

Sumo diplomacy, to sum it up.

The president, first lady Melania Trump, Abe and his wife, Akie, joined an estimated 11,500 fans at Ryogoku Kokugikan Stadium to watch massive and muscular men, in bare feet and loin cloths, battle for supremacy in a small ring of dirt.

At the match’s end, Trump stepped into the ring and presented the eagle-topped “President’s Cup” to the champion, Asanoyama. Trump, the first American president to participate in such a ceremony, said later it was an “incredible evening.”

“That was something to see these great athletes,” Trump said before having dinner with the Abes at a hibachi restaurant.

Trump’s four-day state visit to Japan is designed to demonstrate the strength of the U.S.-Japan alliance. Earlier Sunday, Abe warmly welcomed Trump to Mobara Country Club, south of Tokyo, for a round of golf, their fifth since Trump became president.

Abe is trying to placate Trump amid growing U.S.-Japan trade tensions and the threat of auto tariffs. Japan also is contending with the continued military threat from North Korea , a concern seemingly heightened by Trump’s apparent dismissal of the North’s recent tests of short-range missiles that could strike Japan.

Despite several antagonistic presidential tweets, the day was all about keeping Trump happy.

First it was golf. Trump and Abe played 16 holes, joined by Japanese pro Isao Aoki. On the lunch menu: Double cheeseburgers made with U.S. beef.

Then Abe introduced Trump to Japan’s ancient sport of sumo wrestling , which Trump has said he finds “fascinating.”

Loud applause greeted Trump as he entered the arena and took his seat a few rows behind the ring. It was a break from the custom of sitting cross-legged on a mat.

The Japan Sumo Association instituted some safety precautions due to Trump’s participation, including selling fewer same-day tickets and banning the ritual of throwing seat cushions as an expression of disappointment.

Trump sat with his arms crossed over his chest for much of the time, and when the match ended, he walked onto the stage wearing dark slippers — shoes are banned from the ring — to present the cup to Asanoyama.

Trump read from a scroll, praising Asanoyama’s “outstanding achievement.” He hoisted the hefty cup, which the White House said was 54 inches (137 centimeters) tall and weighed 60 pounds to 70 pounds (27 kilograms to 32 kilograms), into Asanoyama’s arms with the help of an official. Abe also presented a trophy to Asonoyama, and the champion received a third one sponsored by the emperor.

Trump had the trophy made for the sumo winner, and Japanese media informally called it the “Trump Cup.”

Trump’s attendance at the annual sumo tournament recalled the time he spent promoting the World Wrestling Federation in the United States. Trump sponsored major events, appeared in bits and was inducted into the World Wrestling Entertainment Hall of Fame in 2013.

Trump awaited another honor Monday when he was to become the first foreign leader to meet with Japan’s new emperor, Naruhito, since he ascended to the throne on May 1. Trump and Abe planned more formal talks and scheduled a joint news conference. Trump also was to be the guest of honor at a banquet hosted by the emperor at Japan’s Imperial Palace.

“We’ve had a great time, a great day, and tomorrow is really the big event, a very important event in the history of Japan,” Trump said just before enjoying a dinner of grilled chicken, Wagyu beef and vanilla ice cream at a hibachi restaurant with Abe and their wives. “It’s over 200 years since something like this has happened so it’s a great honor to be representing the United States.”

The Abe-Trump alliance began even before Trump took office in January 2017, when Abe rushed to New York to greet the president-elect at Trump Tower after Trump’s election two months earlier. Japan is deeply dependent on the U.S. for security, and Abe has tried to encourage Trump to maintain international agreements and keep pressure on North Korea.

Golf has been a bonding activity for two leaders who love the game.

“We were able to exchange our views frankly in a cozy atmosphere. It was wonderful,” Abe told reporters as he returned to his official residence from the country club. He tweeted a selfie photo of him and Trump smiling widely on the greens.

Trump tweeted that he’d had “Great fun and meeting with Prime Minister @AbeShinzo.” But Trump continued to stew about politics back home, claiming that “Numerous Japanese officials told me that the Democrats would rather see the United States fail than see me or the Republican Party succeed - Death Wish!”

Tradition holds that American presidents and candidates avoid politicking while on foreign soil, but Trump is not one to abide by such norms. He also tweeted negatively about Democratic presidential rival Joe Biden, a former vice president.

Trump played down North Korea’s recent series of short-range missile tests and tried to lower expectations that he and Abe will make significant headway on trade issues at their Monday meeting.

Trump has sought a bilateral deal with Tokyo since he pulled the U.S. from the multinational Trans-Pacific Partnership trade agreement two years ago, though analysts expect no breakthroughs during the trip.

“Great progress being made in our Trade Negotiations with Japan. Agriculture and beef heavily in play. Much will wait until after their July elections where I anticipate big numbers!” he wrote, referring to Japan’s upcoming parliamentary elections.

Trump has threatened Japan with new tariffs on imports of autos and auto parts, citing national security grounds. He has suggested he will impose levies if the U.S. cannot win concessions from Japan and the European Union. In April, Japan’s trade surplus surged almost 18% to 723 billion yen ($6.6 billion).