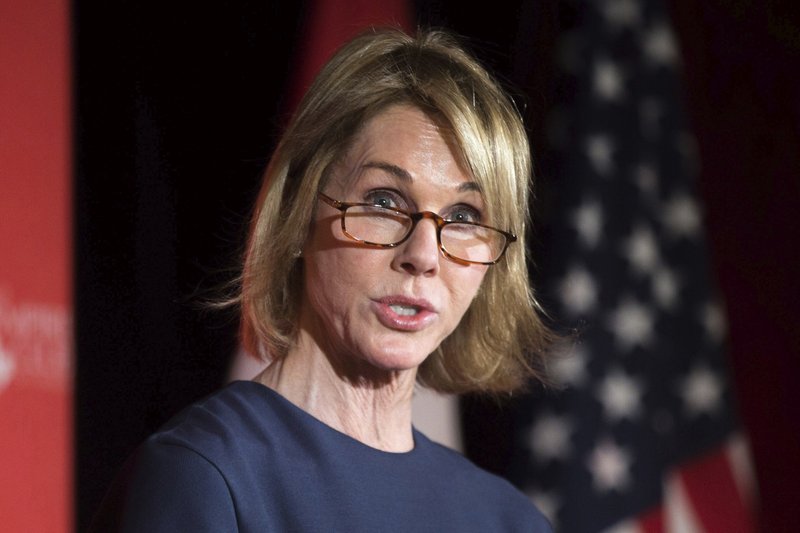 Kelly Knight Craft, US Ambassador to Canada, speaks about NAFTA and Canada-US relations at an Empire Club meeting in Toronto April 4, 2018. (Photo: AP)

US President Donald Trump’s nominee to be the next US envoy to the United Nations on Wednesday defended her record on climate change, saying it is a “real risk to our planet” that must be addressed.

Kelly Knight Craft told the Senate Foreign Relations Committee that she believes human behavior has contributed to climate change and she’ll push countries deal with it. However, she also said the United States should not have to bear an “outsized burden” in mitigating its effects that harm American economic growth.

“If confirmed, I will be an advocate for addressing climate change,” she said.

Her comments came in response to questions from Democrats on the panel prompted by previous remarks she made doubting the causes and severity of climate change . Democrats are also concerned about possible conflicts of interest as she holds extensive investments in fossil fuels.

“Climate change needs to be addressed as it poses real risk to our planet,” she said. “Human behavior has contributed to the changing climate. Let there be no doubt: I take this matter seriously, and if confirmed, I will be an advocate for all countries to do their part in addressing climate change.”

The Trump administration has been criticized by environmentalists and scientists for rolling back regulations on greenhouse gas emissions and announcing its withdrawal, effective next year, from the Paris Climate Accord that aimed to limit climate change.

Craft is a longtime GOP activist from Kentucky who is currently US ambassador to Canada. She would be first major political donor to occupy the UN post. She said that withdrawing from the Paris agreement did not mean the administration was ceding a leadership role on climate change.

“We don’t need to be a member to show leadership,” she said, arguing that developing countries like China and India were not being asked to make the same contributions as the United States.

Craft has been credited by supporters with playing a major role in her current role in helping to secure a proposed new trade agreement between the US, Canada and Mexico but has been criticized for frequent absences from Ottawa. Craft testified that all of her travel had been approved in advance by the State Department and that she and her husband had paid for all personal trips.

In addition to climate change, Craft also faced Democratic questions about her relative lack of diplomatic experience, which her Republican supporters said was belied by her two years as serving as the top envoy to a close ally and neighbor.

Craft vowed to continue the efforts of Trump’s first ambassador to the UN, Nikki Haley, to push for reform at the world body and to fight against anti-Israel resolutions and actions by the United Nations and its affiliated agencies. During Haley’s tenure, the administration withdrew from the UN Human Rights Council and the UN educational and scientific agency for adopting positions it deemed to be hostile to Israel.