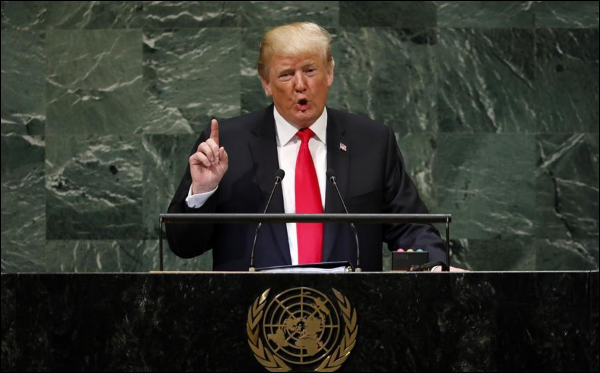 US President Donald Trump addresses the General Debate of the 73rd session of the UN General Assembly at the UN Headquarters in New York, Sept. 25, 2018. (Photo: Xinhua)

US President Donald Trump on Tuesday delivered his speech at the United Nations General Assembly (UNGA), which US experts say is indicative of a zero-sum worldview that is detrimental to world stability and prosperity.

Trump touted his "America First" foreign policy and defended actions under this belief.

While highlighting his commitment to "putting sovereignty above global governance," he attacked globalism, and lashed out at several international organizations and treaties, such as the UN Human Rights Council, the International Criminal Court and the Iran nuclear deal, all of which his administration has said it would exit or impose sanctions against.

Kyle Ferrier, an analyst for the Washington-based Korea Economic Institute of America, told Xinhua that "Trump's speech attempted to reframe his 'America First' foreign policy into something that would be more universally understandable: patriotism."

"Dressing up his foreign policy, however, is not going to allay widespread concerns about US withdrawal from global governance," Ferrier said.

"Trump's foreign policy is a mixture of anti-globalism and traditional conservativism, which don't often align," the expert said.

Dan Mahaffee, senior vice president and director of policy at the Center for the Study of the Presidency and Congress, told Xinhua that "in his speech, President Trump drew on his own belief in American sovereignty, as well as the advice being given to him by advisors like John Bolton and Stephen Miller."

"In this framework, international institutions present a threat to American sovereignty, especially at a time when issues like immigration, trade, and the role of frameworks such as alliances and multilateral institutions limit American freedom of action," he said.

"While they espouse a belief in the sovereignty of nations, they also acknowledge that there are instances where another nation's reliance on the United States for military protection or economic ties presents an opportunity for the United States to have legitimate grievances about those policies that they pursue that are counter to US interests," he added.

"It does shift significantly away from the benefits that the United States has achieved in its partnerships and alliances with other countries as it better reflects President Trump's zero-sum worldview," he said.

Christopher Galdieri, assistant professor at Saint Anselm College, said that "since his first flirtations with running for office, Trump has seen the United States as getting the short end of the stick when it comes to relations with other countries, particularly in the realms of trade deals and multilateral agreements."

"Trump appears to view relations with other countries in zero-sum, bilateral terms -- there should be two parties to agreements, and the United States should get the better of the other country in the deal," he said. "Similarly, he dislikes groups like NATO (North Atlantic Treaty Organization) because he sees them as somehow taking advantage of the United States."

However, Douglas Paal, vice president for studies at the Carnegie Endowment for International Peace, said that Trump's speech "is a campaign statement for the mid-terms, making incredible claims for success."

"Trump really does not care about other country's systems, so he means not to interfere in that. But if a country poses a threat -- military or economic -- to the US, the US will work against it," he said. "The speech is about equally uninformative about policy, although we should be glad he is less belligerent regarding North Korea (the DPRK)."

In his speech, Trump said that his meeting with the Democratic People's Republic of Korea (DPRK)'s top leader, Kim Jong Un, was productive. However, he added that sanctions on the nation will stay in place "until denuclearization occurs."

"The biggest difference between Trump's 2018 and 2017 UNGA speeches is how he characterized North Korea (the DPRK)," said Ferrier.

Last year, Trump used the derogative nickname of "rocket man" for Kim and called the DPRK regime a "band of criminals." This year, Trump thanked Kim for his courage in taking recent diplomatic steps. Comparing the two speeches is a reminder of how much the Korean Peninsula issue has changed in a year, Ferrier said.