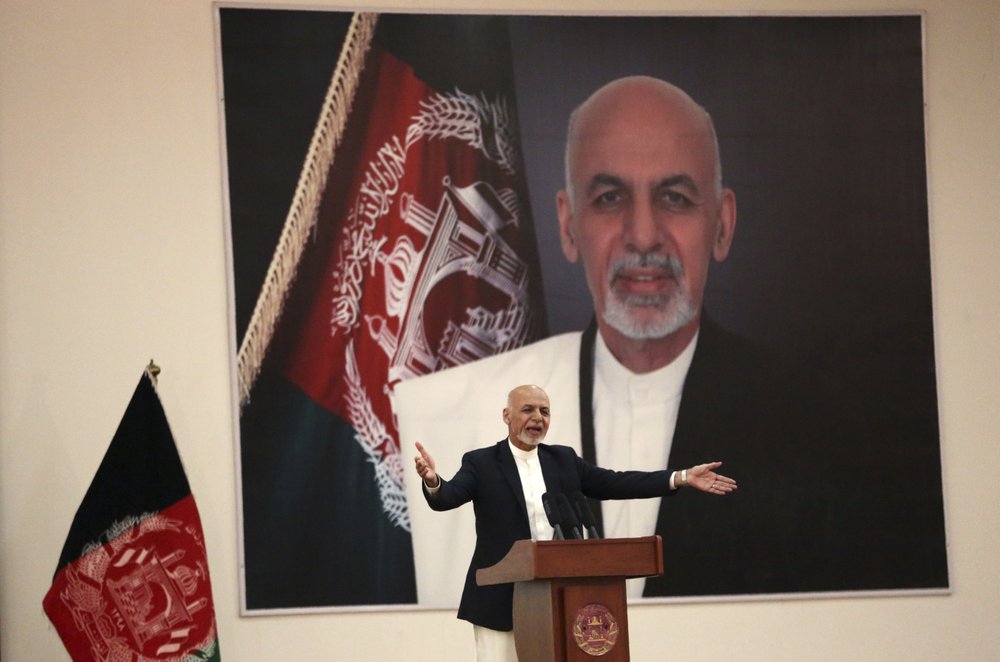 In this Sept. 9, 2019, file photo, Afghan President Ashraf Ghani speaks during a ceremony to introduce the new chief of the intelligence service, in Kabul, Afghanistan. (Photo: AP)

President Donald Trump’s sudden halt to US-Taliban talks looks like a gift to the beleaguered Afghan president, who has insisted on holding a key election in less than three weeks’ time despite widespread expectations that a peace deal would push it aside. Now, with an agreement to end America’s longest war on hold, Afghanistan suddenly faces a presidential vote amid warnings that it’s not ready — and the threat of even more violence.

The Taliban, who control or hold sway over roughly half the country, have told Afghans to boycott the vote and warned that rallies and polling stations would be targets. Spurned by Trump on the brink of a deal they said had been “finalized” to end nearly 18 years of conflict, the insurgent group is more distrustful than ever and has vowed to keep fighting. The talks are “dead,” Trump now says.

The Afghan people, essentially shut out of the talks, want a say in their fate. But if this election is as chaotic as last year’s parliamentary vote and the 2014 presidential one, some observers fear the Afghan government could be badly weakened at a pivotal time.

Trump’s surprise weekend announcement benefits Afghan President Ashraf Ghani, who was sidelined in the negotiations as the Taliban dismiss his government as a US puppet. Ghani insists the Sept. 28 election go ahead, even as the US seemed to be more interested in signing a deal with the Taliban and committing to immediate intra-Afghan talks on the country’s political future.

So certain were many candidates that the election would be delayed — and that an interim government might be formed instead — that they hadn’t bothered to campaign. The uncertainty also restricted Ghani; with US-Taliban talks seemingly hurtling toward a deal he had been holding “virtual” campaign rallies via video conference instead of traveling out of the capital, Kabul. He seeks a second five-year term and what he calls a strong mandate to deal with the Taliban.

“Let the people decide,” Ghani declared on Monday, and vowed not to allow the “slightest threat” to the legitimacy of the vote.

Now as many scramble to comprehend the breakdown in the peace process, some are pleading for stability in a country with little of it.

“Today more than ever Afghanistan needs a political leadership who will receive from citizens a renewed democratic mandate to set the country on a course to peace,” the European Union’s mission to Afghanistan said. “Now is time for a reduction in violence,” the British high commission said. Both are major election funders in a country where the international community pays for much of the process.

The US-Taliban talks could still resume and the Taliban have signaled they are open to that. But time is quickly running out for a deal before the election. The Taliban have said that under the “finalized” deal the intra-Afghan talks were set to begin on Sept. 23, five days before the vote.

Ghani, who Trump said had been invited to the now-canceled Camp David talks, could still visit Washington if he attends the annual United Nations General Assembly of world leaders that starts on Sept. 24. It’s a chance to make his case for an elected Afghan government to speak directly with the Taliban instead of an interim one.

But confidence in the Afghan electoral process is low. The 2014 presidential vote led to months of turmoil ending in a shaky national unity government between Ghani and his rival, now-Chief Executive Abdullah Abdullah, who alleged fraud. Last year’s parliamentary elections were so chaotic that Ghani fired the entire Independent Electoral Commission.

This year’s vote already has been delayed since April as the electoral machinery was replaced. And the country hardly seems ready even now, a local watchdog, the Transparent Election Foundation of Afghanistan, warned last week.

One major problem has been the confusion about how the US-Taliban negotiations would affect the election, along with the lack of international consensus to prioritize “these two momentous processes.” That has led to political disunity and “scattered preparations” for the vote, it said.

Taliban attacks are also a danger. At least 56 people were killed and 379 wounded in election-related violence during last year’s polling, the UN has said.

Of the 5,373 polling centers for the current election some 400 to 500 are either in areas controlled by the Taliban or under high threat, a spokesman with the electoral commission, Aziz Ibrahimi, said Monday. Thousands of security forces will be deployed.

In addition, the majority of the 17 candidates have alleged that Ghani has been using government resources for his campaign. While there is no reliable national election polling in Afghanistan, many Afghans expect him to win.

“It would have been smarter to delay the election on logistical grounds months ago,” said Jarrett Blanc, the deputy US special representative for Afghanistan and Pakistan from 2012 to 2014. Each Afghan election has weakened the perception of the government and this vote could be “incredibly damaging.”

There will certainly be allegations of fraud which “will lead, at best, to major delays in declaring a result and, at worst, to a paralyzing political crisis that may require US mediation,” said Michael Kugelman, deputy director of the Asia program at the Wilson Center. Either will complicate efforts to resume talks because “once Afghanistan is in full-on election mode, the political class will be too consumed with the poll to focus on anything else.”

But an influential joint statement issued last week by several former US ambassadors to Afghanistan said there was a strong argument for the election to go ahead.

“Millions of Afghans have risked, and again are prepared to risk, death to vote,” they said. “It is not up to the United States to deprive them of this opportunity to determine who speaks for the Afghan state.”

The former ambassadors acknowledged the risks, including a possible runoff vote that could take months and delay any intra-Afghan talks. But the struggle within Afghanistan’s politically fractured society to decide who might make up an interim government, they said, could take just as much time.