WORLD Trump says COVID-19 is 'receding' in US

Trump says COVID-19 is 'receding' in US 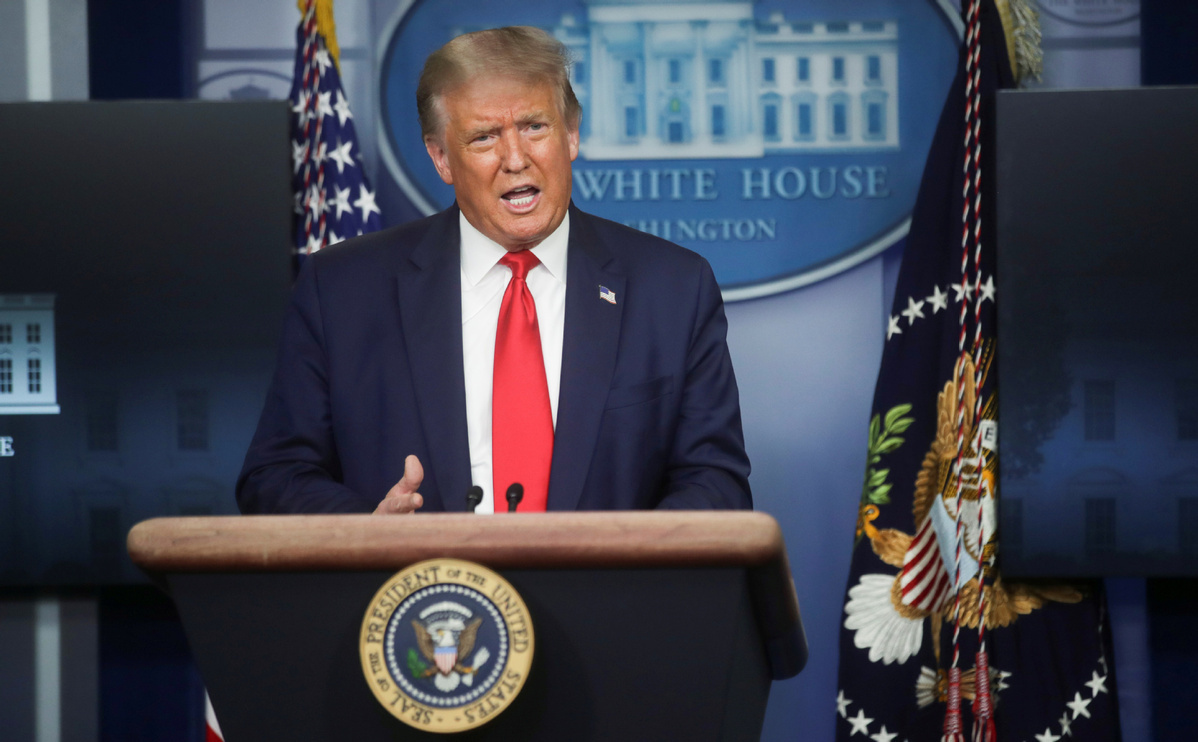 US President Donald Trump speaks during a coronavirus disease (COVID-19) pandemic briefing in the Brady Press Briefing Room of the White House in Washington, US, Aug 3, 2020. (Photo: Agencies)

President Donald Trump said Monday that the coronavirus is "receding" in the United States, one day after his White House Coronavirus Task Force coordinator said the country has entered a "new phase" of the pandemic that is increasing outbreaks in both rural and urban areas.

"We are beginning to see evidence of significant progress nationwide," Trump said during a news conference at the White House. "An encouraging sign, very encouraging, I have to add, that the virus is receding."

But Dr Deborah Birx told CNN on Sunday that increasing outbreaks in both rural and urban areas are "different from March and April" and now are "extraordinarily widespread".

The comment sparked Trump to tweet earlier Monday that Birx was "pathetic", the first time Birx has publicly drawn Trump's criticism, though he has previously criticized Dr Anthony Fauci, the nation's top infectious disease specialist and a fellow member of the administration's coronavirus task force.

Trump tweeted that after House Speaker Nancy Pelosi criticized Birx for being "too positive" on his handling of the pandemic, Birx "took the bait & hit us".

Asked at his Monday news conference about his tweet on Birx, Trump said: "She's a person I have a lot of respect for," while defending his administration's response to the virus.

But Fauci defended Birx for saying that the US has entered a "new phase" of the pandemic, putting himself at odds with Trump.

Fauci said Monday that Birx had been referring to the "inherent community spread" that is occurring in some states, adding: "When you have community spread, it's much more difficult to get your arms around that and contain it."

Speaking during a news conference with Connecticut Governor Ned Lamont, Fauci called the community spread "insidious" and noted that it was happening outside of confined spaces like nursing homes and prisons.

Fauci also warned Monday against reopening schools in coronavirus hot spots. He said that while the nation's "default principle" should be that children return to school, "to say that every child has to go back to school is not really realizing the fact that we have such a diversity of viral activity".

Fauci, the head of the National Institute of Allergy and Infections Diseases, made his comments by video online to physicians and medical students at New Hampshire's Dartmouth-Hitchcock Medical Center.

Trump said he is looking at steps he can take with executive orders on issues like stopping evictions from federally backed housing if a deal can't be reached soon with Democrats in Congress.

"A lot of people are going to be evicted, but I'm going to stop it because I'll do it myself if I have to," Trump told reporters.

It is unclear what sort of unilateral steps Trump can take without input from Congress.

Treasury Secretary Steve Mnuchin and White House chief of staff Mark Meadows on Monday continued to work with top congressional Democrats to reach a deal on coronavirus aid. Mnuchin said they are a "little" closer to an agreement.

Pelosi, Democrat of California, described Monday's meeting as "productive" and "moving down the track" but said that there are still differences as the parties work to "understand what the needs are".

Expanded unemployment benefits of $600 a week as well as a stay in evictions from federally financed housing for millions of Americans expired last week after the House, Senate and White House were unable to reach a deal.