WORLD Trump says 'distancing' to continue for a month

Trump says 'distancing' to continue for a month 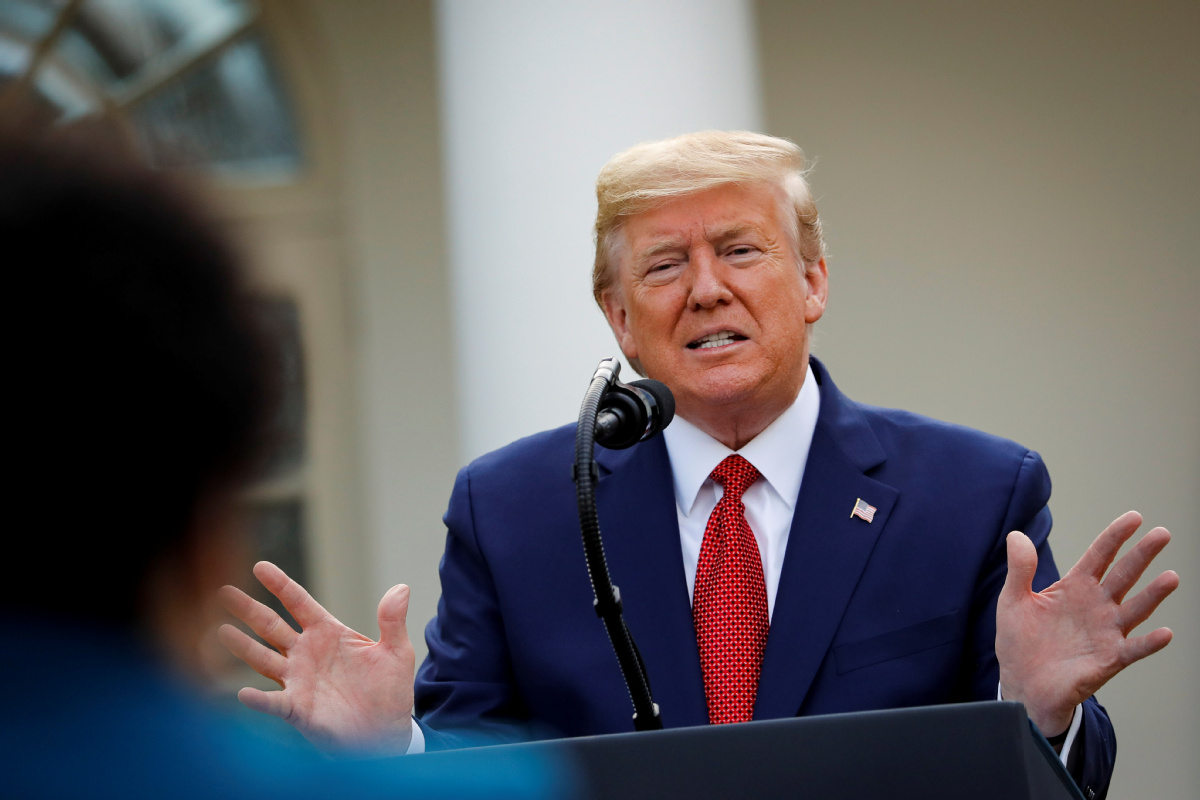 US President Donald Trump speaks during a news conference in the Rose Garden of the White House in Washington, US, March 29, 2020. (Photo: Agencies)

US President Donald Trump has extended emergency recommendations for the entire country until April 30, as his top infectious diseases scientist warned up to 200,000 people could die from the novel coronavirus pneumonia outbreak in the United States.

At a White House news conference on Sunday, Trump said he was extending the government's "social distancing" guidelines to slow the spread of COVID-19. The reassessment by Trump, who had previously said he wanted the country back to work in mid-April, came as the novel coronavirus has infected more than 140,000 in the US and left more than 2,500 dead.

A sharp escalation of COVID-19 has hit the US with explosive force in recent days and weeks, following a path seen earlier in parts of Asia and Europe. It took a month for the US to move from its first confirmed death, on Feb 29, to its 1,000th. But in two days this week that number doubled, to over 2,500 on Sunday. The case total of 143,025－as tallied by Johns Hopkins University－is the world's highest.

Trump warned that the crisis in the US would continue to get worse for some time.

"The modeling estimates that the peak in death rate is likely to hit in two weeks," he said, adding that "nothing would be worse than declaring victory before the victory is won".

The president was speaking after Anthony Fauci, who leads research into infectious diseases at the National Institutes of Health, said he believed 100,000 to 200,000 US citizens could die from the disease, and millions could be infected.

But at a later news briefing, Fauci softened his tone, saying they were based on models that were run to show the worst-case scenario if people in the US did not follow stay-athome directives.

"We feel the mitigation we are doing right now is having an effect," Fauci said. "The decision to extend this mitigation process until the end of April is a wise and prudent decision."

In the 24 hours before Fauci delivered his dire prediction, Trump backed away from his proposed quarantine of the three states surrounding the US epicenter in New York City: New York, New Jersey and Connecticut, which account for about half of all coronavirus cases and deaths in the US.

Critics promptly called the idea unworkable, saying it would cause chaos in a region that serves as the economic engine of the eastern US, accounting for 10 percent of the population and 12 percent of GDP.

"If you started walling off areas all across the country, it would be totally bizarre, counterproductive, anti-American, anti-social," New York state Governor Andrew Cuomo said on CNN, also calling it "a declaration of war on states".

Trump backtracked on the idea, saying on Twitter that "a quarantine will not be necessary".

Instead, the US Centers for Disease Control and Prevention issued a "strong advisory" on Saturday asking residents of the three states to "refrain from nonessential domestic travel for 14 days effective immediately".

New York City has recorded 728 deaths so far. Officials continued to sound the alarm over medical shortages, with some bemoaning a system that has states competing for desperately needed supplies.

He said he had made a direct request to Trump and the US military "to find us immediately more military medical personnel and get them here by next Sunday".

De Blasio said, "We're talking about a sharp escalation ahead."

On Sunday, a commercial aircraft carrying 80 tons of gloves, masks, gowns and other medical supplies from Shanghai touched down in New York, the first of 22 scheduled flights that White House officials say will funnel much-needed supplies to the US by early April.

As state and local official described increasingly desperate supply shortages in hospitals, Trump accused hospitals of hoarding ventilators that are in scarce supply across the country, adding any hospitals not using the devices must release them.

Also on Sunday, Trump said many hospitals and laboratories nationwide are stepping up development of treatments for COVID-19 patients, including experiments on the antimalarial drug hydroxychloroquine and a blood-related therapy.

Trump said that hydroxychloroquine is being administered to 1,100 patients in New York.

The US Food and Drug Administration is also allowing the emergency use of a therapy called convalescent plasma, as an experimental treatment for seriously ill patients, Trump added.

The therapy involves taking blood plasma from people who have recovered from COVID-19. New sick patients will be transfused with the plasma to boost their immune systems, Trump said, adding that the early results are good.

Convalescent plasma that contains antibodies to the novel coronavirus may be effective against the infection, the FDA said in a news release.