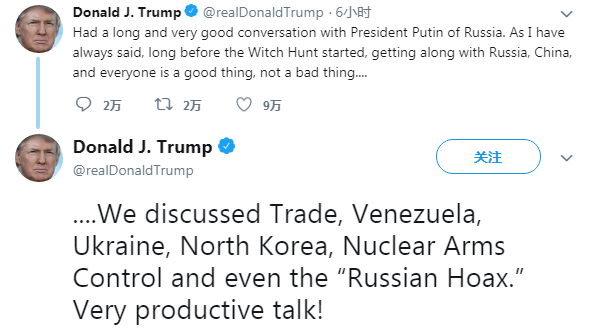 US President Donald Trump said on Friday that he has had a "very productive" talk with his Russian counterpart Vladimir Putin on a lot of issues.

Trump tweeted that he "had a long and very good conversation with President Putin of Russia. As I have always said, long before the Witch Hunt started, getting along with Russia, China, and everyone is a good thing, not a bad thing."

White House spokeswoman Sarah Sanders earlier on the same day told reporters that Trump and Putin had spoken for more than an hour on a new nuclear accord, and the situation in Venezuela and Ukraine.

The Russian media quoted the Kremlin as saying that "the parties agreed to continue contacts at various levels."

It added that Putin "stressed that the new leadership in Kiev needed to make real steps to implement the Minsk accords, which are key to resolving Ukraine's internal conflict."

Putin and Trump held a full-fledged meeting in Helsinki in July 2018, and they talked briefly in Paris in November that year.

But Trump canceled a formal meeting with Putin in Buenos Aires in December last year, citing mounting tensions between Russia and Ukraine.