WORLD Trump says he would back bills on immigration

Trump says he would back bills on immigration 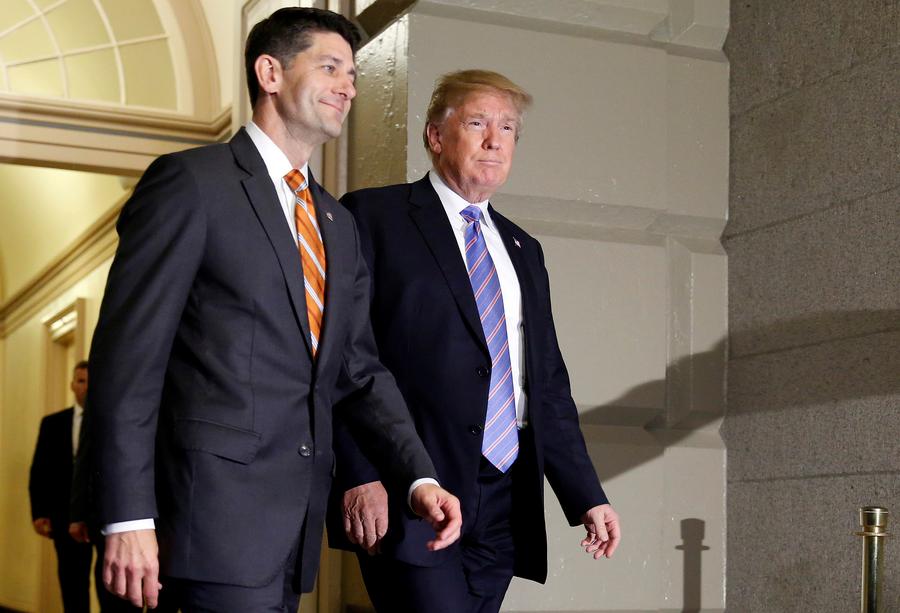 US President Donald Trump walks with Speaker of the House Paul Ryan (R-WI) as they arrive to address a closed House Republican Conference meeting on Capitol Hill, in Washington, US, June 19, 2018. (REUTERS)

WASHINGTON - US President Donald Trump told Republican lawmakers on Tuesday he would back either of the immigration bills making their way through the House of Representatives, as the controversy grew over his administration's separation of immigrant parents and children at the US-Mexico border.

Representative Mark Meadows said Trump told Republican members of the House at a meeting on Capitol Hill that they needed to get something done on immigration "right away".

In the meeting, Trump said separating families was "certainly not an attractive thing and does look bad", added Representative Tom Cole.

A Reuters/Ipsos national opinion poll released on Tuesday showed fewer than 1 in 3 American adults support the policy. The June 16-19 poll found that 28 percent of people polled supported the policy, while 57 percent opposed it and the remaining 15 percent said they did not know.

Trump, who has made a tough stance on immigration a centerpiece of his presidency, has staunchly defended his administration's actions. He has cast blame for the family separations on Democrats, although his fellow Republicans control both chambers in Congress and his own administration implemented the current policy of strict adherence to immigration laws.

The president has sought to link an end to the family separations to passage of a wider bill on immigration, which would include funding for his long-sought border wall with Mexico, prompting Democrats to accuse him of using children as hostages.

Earlier on Tuesday, the president tried again to blame Democrats for what he called "loopholes" in the law that require families detained for entering the country illegally either to be separated or released.