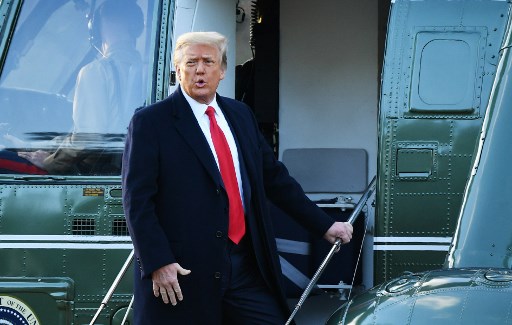 Former US president Donald Trump announced Sunday that he had hired two new lawyers to head his defense team for his historic second impeachment trial.

Trump's announcement came the day after US media reported that several of his impeachment lawyers had left his team, a little more than a week shy of his trial before the US Senate.

Castor has focused on criminal law throughout his career, while Schoen specializes in "civil rights litigation in Alabama and federal criminal defense work, including white collar and other complex cases, in New York."

Trump, who left office January 20, faces trial on a charge that he incited the mob that stormed the US Capitol building in an effort to block his election loss to President Joe Biden.

The trial is historic both because it stems from Trump being impeached a second time during his four years in the White House, and is the first of a former United States president.

Schoen had already been working with the defense team, and both he and Castor "agree that this impeachment is unconstitutional," the statement said.

CNN had cited unnamed sources as saying that five lawyers -- including two who were thought to be leading the team -- had parted ways with the Republican billionaire after disagreeing over his legal strategy.

Trump had wanted the lawyers to continue his baseless claims of mass election fraud rather than focus on the legality of convicting a president after he has left office, CNN said, adding that he was "not receptive" to discussion.

The former president has reportedly been struggling to form a defense ahead of his historic trial, facing new hurdles with just days to go.

The trial -- in which Trump faces a charge of "incitement of insurrection" -- is to begin on February 9.

But with just five Republicans joining all 50 Democrats this week in agreeing that the trial should go forward, it appears unlikely that 17 Republicans would vote against Trump, the minimum number needed to reach the two-thirds threshold for conviction.