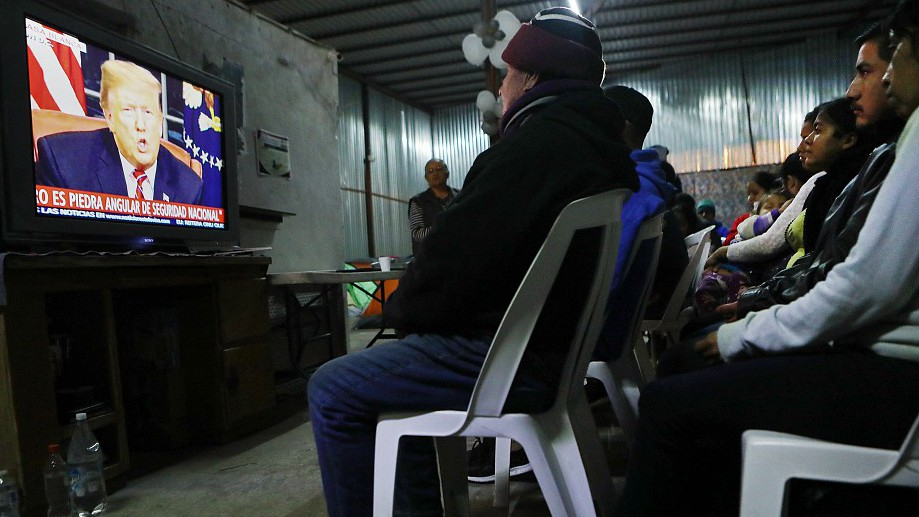 Migrants view a live televised speech by US President Donald Trump on border security at a shelter for migrants on January 8, 2019 in Tijuana, Mexico. (Photo: VCG)

US President Donald Trump, facing renewed criticism from Democrats and activists over his handling of a migrant crisis on the US-Mexico border, said in a Twitter post on Wednesday that immigrants unhappy with conditions at detention centers should be told "not to come."

Democratic lawmakers and civil rights activists who have visited migrant detention centers along the border in recent days have described nightmarish conditions marked by overcrowding and inadequate access to food, water and other basic needs.

The Department of Homeland Security's inspector general on Tuesday published photos of migrant-holding centers in Texas' Rio Grande Valley crammed with twice as many people as they were meant to hold.

"If Illegal Immigrants are unhappy with the conditions in the quickly built or refitted detentions centers, just tell them not to come. All problems solved!" Trump said on Twitter.

Trump has made cracking down on illegal immigration a key part of his first-term agenda after campaigning on the issue ahead of the 2016 election.

"Our Border Patrol people are not hospital workers, doctors or nurses," Trump wrote earlier on Twitter. "Great job by Border Patrol, above and beyond. Many of these illegals (sic) aliens are living far better now than where they ... came from, and in far safer conditions."

The White House on Wednesday sharply criticized a ruling by a federal judge in Seattle who blocked its attempt to keep thousands of asylum seekers in custody while they pursued their cases.

"The decision only incentivizes smugglers and traffickers, which will lead to the further overwhelming of our immigration system by illegal aliens," White House press secretary Stephanie Grisham said in a statement.

US Congress has blocked Trump's efforts to fund construction of a wall on the southern border, and a three-judge panel of the 9th US Circuit Court of Appeals in San Francisco refused on Wednesday to lift an injunction barring the administration from using 2.5 billion US dollars intended to fight narcotics trafficking to build the barrier.

"Congress did not appropriate money to build the border barriers defendants seek to build here, " the panel said, adding "Congress presumably decided such construction at this time was not in the public interest. ... It is not for us to reach a different conclusion. "

Trump has been unsuccessful in persuading Congress to fund the wall. In February, he declared a national emergency, saying that would entitle the administration to reprogram 6.7 billion US dollars in funds Congress had allocated for other purposes to build the wall.

Several states including California and organizations including the Sierra Club and the Southern Border Communities Coalition, challenged the administration decision in two lawsuits.