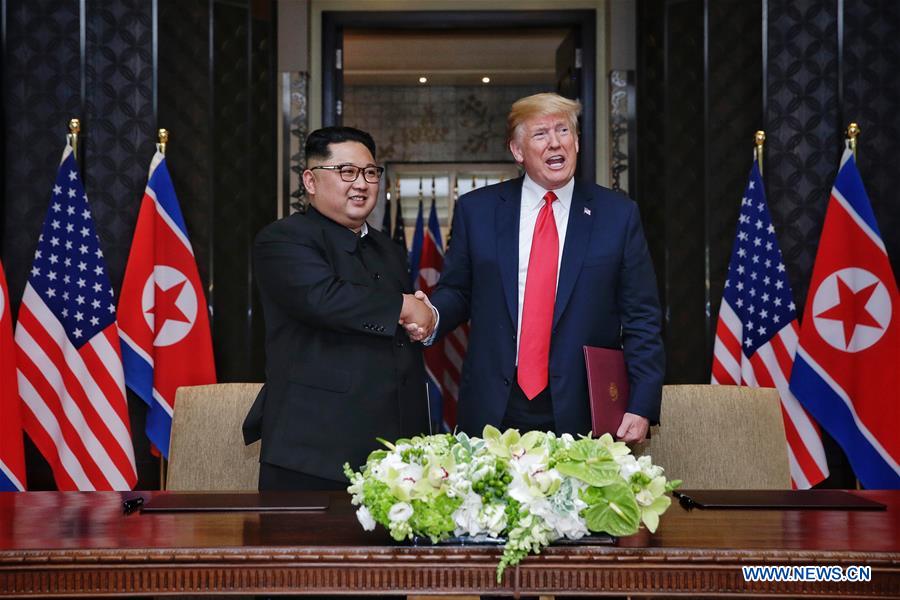 WASHINGTON, Dec. 1 (Xinhua) -- US President Donald Trump reportedly said on Saturday on his way back here that his second meeting with the top leader of the Democratic People's Republic of Korea (DPRK), Kim Jong Un, is likely to happen in January or February next year.

According to several Western media outlets, Trump told them aboard Air Force One after attending the Group of 20 (G20) summit that the meeting would occur early in 2019.

Three sites are being considered, he added.

Trump was also quoted as saying that at some point, he would invite Kim to the United States.

Earlier on Friday, while meeting with his South Korean counterpart Moon Jae-in, Trump discussed his intention to hold a second US-DPRK summit, and restated with Moon a common commitment to work closely together on making it happen.

Trump also met with Japanese Prime Minister Shinzo Abe on Friday. They reviewed the recent developments related to the DPRK and discussed how best to work with the international community, including South Korea, to continue to put pressure on the DPRK until it implements its commitment to denuclearize.

After Trump and Kim met in Singapore in June, negotiations between Washington and Pyongyang have stalled due to differences on the scale of denuclearization, US sanctions, and whether to issue a war-ending declaration, among others.

On Nov. 7, the State Department announced that Secretary of State Mike Pompeo's meeting with Kim Yong Chol, vice chairman of the ruling Workers' Party of Korea Central Committee, which had been scheduled in New York for Nov. 8, would "take place at a later date."

Trump said earlier in October that his meeting with Kim would be held after the midterm Congressional elections, and the venue of his second meeting with Kim had been narrowed down to "three or four" locations.