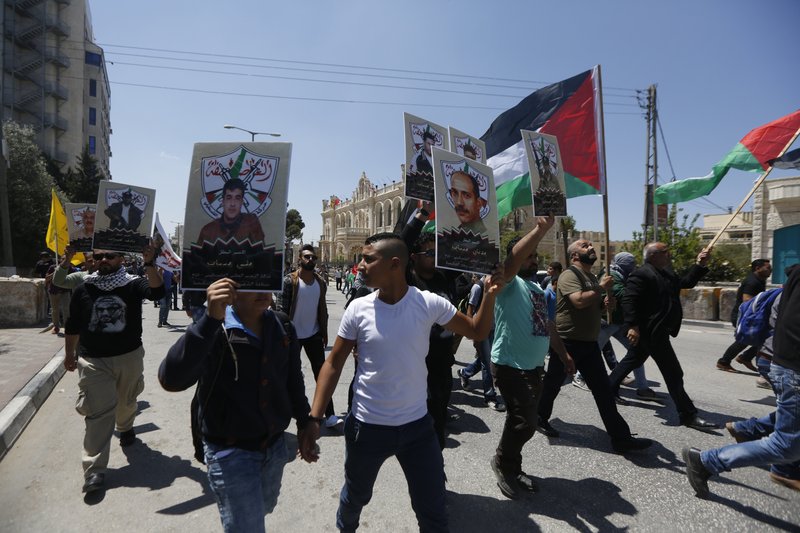 People hold posters of imprisoned during a rally in support of Palestinian prisoners in the West bank City of Bethlehem, Monday, April 17, 2017. (Photo: AP)

WASHINGTON, Jan. 27 (Xinhua) -- U.S. President Donald Trump said on Monday that he will release the long-awaited political aspect of the Middle East peace plan on Tuesday, a proposal that has already been rejected repeatedly by the Palestinians.

"We're going to be announcing a plan tomorrow at 12 o'clock," Trump told reporters at the White House before his meeting with visiting Israeli Prime Minister Benjamin Netanyahu.

"That's a plan that Bibi (Netanyahu) and his opponent, I must say, have to like very much," added Trump, referring to Netanyahu with his nickname.

Trump is also scheduled to meet with Benny Gantz, Netanyahu's main political rival, at the White House later in the day.

The Trump administration has postponed several times the publication of its "Deal of the Century" for peace between the Israelis and the Palestinians. The economic portion of the plan was unveiled last June at a convention in Bahrain which was boycotted by the Palestinians.

The Palestinians have criticized the U.S. plan as very favorable to the right-wing Israeli government and refused any participation in it.

"The International community should reject to be a partner in the conspiracy of the American 'Deal of the Century'," he told the Palestinian Authority (PA) at a weekly cabinet meeting held in Ramallah.

Acknowledging the Palestinians' total rejection, Trump on Monday still expressed optimism for the prospect of the plan. "They probably won't want it initially, but I think in the end they will," Trump said.

The expected announcement of the plan comes as the Israeli prime minister has been indicted on corruption charges. Netanyahu's request for immunity from trial is supposed to be discussed at the Israeli parliament at the same time when he is traveling to Washington.