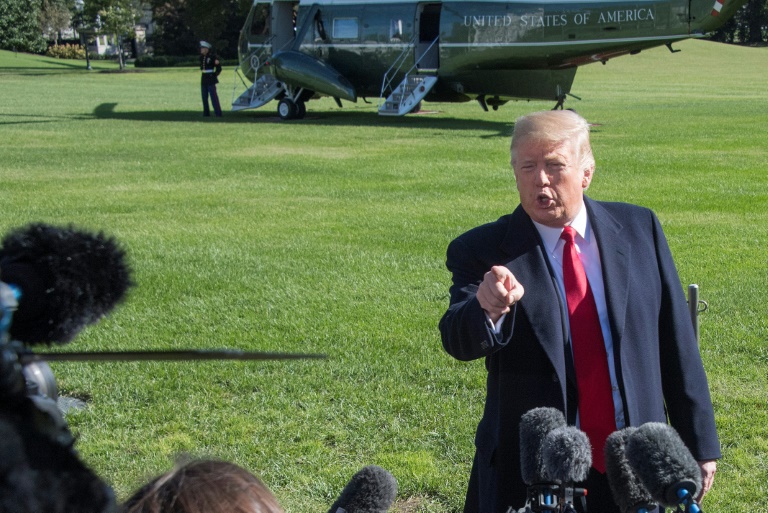 "Until people come to their senses, we will build it up," said President Donald Trump (Photo: AFP)

President Donald Trump said Monday the United States is ready to build up its nuclear arsenal after announcing it is abandoning a Cold War-era nuclear treaty, as Russia warned the withdrawal could cripple global security.

In explaining his decision, Trump told reporters in Washington that Russia had "not adhered to the spirit of that agreement or to the agreement itself."

"Until people come to their senses, we will build it up," he said, referring to America's nuclear stockpile. "This should have been done years ago."

Russia however has warned that abandoning the agreement would be a major blow to global security.

Moscow was ready to work with the United States to salvage the agreement, the Russian Security Council said after a meeting between its chief Nikolai Patrushev and US National Security Advisor John Bolton.

Bolton, who is expected to meet Russian President Vladimir Putin Tuesday, was visiting Moscow in the wake of Trump's announcement Saturday that he wants to do away with the pact that bans intermediate-range nuclear and conventional missiles.

On Monday, Bolton discussed the fate of the treaty with Foreign Minister Sergei Lavrov and spent "nearly five hours" in talks with Russian Security Council chief Nikolai Patrushev, a spokesman for the council told AFP.

Speaking after his meeting with Patrushev, Bolton said the Russians had insisted that Moscow did not violate the treaty.

"You can't bring somebody into compliance who does not think they are in breach," he said, adding the treaty seems to have run its course.

The two men also discussed a possible extension by five years of the New START arms control treaty, which expires in 2021, the Security Council said.

The Russian foreign ministry released a picture of Lavrov talking to a grinning Bolton, and said the two men discussed bilateral cooperation, the fight against terror, and "maintaining strategic stability."

Putin's spokesman Dmitry Peskov rejected claims that Moscow has violated the pact, instead accusing Washington of doing so, and called Bolton's upcoming meeting with Putin important.

"There are more questions than answers," he told journalists.

Trump's announcement has raised global concerns, with the European Commission urging the United States and Russia to pursue talks to preserve the treaty and China calling on Washington to "think twice."

"The US and the Russian Federation need to remain in a constructive dialogue to preserve this treaty and ensure it is fully and verifiably implemented," said Maja Kocijancic, the EU spokeswoman for foreign affairs and security policy.

Chinese foreign ministry spokeswoman Hua Chunying said a unilateral withdrawal from the treaty "will have a multitude of negative effects."

Bolton, however, said Britain, Japan, and a number of other countries supported the US position.

Analysts have warned that the latest rift between Moscow and Washington could have lamentable consequences, dragging Russia into a new arms race.

Putin last week raised eyebrows by saying Russians would "go to heaven" in the event of nuclear war and that Moscow would not use nuclear weapons first.

"The aggressor will have to understand that retaliation is inevitable, that it will be destroyed and that we, as victims of aggression, as martyrs, will go to heaven," he said.

"They will simply croak because they won't even have time to repent."

The Trump administration has complained of Moscow's deployment of Novator 9M729 missiles, which Washington says fall under the treaty's ban on missiles that can travel distances of between 310 and 3,400 miles (500 and 5,500 kilometers).

US-Russia ties are under deep strain over accusations Moscow meddled in the 2016 US presidential election. The two states are also at odds over Russian support for Bashar al-Assad's regime in Syria's civil war, and the conflict in Ukraine.

Putin and Trump will both be in Paris on November 11 to attend commemorations marking 100 years since the end of World War I.