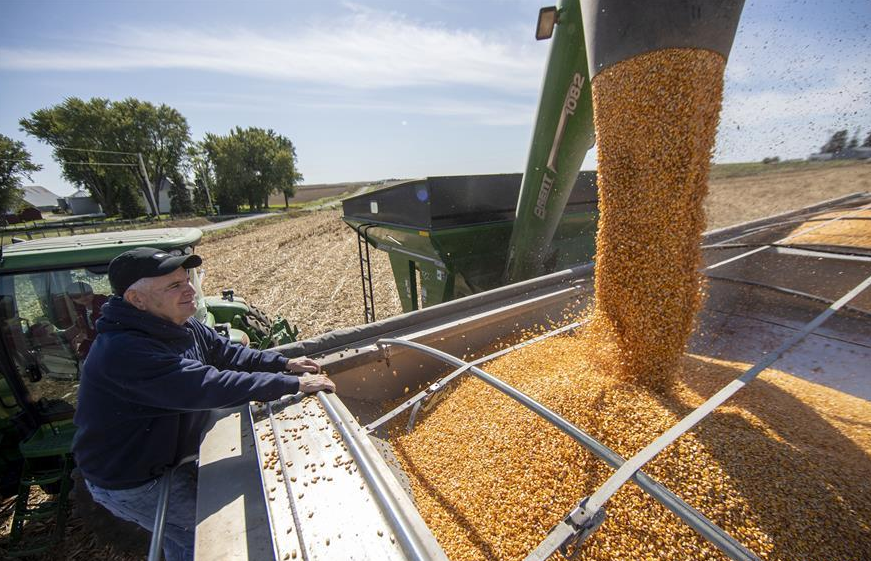 WASHINGTON, May 9 (Xinhua) -- The United States will purchase 3 billion dollars worth of dairy, meat and produce from farmers and ranchers starting early next week, President Donald Trump announced on Saturday.

"The USA will be purchasing, from our farmers, ranchers & specialty crop growers, 3 billion dollars worth of dairy, meat & produce for food lines & kitchens," Trump said in a tweet Saturday afternoon.

The US president noted that the government purchase is part of the "Farmers to Family Food Box," calling it "great news for all."

Demands for agricultural products have plummeted amid the COVID-19 outbreak, as widespread lockdowns since late March disrupted supply chains across the nation, even forcing some farmers to destroy their products that can't be stored.

Some of the country's largest slaughterhouses have closed due to growing infections among workers at certain facilities, presenting additional challenges for farmers. Trump has recently signed an executive order to keep meat-processing plants open, but it has drawn backlash from the country's largest meatpacking union.

The United Food and Commercial Workers (UFCW) International Union on Friday announced its opposition to the re-opening of 14 meatpacking plants under the recent executive order, raising concerns about the serious safety issues at these facilities that put workers and the food supply at risk.

Meanwhile, farmers and ranchers have been devastated by the COVID-19 crisis, with year-on-year farm bankruptcies increasing 23 percent, according to the American Farm Bureau Federation, which cited recently released data from US courts.

Wisconsin was the hardest hit with 78 filings in the 12-month period, followed by Nebraska with 41 filings and Iowa at 37, the American Farm Bureau Federation noted. More than 50 percent of the filings were in the 13-state Midwest region, followed by 19 percent in the Southeast.

The US president recently announced a 19-billion-US-dollar relief program to help farmers and ranchers hurt by the COVID-19 pandemic, with 3 billion dollars in purchases of fresh produce, dairy and meat for distribution at food banks.

The coronavirus food assistance program will also provide 16 billion dollars in direct support based on actual losses for agricultural producers where prices and market supply chains have been impacted by the pandemic, according to the US Department of Agriculture.