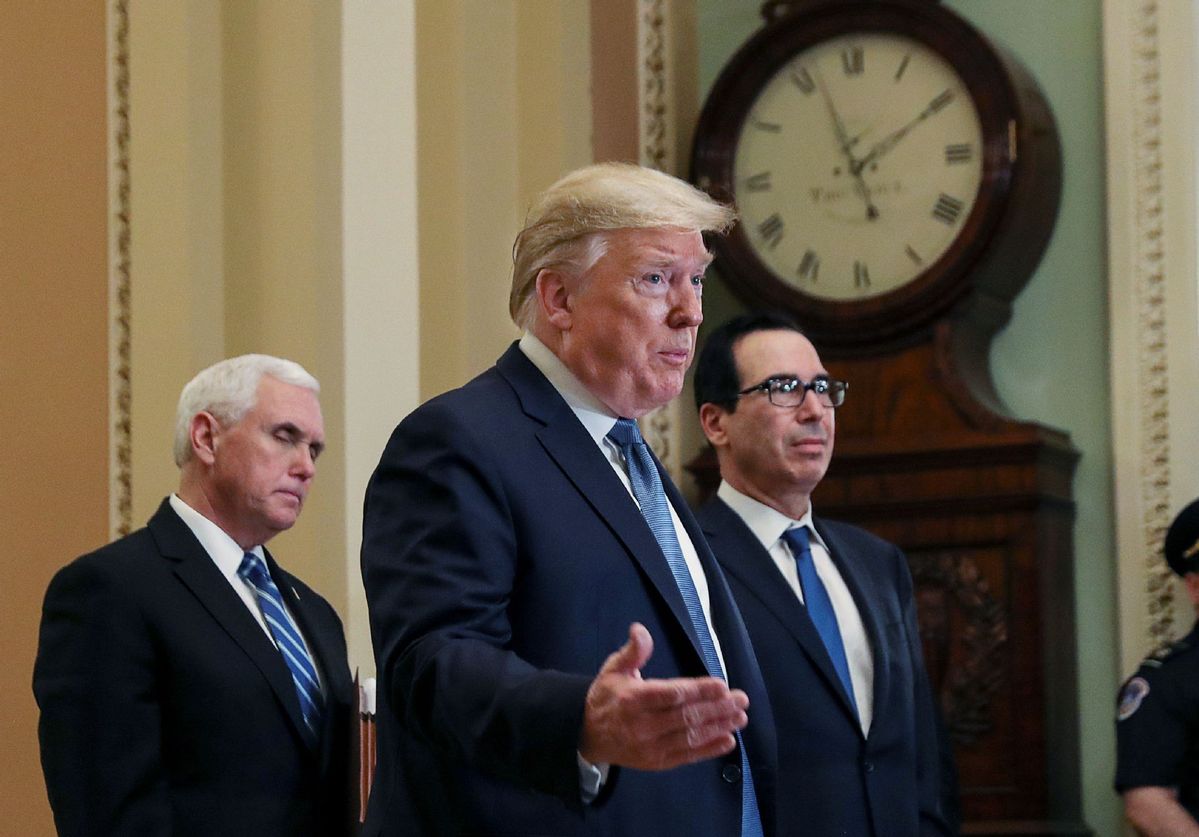 US President Donald Trump is flanked by Vice President Mike Pence and Treasury Secretary Steven Mnuchin as he speaks to members of the news media following a closed Senate Republican policy lunch meeting to discuss the response to the coronavirus outbreak with senators on Capitol Hill in Washington, US, March 10, 2020. (Photo: Agencies)

US President Donald Trump pushed for economic stimulus measures on Capitol Hill on Tuesday and played down the risks from the coronavirus as the contagion has sickened at least 900 people in the country and prompted two presidential contenders to cancel their rallies.

Details were scant by Tuesday night on Trump's relief plan, including how his proposed payroll-tax break was received by Congress, where he went for a closed-door lunch meeting.

"We had a good reception on Capitol Hill. We're going to be working with Republican and Democratic leadership to move a legislative package," Vice-President Mike Pence, who is heading the White House's coronavirus task force, told a White House briefing Tuesday afternoon.

Pence defended the federal government's response to coronavirus testing, saying that "a million tests are in the field". He added that more would be added as the government partnered with private companies.

Insurance companies have agreed to waive co-payment charges for people seeking virus tests, and extend coverage for coronavirus treatment in all of their benefit plans, according to a White House statement on Trump and Pence's coronavirus briefing with health insurers Tuesday morning.

Pence also said that federal authorities would unveil recommendations in the next 24 hours to help halt the spread of coronavirus in the four hardest-hit states.

"In the next 24 hours, we will be working with not only Washington state, but California, with New York and Florida and unveiling our recommendations – CDC's recommendations," he said.

Trump said a day before he expected to meet with House Republicans discussing a possible "very substantial" payroll-tax cut or relief, about helping hourly wage-earners, as well as companies "so that they don't get penalized for something that's not their fault".

But his proposed payroll-tax break met with bipartisan resistance. Trump's GOP allies have been cool to additional spending at this stage, especially for cutting taxes that would have to be reimposed presumably after the November election, while Democrats prefer their own package of remedies, including low or no-cost virus testing, The Associated Press reported.

Senate Democratic leader Chuck Schumer said Tuesday night that the Trump administration seems to believe that the answer to any problem is a tax cut.

"This is a HEALTH CARE crisis. It demands a HEALTH CARE solution. The best way to ensure economic security for the American people is to deal with the coronavirus itself," the New York senator tweeted.

Almost three-quarters of US states have reported coronavirus infections, with almost 1,000 cases in the United States and at least 28 deaths, according to American media reports.

"We're taking this unbelievably seriously, and I think we're doing a really good job," Trump said after his meeting at the Capitol. "And it will go away. Just stay calm."

But out of concern over the coronavirus rapidly spreading in the US, former vice-president Joe Biden and Senator Bernie Sanders canceled their rallies scheduled for Tuesday night in Ohio. The campaigns of the two Democratic presidential contenders said their future events will be contingent on how the epidemic develops.