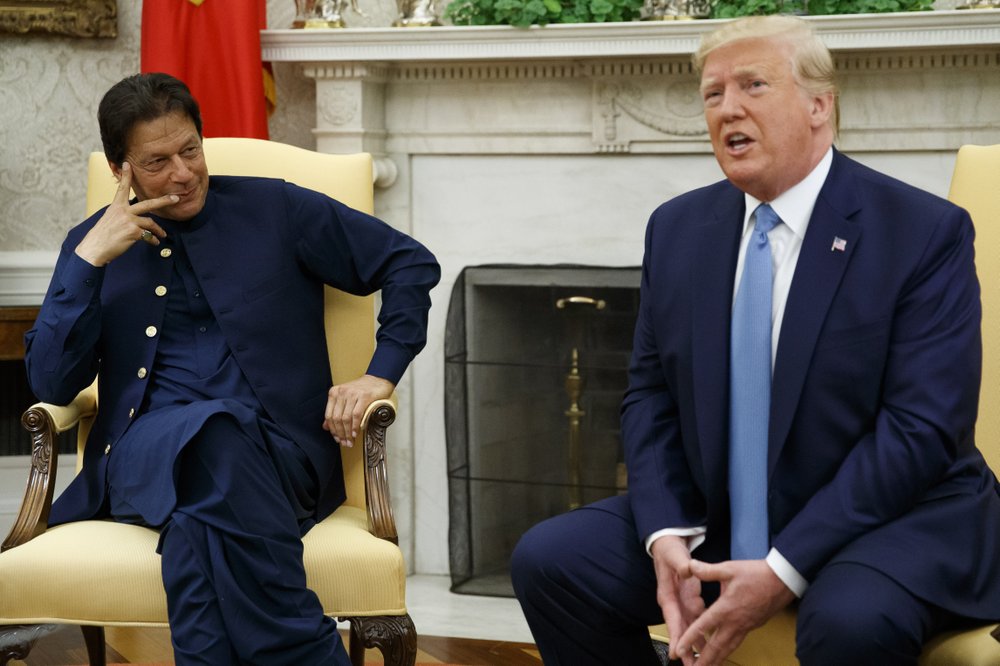 US President Donald Trump speaks during a meeting with Pakistani Prime Minister Imran Khan in the Oval Office of the White House, July 22, 2019, in Washington. (Photo: AP)

US President Donald Trump claimed Monday he could end the nearly two-decade-old war in Afghanistan in a matter of days but that it would kill millions of people and wipe the country “off the face of the earth.”

The president made the statement at the White House as he praised Pakistan Prime Minister Imran Khan and sought his help in negotiating a peace deal in neighboring Afghanistan.

“I could win that war in a week. I just don’t want to kill 10 million people,” Trump told reporters in the Oval Office. “If I wanted to win that war, Afghanistan would be wiped off the face of the earth. It would be gone. It would be over, literally, in 10 days.”

Warming up to Khan marked a turnaround for Trump, who has been sharply critical of Pakistan and now hopes Khan’s government will use its influence with the Taliban to advance a peace deal and help the U.S. withdraw from the war.

The war began when the U.S. went after al-Qaida leader Osama bin Laden and his Taliban supporters in Afghanistan following the Sept. 11, 2001, attacks. Sitting alongside Khan, Trump said he wanted a peaceful resolution. “So we’re working with Pakistan and others to extricate ourselves,” he said.

The pleasantries in the Oval Office were an abrupt change from when Trump cut millions of dollars in aid to Pakistan, saying the only thing it offered the United States was “lies” and “deceit.”

Khan has bashed Trump too, but now says Pakistan is also eager to work to end the war. The U.S. wants Pakistan to use its leverage to get the Taliban to agree to a ceasefire, negotiate with the Afghan government and stop harboring militant groups.

Sen. Lindsey Graham, R-S.C., who sat in on the meeting, said, “Peace with honor and dignity in Afghanistan is only possible with the complete buy-in of Pakistan.”

“If the Taliban are denied sanctuary in Pakistan, this war will end quickly and on our terms,” Graham said, adding that he thinks Pakistan’s leaders are ready for change. “It is my hope that we can negotiate a free trade agreement between the United States and Pakistan, which would be of mutual economic benefit and an incentive to maintain stability in the region.”

U.S. envoy Zalmay Khalilzad has been holding talks with the Taliban for months, but so far the militant group has refused to talk directly to the Afghan government and Taliban attacks have continued. Khalilzad leaves Tuesday on a nearly two-week trip to Afghanistan, where he will confer with members of the Afghan government, and later Qatar, where he will resume talks with the Taliban.

“It’s the closest we’ve been to a peace deal,” Khan told Trump. “And I hope in the coming days we will be able to urge the Taliban to speak to the Afghan government and come to a political solution.”

Trump’s casual comments about wiping Afghanistan off the map will likely unsettle Afghans, who have fought against the Taliban alongside their U.S. and NATO partners for years. Afghans also are wary of Pakistan’s involvement in their country’s future. For years, the Afghans have accused Pakistan of creating instability in their country by giving militants a safe place from which to stage attacks across the two countries long, porous border.

As the war has dragged on, relations between the U.S. and Pakistan have gone up and down.

They reached rock bottom under former President Barack Obama when the U.S. carried out the raid on bin Laden’s compound in Pakistan without giving Islamabad a heads-up. The relationship didn’t improve when Trump took office.

In January 2018, Trump tweeted: “The United States has foolishly given Pakistan more than 33 billion dollars in aid over the last 15 years, and they have given us nothing but lies & deceit, thinking of our leaders as fools. They give safe haven to the terrorists we hunt in Afghanistan, with little help.”

Khan, the former captain of the Pakistani cricket team who assumed office last fall, has fired back.

He tweeted that Pakistan has suffered 75,000 casualties and lost $123 billion in the “US War on Terror,” despite the fact that no Pakistanis were involved in the Sept. 11 attacks. He says the U.S. has only provided a “minuscule” $20 billion in aid.

Now, both countries say they want to smooth tensions.

In a sign he means business, Khan traveled to Washington with Pakistan’s top military official and the head of the country’s powerful Inter-Services Intelligence agency, or ISI, which has a long history of connections to militant groups.

Before he arrived, Pakistan arrested a radical cleric and U.S.-wanted terror suspect implicated in the 2008 attacks in Mumbai, India, that killed 166 people. The U.S. had offered a $10 million reward for Hafiz Saeed’s arrest, but for months, he lived freely in Pakistan.

Pakistan is suffering economically and wants to reset relations with the U.S. in hopes of securing investment, trade and possibly a restoration of American aid that Trump cut. “All of that can come back, depending on what we work out,” Trump said.

Beyond Afghanistan, the two discussed energy, defense and trade as well as India, an archenemy of Pakistan, and Islamabad’s cozy relations with China.

They said they also would discuss a U.S. demand that Pakistan release Dr. Shakil Afridi, a doctor who ran a fake vaccination campaign to help the CIA confirm the whereabouts of bin Laden and kill him in a May 2011 raid that the U.S. carried out without first informing the Pakistani government.

Trump also said that when he met recently with Indian Prime Minister Narendra Modi, he was asked if he would like to mediate a dispute between India and Pakistan over Himalayan territory of Kashmir.

Raveesh Kumar, a spokesman for India’s Ministry of External Affairs, tweeted afterward that “no such request has been made by the prime minister” and that all issues with Pakistan are discussed only bilaterally.