The Trump administration on Friday set up new obstacles for women seeking abortions, barring taxpayer-funded family planning clinics from making abortion referrals. The new policy is certain to be challenged in court. 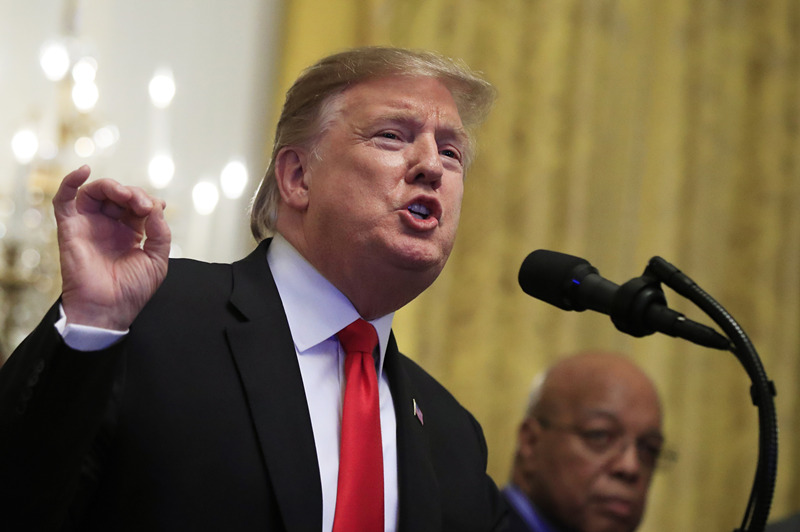 The final rule released Friday by the Health and Human Services Department also would prohibit federally funded family planning clinics from being housed in the same locations as abortion providers, and require stricter financial separation.

Clinic staff would still be permitted to discuss abortion with clients, along with other options. However, that would no longer be required.

The move is the latest in a series of Trump administration efforts to remake government policy on reproductive health. The American Medical Association warned it could have an impact far beyond abortion, potentially affecting access to health care services now provided to low-income women by the clinics, including birth control, cancer screenings, and testing and treatment for sexually transmitted diseases. By law, the family planning program does not pay for abortions.

"This is the wrong prescription and threatens to compound a health equity deficit in this nation," AMA president Barbara L. McAneny said in a statement. "Women should have access to these medical services regardless of where they live, how much money they make, their background, or whether they have health insurance."

It could be some time before women served by the federal family program feel the full impact. Women's groups, organizations representing the clinics, and Democratic-led states are expected to sue to block the policy from going into effect. Administration officials told abortion opponents on a call Friday that they expect legal action, according to a participant.

Abortion is a legal medical procedure, but federal laws prohibit the use of taxpayer funds to pay for abortions except in cases of rape, incest, or to save the life of the woman.

Planned Parenthood, whose affiliates are major providers of family planning services as well as abortions, said the administration is trying to impose a "gag rule," and launched a full campaign to block it. Congressional supporters of the organization said it receives about $60 million a year from the federal program.

"I want our patients to know this — we will fight through every avenue so this illegal, unethical rule never goes into effect," said Planned Parenthood's president, Dr. Leana Wen.

She said the new policy would prevent doctors from referring women for abortions "even if your life depended on it."

Planned Parenthood and other groups representing the clinics say the new requirements for physical separation of facilities would be costly and all but impossible to fulfill. Planned Parenthood said the administration is making another attempt to drive it out of business, after efforts to deny funding failed in Congress.

White House counselor Kellyanne Conway scoffed at that argument. "They've been saying for years they don't co-mingle their funds, so this should be easy for them," she told reporters at the White House. "Physically separate and financially separate."

Religious conservatives see the administration's action as a way to break down what they call an indirect taxpayer subsidy of abortion providers.

Tony Perkins, president of the Family Research Council, called it "a major step toward the ultimate goal of ending taxpayers' forced partnership with the abortion industry."

The regulation was published Friday on an HHS website. It's not official until it appears in the Federal Register and the department said there could be "minor editorial changes." A department official confirmed it was the final version.

Known as Title X, the family-planning program serves about 4 million women annually through independent clinics, many operated by Planned Parenthood affiliates, which serve about 40 percent of all clients. The grant program costs taxpayers about $260 million a year.

Leaders of health associations representing black and Latino health care providers and patients joined Wen at a news briefing to decry the new rule They said women from their communities make up more than half the beneficiaries of Title X grants and would be disproportionately harmed by the changes.

But abortion opponent Marjorie Dannenfelser, president of the Susan B. Anthony List, said the administration rule "does not cut family planning funding by a single dime, and instead directs tax dollars to entities that provide health care to women but do not perform abortions." Her organization is a political advocacy group that backs anti-abortion candidates.

An umbrella group that represents family planning clinics broadly, not only those affiliated with Planned Parenthood, said the administration was acting based on ideology and not in the best interests of patients.

"This rule intentionally strikes at the heart of the patient-provider relationship, inserting political ideology into a family planning visit, which will frustrate and ultimately discourage patients from seeking the health care they need," Clare Coleman, head of the National Family Planning & Reproductive Health Association, said in a statement.

Although abortion remains politically divisive, the US abortion rate has dropped significantly, from about 29 per 1,000 women of reproductive age in 1980 to about 15 in 2014. Better contraception, fewer unintended pregnancies and state restrictions may have played a role, according to a recent scientific report. Polls show most Americans do not want the Supreme Court to overturn Roe v. Wade, the 1973 ruling that legalized abortion.

The Trump administration's policy echoes a Reagan-era regulation that barred clinics from even discussing abortion with women. It never went into effect as written, although the Supreme Court ruled it was an appropriate use of executive power.

The policy was rescinded under President Bill Clinton, and a new rule took effect requiring "nondirective" counseling to include a full range of options for women.

The Trump administration is now rolling back the Clinton requirement.