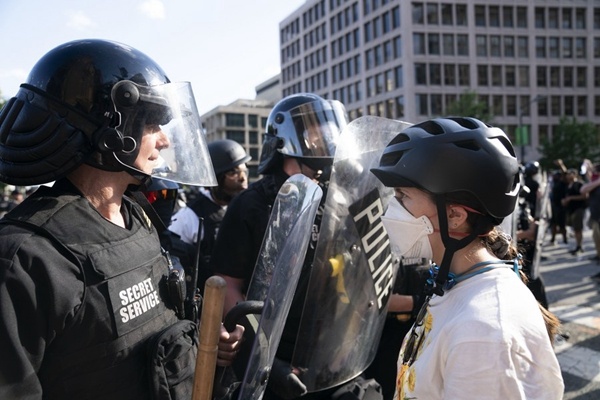 A protester confronts police near the White House during a protest over the death of George Floyd in Washington, D.C., the United States, on May 30, 2020. [Photo/Xinhua]

U.S. President Donald Trump on Tuesday signed an executive order on policing amid calls for action against police brutality and racism.

It comes three weeks after the death of George Floyd, a 46-year-old African American man, in police custody, which has triggered massive and weeks-long demonstrations.

It also said police departments must "prohibit the use of chokeholds -- a physical maneuver that restricts an individual's ability to breathe for the purposes of incapacitation -- except in those situations where the use of deadly force is allowed by law."

Trump, speaking at the White House before signing the executive order, stressed that he "strongly" opposes efforts to defund or dismantle police departments, calling the ideas "radical."

"Without police, there is chaos. Without law, there is anarchy and without safety, there is catastrophe," he said.

The move from the White House comes alongside separate efforts on Capitol Hill focused on police reforms.

The Democrat-led House introduced a bill last week that aims to ensure officers can be held accountable for misconduct and increase transparency. The GOP-led Senate is also creating its own legislative package that will focus on police reporting, accountability, training and relations.

"The president's weak executive order falls sadly and seriously short of what is required to combat the epidemic of racial injustice and police brutality that is murdering hundreds of Black Americans," the California Democrat said in a statement on Tuesday. "The executive order lacks meaningful, mandatory accountability measures to end misconduct. During this moment of national anguish, we must insist on bold change, not meekly surrender to the bare minimum."

Chuck Schumer, the Senate minority leader, said on Tuesday that Trump's executive order is not enough.

"While the president has finally acknowledged the need for policing reform, one modest executive order will not make up for his years of inflammatory rhetoric and policies designed to roll back the progress made in previous years," Schumer said in a statement.

"Unfortunately, this executive order will not deliver the comprehensive meaningful change and accountability in our nation's police departments that Americans are demanding," the New York Democrat added. "Congress needs to quickly pass strong and bold legislation with provisions that makes it easier to hold police officers accountable for abuses, and President Trump must commit to signing it into law."

Senate Majority Leader Mitch McConnell told reporters on Tuesday that he would wait until Wednesday morning to announce whether he would bring the GOP bill to the floor ahead of the two-week July 4 recess.

The Republican also said the House bill of police reform efforts is "going nowhere in the Senate," while describing it as "typical Democratic overreach."

Floyd died during an arrest in Minneapolis, Minnesota on May 25 after a white police officer kneeled on his neck for nearly nine minutes.

Protests in response to Floyd's death, and more broadly to police violence, spread across the United States and took place in some other countries.