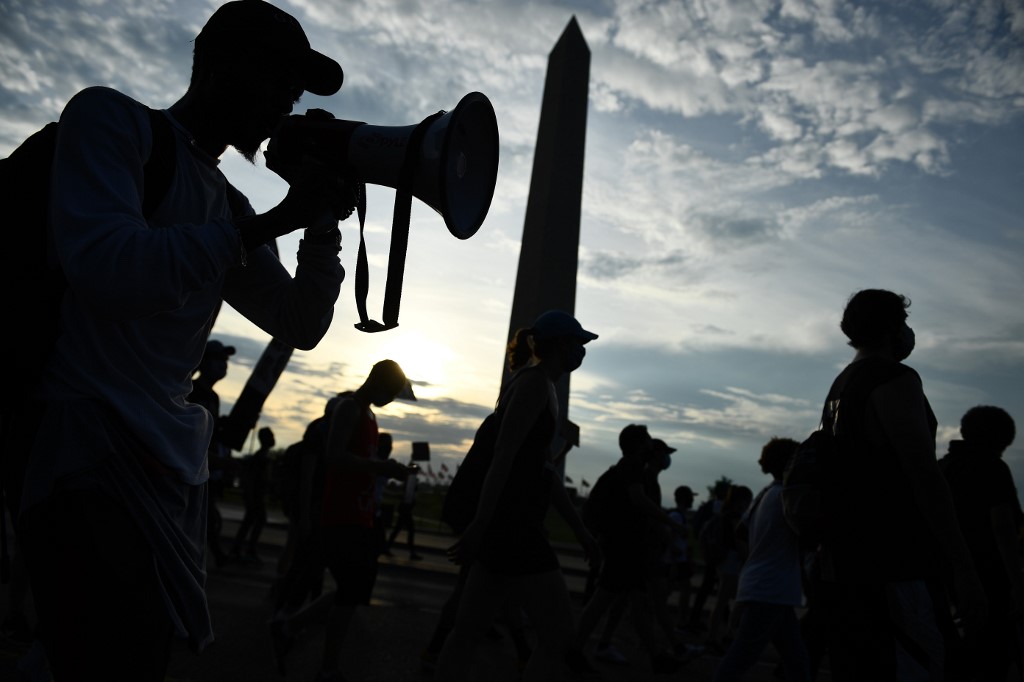 Demonstrators march by the Washington Monument as protests triggered by the death of George Floyd while in police custody, continue on June 23, 2020, in Washington, DC. (Photo: AFP)

The order enforces laws prohibiting the desecration of public monuments, the vandalism of government property, and recent acts of violence, withholds federal support tied to public spaces from state and local governments that have failed to protect public monuments, and withdraws federal grants for jurisdictions and law enforcement agencies that fail to stop their desecration, said a Fox News report.

It also provides assistance for protecting federal statues, according to the report.

Also on Friday, Attorney General Bill Barr directed the creation of a task force to counter anti-government extremists, specifically naming those who support the far-right "boogaloo" movement and left-wing radicals who identify as Antifa.

Trump said on Tuesday he would sign such an executive order, one night after police thwarted demonstrators' attempts to tear down a statue of former President Andrew Jackson near the White House.

Four hundred National Guard troops have been activated in Washington D.C. to guard monuments and infrastructure and Trump has personally instructed Interior Secretary David Bernhardt to restore the only Confederate statue in the U.S. capital city after it was torn down on June 19, local media reported.

Trump's order came as numerous controversial statues across the country have been targeted amid weeks of protests and civil unrest across the country following the death of George Floyd, a black man killed by a white police officer who held him down with a knee on his neck for nearly nine minutes a month ago.

Protesters supporting the statues' removal have said that the monuments are in memory of figures believed to be symbols of racism. Trump warned that protesters who deface statues would face up to 10 years in prison, calling them "vandals, hoodlums, anarchists and agitators."

The Veterans Memorial Preservation Act, a federal law passed in 2003, already makes it a crime to destroy or attempt to destroy a plaque, monument or statue "commemorating the service" of anyone who served in the armed forces. The law carries a penalty of up to 10 years in prison, according to a USA Today report.