President Donald Trump skipped a summit with his Southeast Asian counterparts for the third year in a row on Saturday. 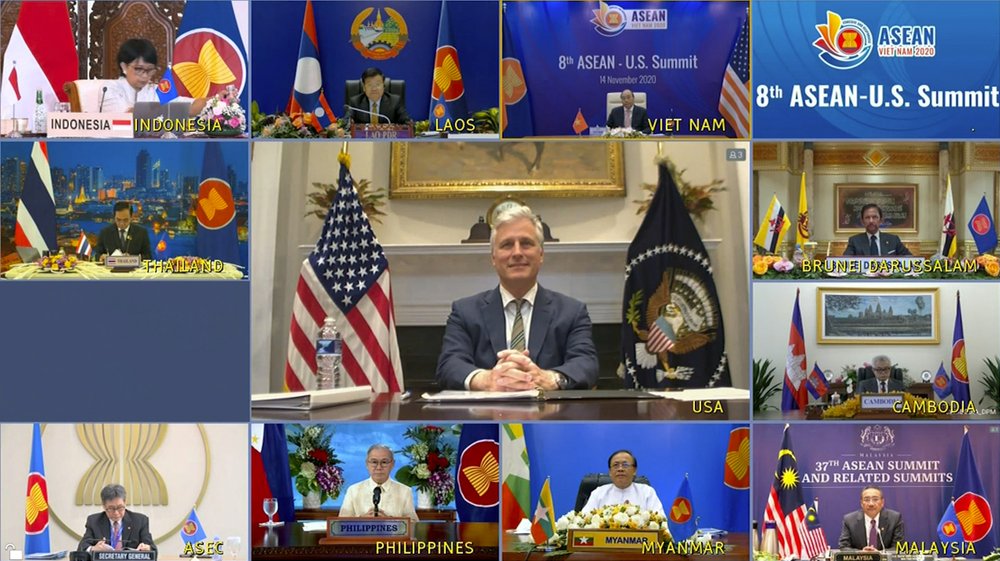 This image made from a teleconference provided by the Vietnam News Agency (VNA) shows U.S. national security adviser Robert O’Brien, center, with leaders of the Association of Southeast Asian Nations (ASEAN) during a virtual summit Saturday, Nov. 14, 2020. (Photo: AP)

National Security Adviser Robert O’Brien said Trump regretted he was unable to attend the online summit with the 10 members of the Association of Southeast Asian Nations, but stressed the importance of ties with the region.

“At this time of global crisis, the U.S.-ASEAN strategic partnership has become even more important as we work together to combat the coronavirus,” O’Brien said in remarks at the opening ceremony, which was livestreamed to ASEAN members watching from their respective countries.

Trump attended the ASEAN summit in 2017, but sent only representatives during the last two meetings. A special summit with ASEAN that he was supposed to host in Las Vegas in March was called off due to the pandemic.

Trump has been busy challenging the results of the Nov. 3 presidential election, insisting he was the victim of election fraud. Most countries have acknowledged Joe Biden’s victory.

The White House said in a statement that O’Brien was also representing the U.S. at an East Asia virtual summit later Saturday that included ASEAN members as well as China, Japan and South Korea.

In his remarks Saturday, O’Brien touted ASEAN as the fourth-largest trading partner for the U.S., with trade reaching over $354 billion last year.

He noted that the U.S. had contributed $87 million to combat the coronavirus in Southeast Asia, including providing American-made ventilators and PPE.

“The United States has your back and we know you have ours,” O’Brien said.

“Facing a possible second wave as winter is setting in, we can work together to mitigate the pandemic and to reopen the economy,” said Chinese Premier Li Keqiang.

South Korean President Moon Jae-in said the region must work together toward the development and equitable supply of vaccines and treatments, and establish an effective mechanism to prepare to battle new infectious diseases.

He said the speed of global economic recovery will be very uneven amid trade protectionism and uncertainties in the financial markets. An accelerated transition to a digital economy could also widen the gap between social classes, Moon warned.

“We must work to strengthen the resilience of our economies and identify measures for inclusive, sustainable growth,” he said.

Japan and South Korea have committed $1 million each to an ASEAN COVID-19 fund, meant to support member states in securing medical equipment and finance research on drugs and vaccines against the coronavirus.