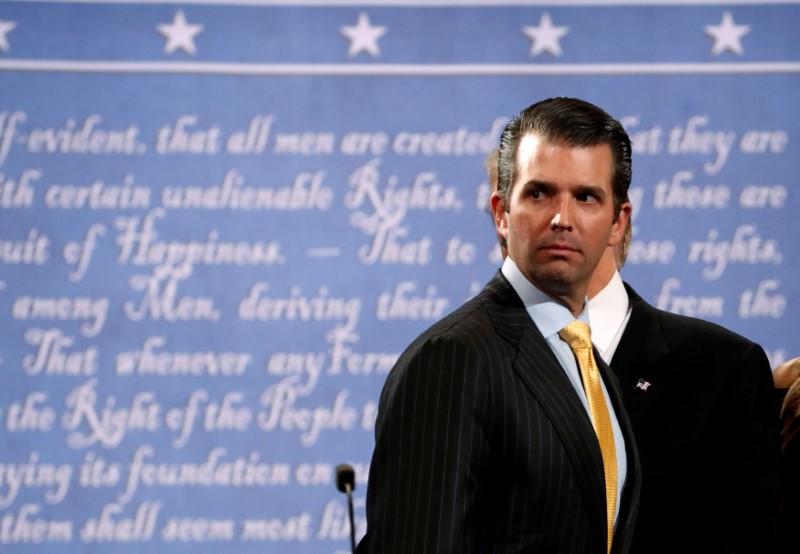 President Donald Trump's eldest son and a former business associate of the president are due to testify to the U.S. House of Representatives Intelligence Committee, as it continues its investigation of possible Russian involvement in the 2016 election, sources familiar with the schedule said.

Donald Trump Jr. will appear before the committee on Wednesday and Felix Sater, a Russian-American who was a former Trump business associate who claimed deep ties to Moscow, as soon as Thursday, the sources said. Neither session will be public.

Donald Trump Jr.'s attorney declined a request for comment on his Wednesday appearance, which was first reported by CNN.

An attorney for Sater, Robert Wolf, did not respond to a request for comment. Another source said his session with the panel had been set for Thursday but might be rescheduled.

The panel is one of the three main congressional committees, as well as Justice Department Special Counsel Robert Mueller, investigating Russia and the 2016 U.S. presidential election, and the possibility of collusion between Trump associates and Moscow.

Separately, Senator Dianne Feinstein, the top Democrat on the Senate Judiciary Committee, said on Monday she had made requests to three more people for information related to the Russia investigation.

Feinstein, who has made public similar requests, said she wrote to Rick Dearborn, a deputy White House chief of staff; Maria Butina, a former assistant to Alexander Torshin, a deputy governor of the Russian central bank; and Rick Clay, an advocate for conservative Christian causes.

She asked all three for interviews and for documents related to what she described as efforts by Torshin to arrange a meeting between Putin and Trump when he was a presidential candidate.

The Russian government has denied any effort to affect the election and Trump has dismissed talk of collusion.

A range of Trump associates has been called to testify during the investigation. Last week, U.S. Attorney General Jeff Sessions spoke to the House panel behind closed doors, as did Erik Prince, who founded the military contractor Blackwater and was a supporter of Trump's campaign.

A transcript of Prince's testimony could be released as soon as Monday. There are no plans to release Sessions' testimony.

Among other people with ties to Trump who are expected to appear in Congress are Jared Kushner, the president's close adviser and son-in-law, who had testified to the House committee behind closed doors in July.

Representative Adam Schiff, the top Democrat on the House panel, said last week that it would "very likely" be necessary for Kushner to testify again.

A Conaway spokeswoman did not response to a request for comment.