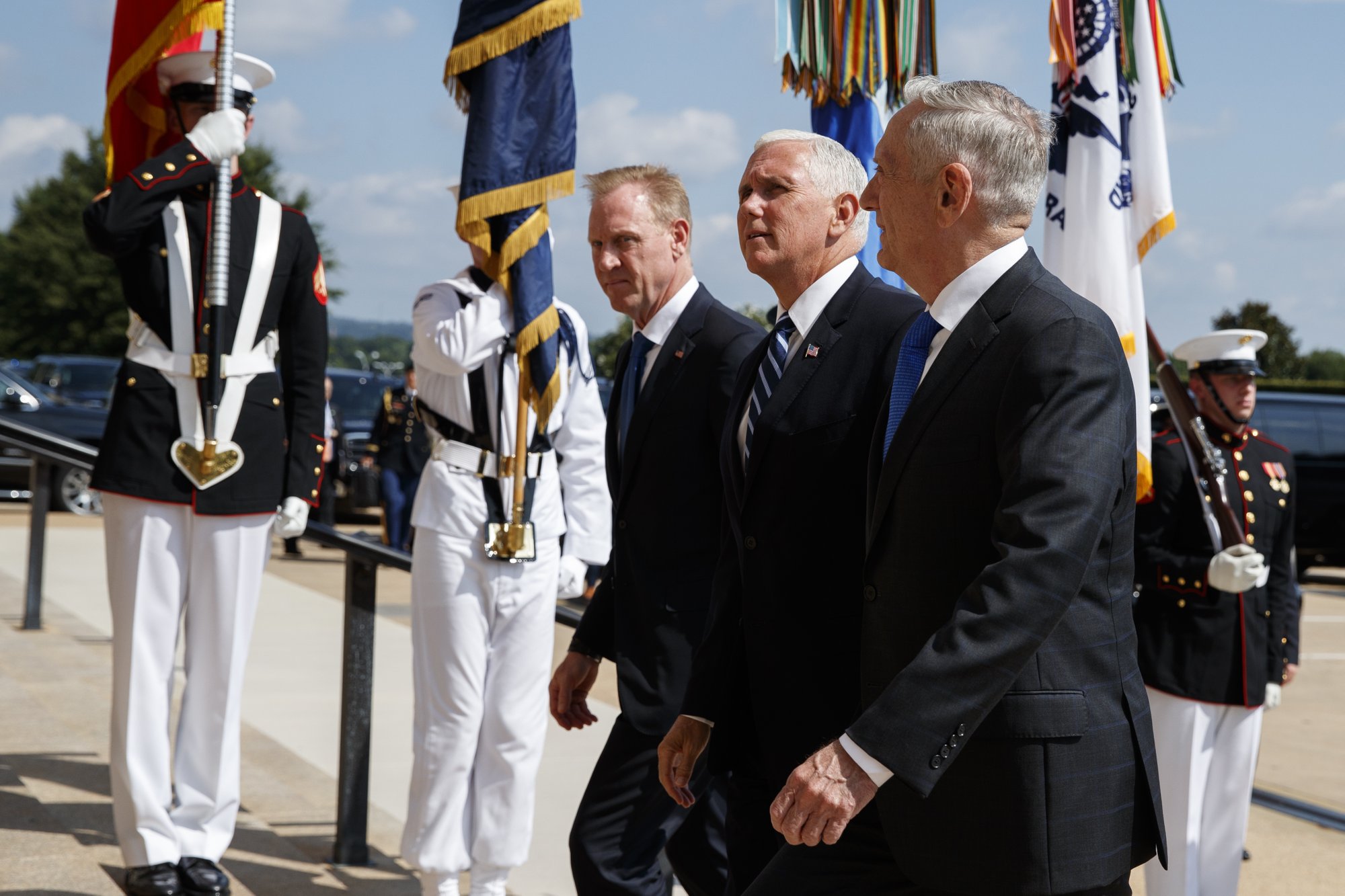 In this Aug. 9, 2018 file photo, Vice President Mike Pence, center, is greeted by Deputy Secretary of Defense Pat Shanahan, left, and Secretary of Defense Jim Mattis before speaking at an event on the creation of a United States Space Force at the Pentagon. (Photo: AP/Evan Vucci)

With his demand that the Pentagon create a new military service — a Space Force to assure “American dominance in space” — President Donald Trump has injected urgency into a long-meandering debate over the best way to protect US interests in space, both military and commercial.

At the same time, his approach has left many struggling to understand the basics, such as what a Space Force would do and how much it might cost.

The Pentagon is expected to have enough details filled out by early next year to include a Space Force plan in its 2020 budget request to Congress. Until then, the idea has taken on a life of its own at Trump’s political rallies, powered at least in part by his conflating of the nation’s civilian space program with the military’s separate role of providing space-based navigation and communications satellites.

At a June rally in Minnesota, for example, Trump alluded to his decision in December 2017 to refocus the civilian space program to human exploration as a first step toward returning an astronaut to the Moon. This prompted some in the crowd to chant, “Space Force, Space Force!” Trump responded by ticking off the names of the current military services and adding, “Now we’re going to have the Space Force. We need it.”

Earlier this month Trump told a rally in Kentucky, “One of the biggest applause I get wherever I go is when I talk about the Space Force.”

But just what is this thing?

Some may think it would assemble a razzle-dazzle new army for the heavens that would deploy soldiers in space or arm astronauts with galactic superweapons. Analysts say the reality is that building space muscle is more about reordering the way the Pentagon already uses space than about combat.

In fits and starts, the military has been trying for decades to reorganize and accelerate technological advances in space. Some blame the Air Force, which has had the lead, for underinvesting in space because it prefers spending on warplanes.

Details are still in play, but the main idea is this: find more effective ways to defend US interests in space, especially the constellations of satellites that US ground, sea and air forces rely on for navigation, communications and surveillance. These roles make them increasingly tempting military targets even as China and Russia work on ways to disrupt, disable and even destroy American satellites.

“This isn’t science fiction. This isn’t about creating space marines or some expeditionary space force that is going to go out and conquer the universe,” says Todd Harrison, director of the aerospace security project at the Center for Strategic and International Studies. “This is simply a reorganization” of existing space assets so that they can be use more effectively in a unified chain of command with one person in charge.

Still, questions abound as some in the Pentagon talk about someday basing anti-missile weapons in space.

Would a Space Force, which has yet to be authorized by Congress, consume an intelligence agency such as the National Reconnaissance Office, responsible for building and operating reconnaissance satellites? What about the Missile Defense Agency, which runs ground-based anti-missile systems that rely on space to defend US territory?

Also to be determined is how it would connect, if at all, to the security policy goals of US military allies and to US civilian space entities to realize Trump’s declared vision of “gleaming new spaceships” built to “conquer the unknown?”

Trump publicly raised the prospect of a Space Force in March. In seemingly offhanded comments to Marines in California he said, “You know, I was saying it the other day, because we’re doing a tremendous amount of work in space. I said maybe we need a new force. We’ll call it the Space Force. And I was not really serious. Then I said, ‘What a great idea.’”

Three months later, on June 18, the “great idea” became an order. Trump told the Pentagon to immediately get started on building a Space Force. Since then, “Space Force” has become a staple at Trump political rallies.

William D. Hartung, director of the arms and security project at the Center for International Policy and a longtime Pentagon critic, has written that “Space Force” could become the rhetorical equivalent of “the Wall” — “a big idea that appeals to Trump’s base but would be wildly impractical and hugely expensive to implement.”

Just how expensive it might be is a matter of debate.

The Air Force has estimated that it might cost $13 billion in the first five years. Others, including Harrison, say that’s an exaggeration. In late August, Defense Secretary Jim Mattis said he was awaiting staff work on an estimate to be included in next year’s defense budget request.

Tom Nichols, an author and professor of national security affairs at the US Naval War College at Newport, Rhode Island, said no one should think a Space Force will produce an economic windfall of space contracts.

“People who think a ‘space force’ will create a new economic boom don’t realize that our space infrastructure already exists,” he wrote an email, stressing that he was speaking in a private capacity. “Any additional spending will likely be concentrated in research and knowledge-centric areas, not depressed manufacturing states.” More to the point, he wrote, new weaponry is not in the offing.

“Put simply: We are not going to start building Klingon battle cruisers or the Moonraker fleet in West Virginia or Ohio.”

Misconceptions aside, Harrison and many other defense analysts argue that a Space Force is needed.

In Harrison’s view, it’s about consolidating authority and responsibility for national security space in a single chain of command: reorganization, in other words, and building a bigger cadre of space strategy professionals. He argues that the space workforce now is so scattered across the military services and the intelligence agencies that it has not been possible to create a viable career path that will attract the right people.

He likens the Space Force proposal to the creation of the Air Force in 1947. It was not built from scratch. It was made a separate military department after having resided in the Army as the Army Air Corps.

Although a Space Force would require its own civilian and military leadership and presumably its own uniforms and additional personnel, other steps to consolidate the space chain of command would be bureaucratic.

In fact, one of the main moves already in motion is to recreate US Space Command, which existed from 1985 to 2002, when it was disbanded to establish US Northern Command in the aftermath of the 9/11 terrorist attacks. Although Space Command went away, its functions did not. They were absorbed by US Strategic Command, and the Air Force retained its lead role in space through Air Force Space Command.