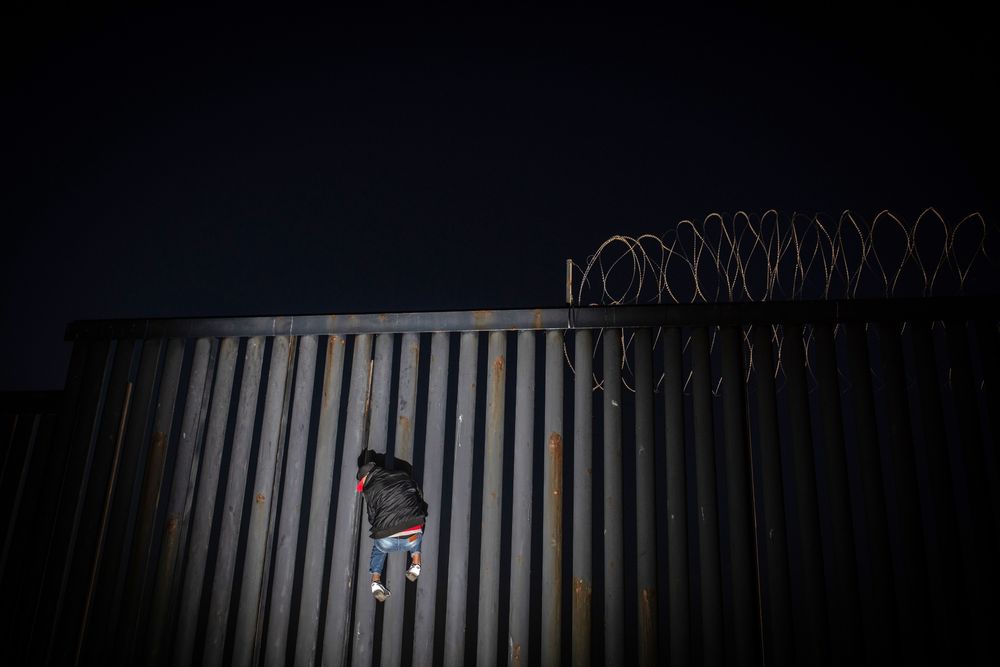 A man climbs up a section of a US-Mexico border wall at night in Tijuana, Mexico.(Photo:Bloomberg)

WASHINGTON, Jan. 2 (Xinhua) -- US President Donald Trump on Wednesday held firm on his initial request for 5 billion US dollars for funding the construction of a wall on the US-Mexico border, hours ahead of a planned meeting with congressional Democrats to bridge their bitter divide, which has dragged a partial government shutdown into the 12th day.

Trump was asked by a reporter at a cabinet meeting Wednesday morning in the White House whether he would accept a bill containing border wall funding below 5 billion dollars.

"I'd rather not say it. Could we do it for a little bit less? It's so insignificant compared to what we're talking about. You know, I've heard numbers as high as 275 billion dollars we lose on illegal immigration," the president said.

"The 5 billion dollars approved by the House is such a small amount compared to the level of the problem," he added, referring to the 5.7 billion dollars for border wall funding approved by the Republican-led House on Dec. 20. The bill was rejected by Democrats in the Senate on the following day, resulting in the partial government closure.

According to incoming White House Acting Chief of Staff Mick Mulvaney, the White House proposed on Dec. 22, the first day the shutdown took effect, a sum below 5 billion dollars for erecting the wall, but that, too, was rejected by the Democrats.

Mulvaney was referring to a proposal made by Vice President Mike Pence to Senate Minority Leader Chuck Schumer. It offered 2.5 billion dollars for a combination of border security and immigration priority funding. Trump was also reportedly opposed to this compromise by his own administration, instead repeatedly pushing for his original demand.

As the new Congress convenes Thursday and the Democratic Party regains House majority, the House, under the leadership of incoming speaker Nancy Pelosi of California, is expected to pass two separate bills aimed at reopening the government. Both bills, however, don't include Trump's wall money and are projected to be blocked by the Senate.

The first bill will keep the Department of Homeland Security funded at the current level until Feb. 8, including 1.3 billion dollars for border security. The other one, building upon six bipartisan bills, will fund the departments of Agriculture, Interior, Housing and Urban Development and others d by the partial shutdown through Sept. 30, the end of the current fiscal year.

"It would be the height of irresponsibility and political cynicism for Senate Republicans to now reject the same legislation they have already supported," Pelosi and Schumer said in a joint statement issued on Monday.

Republican senators, who still represent the majority in the upper chamber, are poised to take the bills off the table, as Senator Mark Meadows of North Carolina tweeted that anything that "includes zero money for a border barrier is a non-starter and will not be a legitimate answer to this impasse."

Donald Stewart, spokesman for Senate Majority Leader Mitch McConnell, also a Republican, said the Senate would only approve what will be signed by the president. "It's simple: The Senate is not going to send something to the president that he won't sign," he said.

Trump, for his part, called on Pelosi to engage in negotiations over the wall. He tweeted on Tuesday, "Border Security and the Wall 'thing' and Shutdown is not where Nancy Pelosi wanted to start her tenure as Speaker! Let's make a deal?"

Pelosi retweeted Trump's tweet, saying trump "has given Democrats a great opportunity to show how we will govern responsibly &quickly pass our plan to end the irresponsible #TrumpShutdown." She and Schumer have been using the label of "Trump shutdown" to blame the president for creating the gridlock.

The partial shutdown affects a quarter of federal agencies and leaves some 800,000 federal workers furloughed or working without pay. Enditem